On Friday, one of my three most recent Etsy orders came in, and between everything else, I wanted to take some photos, and put a few together. The package included 5 frames/settings for the cameos (three black, one grey, one pink) three of the ivory Victorian skeleton cameos, two grey octopi, and two ivory octopi. 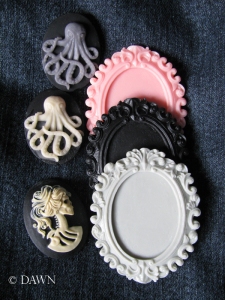 I had hoped that the grey octopus would match the grey frame, but no such luck.  However, the pink frame is a good match to one of the previously purchased pink cameos, so that went together.  I also framed the ivory skeleton and another pink skeleton in black frames/settings. 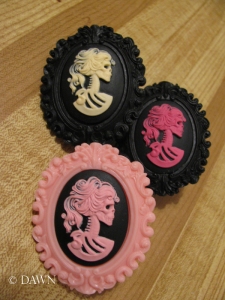 Pretty cute, right?  Well here’s a shot of me wearing one of them today – I had intended to wear it at the neckline of a V-neck dress, but the V is a bit too low cut on this dress, and I thought the pin would draw too much attention to my cleavage at work!

I’m really looking forward to the rest of the orders coming in – and a chance to get to the bead store in Northland Village Shops to pick up some flat-backed bails, because I am all out!