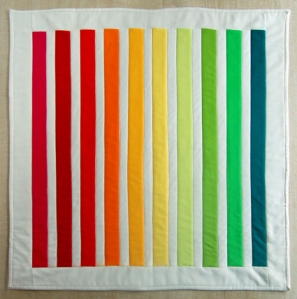 I love this mini-quilt from PurlBee, a simple stripe with the gradation of colours from red to blue.  I love the brightness, and how crisp the colours are against the white background.  I also just love how simple it is – simple, clean, and one would think, quick an easy to make.    It makes me want to make a similar variation myself – but with colours more my style (and more useable – I can only imagine trying to keep those crisp colours and white background with washing).

So, with Photoshop, I created a variation:

The first variation is with shades of blue – I like the idea of a gradient, and all of these fabrics would be left over from some of my other quilting projects – which I think would be a great way to use some of those fabric leftovers.

I have been thinking a lot about mauve and grey lately, and thought about a mauve and grey variation too.  I tried this with a lighter grey and didn’t like it as much… but with this slightly mauve darker grey, I kind of like this too.

I bought a new comforter a while back in shades of bronze, gold, and reds – and I thought that something to coordinate would be good.  I don’t know if I love these colours on black though.

Maybe on dark red instead? 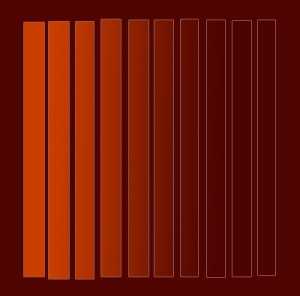 Or maybe on a lighter red, but then highlighting each panel with a lighter colour?  (Here I used white, but I imagine more of a gold…)

Of course, with all but the black and blue, I’d need  to do some shopping for the fabrics!

Hmmm once I get my sewing area back from Reno Hell part 2, I might have to think about doing up something!