Both quilting supplies and clothing

Earlier in July I was in Invermere, BC on a bit of a mini-long-weekend-holiday, and while my traveling companion was sleeping in, I popped into a little shop (the only fabric shop by the looks of things) called Essentials (which, conveniently was just around the corner from our hotel… though I did get led off-course by a library used book sale….).

Wow, that was a run-on sentence if I ever wrote one!

In this small town, Essentials plays two rolls – quilt/sewing/knitting store on one side, and clothing/department store on the other.  You can see from the photo above – if you turn one way into the store you get bolts of fabric and racks of notions, but if you turn the other direction you have dresses and sunhats.  It made it a bit strange for me, but likely it’s a necessity in a small town – it’s unlikely that there would be enough quilting business to keep a store of this size around in the long term if that were it’s only business.

(As an aside, they did have a space for lease sign up outside, and I overheard the managers (?) chatting about a new location, so who knows what it will look like in a few months!)

The quilting section was quite nice, with several shelves of fabric, and one shelf of nothing but fabric on sale – woohoo!  I didn’t find any Asian prints (one of the first things I look for) but lots of bright prints and children’s prints.  It must be interesting to ‘curate’ a store like this – trying to appeal to a wide enough market without stocking things that just won’t sell.  There was also a nice selection of cuddly fabrics for backings and flannelet fabrics too.

I was also on the look out for wool roving – but they didn’t carry it.  In fact, the wool/knitting section was quite small – there were a few things that were pretty, but nothing that appealed to me.

I also took the below picture to remind me of something similar to what I want to make with some of the fabric that I got there…. which, once I actually can get the chance to sew – I might share on the blog later! 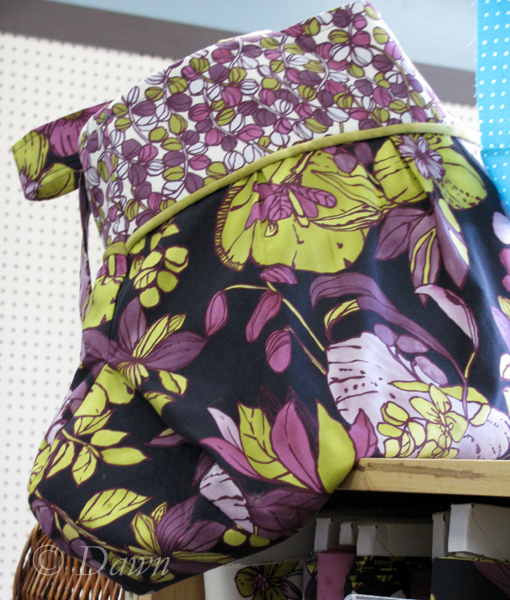 So.. the fabric itself – this gorgeous corset/dressmaking print cotton…

I took the above photo in-store, so it’s not great….

I also picked up some pretty tan and pink striped fabric, and two batiks from the sale table.

Now just to find the time/location/laundry/etc… etc.. etc… to make something up.  I really need to STOP buying fabric!

You can find Essentials (until they move!) at:

3 comments on “Essentials in Invermere”