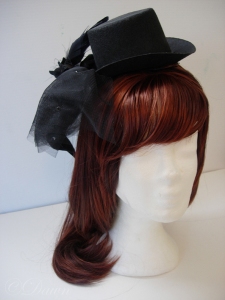 one of the mini top hat facinators I made prior to the class....

I am very excited – the class I have been waiting almost three years to take, I’m finally taking!  It’s a Millinery class (that’s hat-making) and we’ll be focusing on felts, straws, and buckram hats which is very exciting… I’ve made a number of “dressmaker” hats (and a few buckram-base ones too using the dry method) but I’ve never had the opportunity (or tools/supplies!) to make proper millinery hats.

Last Monday was the first class (yes, I’m being terribly late in reporting on it – but every night this week since I’ve been busy it seems!) and I think it will end up being a lot of fun.  The instructor seems very experienced and competent, and although we didn’t get a lot accomplished in the first class, we have several weeks to do a lot, so I think that it was a good use of time overall.

Now, it’s just time to start pulling out some of my inspiration images!  We’re starting with a pillbox hat (which I’ve made before, and don’t find very flattering for my face, but ah well) and I’m already thinking up ideas of how to adapt it to be more flattering and interesting. I’m certainly not interested in a pink wool boucle Jackie K style hat!

So, just a quick note about the class – hopefully in the weeks to follow I’ll have a bunch of new photos and pretty, pretty hats to share!

(Of course, as a teaser for they as-of-yet not planned ‘advanced class’ the instructor teaches, she mentioned facinators and sinamay hats too…. so if there are any other Calgary millinery fans out there…. she needs a minimum number to run the class… *hint hint*!)

I haven’t done much in the way of book reviews yet, but it’s something that I am interested in including in this blog…

So, the first book on my shelf is Bags with paper and stitch.  I am working on a few bag projects right now, and was very interested in being inspired by other designers and artists to see what I can work with myself.  The book Bags with paper and stitch by Isobel Hall is much more of an artist’s showcase than a ‘craft’ or ‘sewing’ or even a ‘how-to’ book.  There are plenty of instructions, but the work really seems to be more about showing off her amazingly beautiful works of functional art – rather than a book for someone to follow along with and use to create their own bags.  There are some great ideas and some beautiful inspiration, but the author also talks about a lot of products that the average sewer/crafter might not have, know where to find, or even know what the items are.

I know that a lot of the time I’ll go into a hardware store and have a specific “thing” in mind, but without knowing what it is actually used for – it’s nearly impossible to find amoung the towering shelves, or get assistance from a sales clerk who knows about routers and snakes – but nothing at all about how to create a functional, moving set of leather and tin claws for a Steampunk Jabberwock costume… (and, even in the city of over a million people, we STILL don’t have a Steampunk Jabberwock supply shop…. 😉  )

For instance, the author talks about:

Another project that made me think that this feels more like an art-book than a how-to or craft/sewing project book was the instructions for making silk paper.  The paper itself is beautiful, but in order to be a functional purse, the author recommends that you’ll need to reinforce the outside of the purse with fabric – to me, this would ruin the point of having the lovely hand-made silk paper, and make that part of it unnecessary if you wanted to really make a functional bag.

So – if you want to be inspired by beautiful textile art – definitely pick up this book.  However if you’re more in the mood for a book with projects you can accomplish this weekend, then this is probably not the right book for your collection.

So, after my last two posts about felt flowers, I wanted to share a less-than-successful project.

I picked up a card at Michaels in the scrapbooking section with two really cute felt flowers on it – they are adorable, and I thought how cool it would be to have one in a larger size or something…. 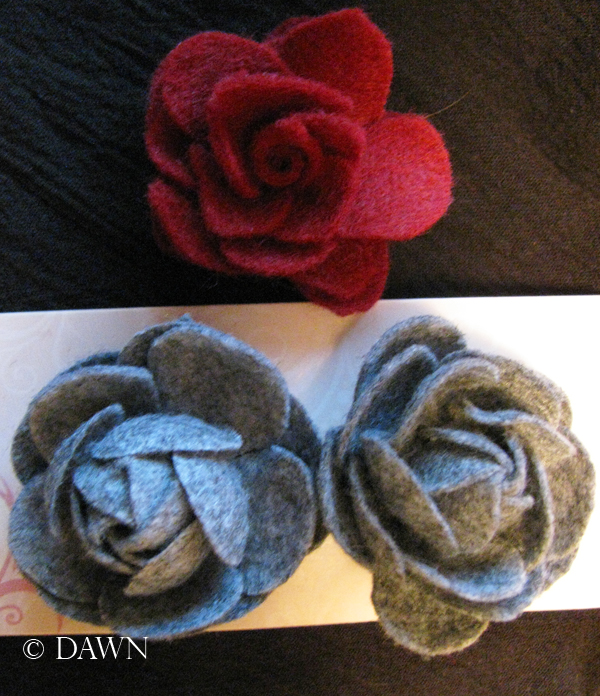 not nearly as successful

Obviously the originals are the grey ones, while my attempt is the red – this was a lot more time consuming to cut than the other flowers I made and posted about earlier – and because I wasn’t nearly so careful with my petal shape – it also doesn’t look nearly as nice.  I really do like the concept, but my execution wasn’t great.  Boo.

While blog-surfing, I came across textile designer Ruth Singer, and I absolutely loved her Amelia broaches, and after the previous faux felt floral facinator, I wanted to try my hand at another way of using felt for flowers.  Unlike Ruth Singer though, I didn’t necessarily want to make a broach – nor did I have access to the gorgeous lambswool/angora/cashmere knitwear for felting to start off with – so I stuck with the old Eco-felt from Fabricland instead – though I like the result enough that I might have a thrift-store shopping trip in my future!  (Unless any of my dear friends have a lovely sweater they’ve accidentally shrunk beyond recognition in the wash?) 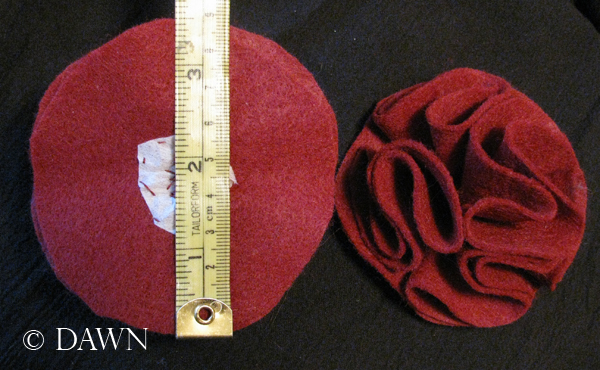 So, I made my first one in red, with a base of about 3.5″ (about 9cm) in diameter. I tried a few variations in the petal shape as well, and actually was quite happy with all of them.  I did some with more petals and some with less – again, using nothing but the Eco-felt.  I think this will give me a good idea of what I want to do when I work with different felts.  I also did one in a heather -grey (not just the red) which I really love.

I did a separate backing for it (to hide the pin or support and cushion the clip) and stitched or glued them on to make hair pins.  I also did another red one a bit smaller (about 6cm in diameter) and put a broach back on that one.  My favorite though, I reserved for this facinator. 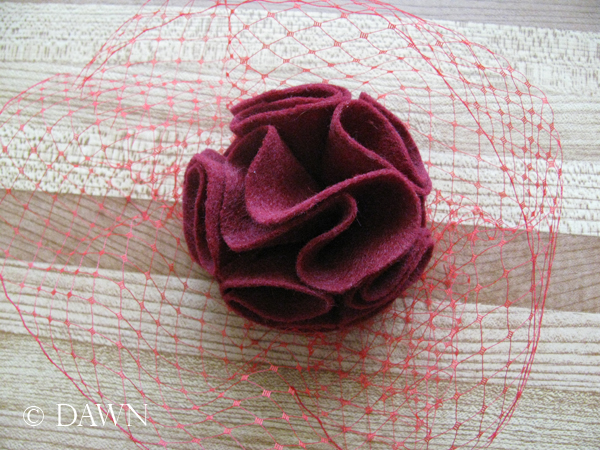 This has two panels of red French/Russian veiling (the vendor said that the two terms are interchangeable, however I’m not totally sure on that, so I’m using both!) creating a full circle of veiling around the flower.  It’s attached to a hair clip, for an adorable little floral facinator!  This was a bit time-consuming to make (just due to the hands-sewing) but really cute, and fairly simple too.  Hopefully I’ll get a snapshot of it being worn sometime soon!  Perhaps I’ll need to make a new one for every day of the millinery class that I’m taking.  It starts at the end of the month, and I’m very excited!

During my regular internet wanderings, I found a tutorial for a faux floral (using felt) pompom fascinator, and wanted to give it a try myself.

I’ve had a hard time finding wool felt at my regular fabric and craft stores – so for this project I started off with fake felt from Fabricland.  I did find wool felt at a few places subsequently, but figured that the result was ok with the fake stuff (it’s called EcoFelt and is actually made from recycled pop bottles!) so I didn’t need to cut into my (much more expensive!) real wool felt.

The Grosgrain Fabulous blog has really good directions along with clear photos, so I’m not going to replicate them here – but instead just share my own project! 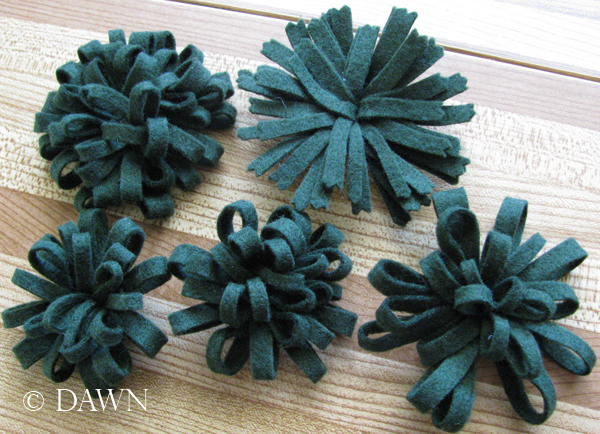 A whole bunch of felt flowers

I started off making a bunch of different flowers using the basic instructions.  Some used more felt than others, some had different widths cut, and some were made from angled felt rather than straight-cut felt.  Ultimately I liked one of these better than the rest (the one on the top left) so decided to use it for the first project. 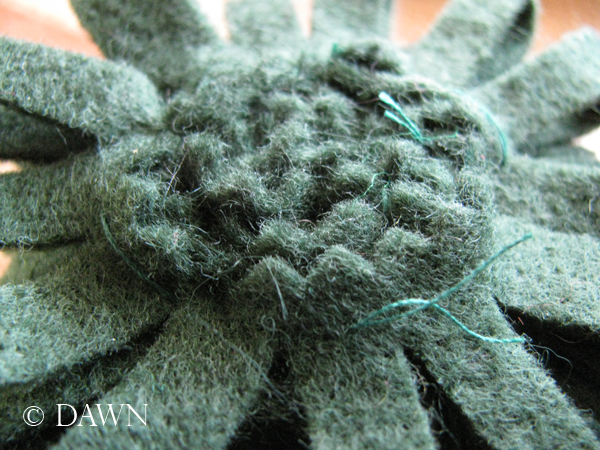 Underside of the flower - the pinked edges are from the side that met with the other flower.

The base of the flower is really flat, which makes it easy to glue or sew to other things. 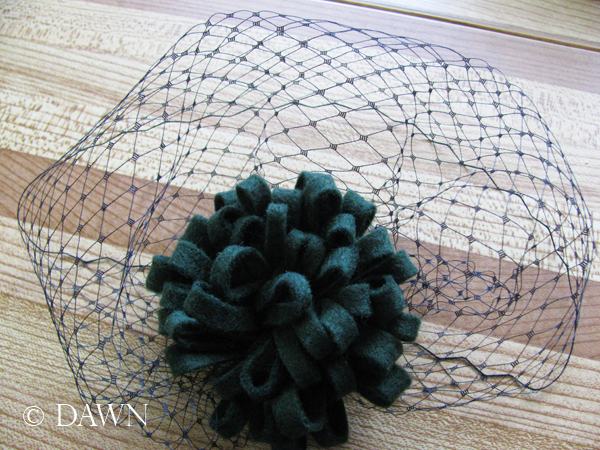 With the clip and veil attached.

In the tutorial, the author made  a headband facinator based on a plastic headband.  I always find that these pinch me, mess up my hair, or are just plain uncomfortable – so I decided to do mine using a clip instead, and make it a bit smaller – more like a hair piece than a facinator.  I added some French/Russian veiling,  in a bird-cage style, and added the hair clip. I also made a second with one of the smaller flowers and just put a clip on it (no veiling).

It’s super cute, and I think I’d like to repeat it with a different colour – possibly trying to do something larger and more facinator/hat-like!