When I started thinking about my “Mysterious Sub-continent Steampunk” costume, I couldn’t help also think about an Asian-inspired Steampunk costume as well.  I thought about doing a bit of research to start off to see a) if there are interesting things already being done b) if anything appeals to me, and c) if there’s anything I really want to do… 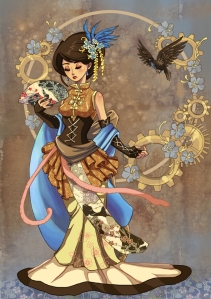 To start off – one of the images that first got me thinking about this was from Fragile Whispers on Deviant Art.  I agree – I think this would be a sweet costume to make – though if I were going to make something like this, I’d make some significant changes for myself and my own body-type.  I like the colours (for Steampunk that is) with the golds/browns/creams/etc contrasting with the small touches of blue.  I like the corset and the bodice top, along with the bustle-like overskirt.  The front panel really does make it more Asian, along with the closures on the bodice, however beyond those touches it really requires the styling for the “Asian” element to come through. Still, what a great inspirational image!

Next up, another image from Deviant Art, this time from an artist Laui Lashire.  I don’t think the art in this piece is as successful, though I really do like some of the elements she’s captured.  I love the kimono sleeves (with the banded top), the harness, the bustled overskirt/apron, and the wrap-front top.  This definitely feels more ‘modern’ steampunk vs. Victorian steampunk though, and I think I’m leaning more to the Victorian side of things…

This next one I LOVE.  It’s very much comic/graphic novel/illustration style though – more about the ‘story’ than what she’s actually wearing (which means that it’s often hard to interpret). This is from Mongrel’s Sister on Deviant Art. I think it’s the details in the image below that really work for me – the extra-large brass grommets on her tall boots with the embellished heel – along with the little peacock knot covers… the neck collar with the bow and cameo, the smoking headpiece with cogs and clock hands…  and despite the intense colour (which the artist says is slightly different from the expected Steampunk colour scheme) I adore the colours as well – the red looks so lush and ornate…  (I don’t totally dig the mis-matched eyeshadow or the bow tied in the front for the obi, but I digress…)

From Mongrels Sister on Deviant Art - click for original

Also from Deviant Art I thought I’d share a photo of a costume – I think this one is a little more on the nose than I’d like to go for, but I can appreciate the thought behind it. This is the Steampunk Kimono from Tanya.  Another that I found, but didn’t love enough to post an image (but still wanted to include for reference sake) is by artist Pooling Waters, and his Steampunk Geisha.

Another image like the one above – where it’s more cartoon-y and less realistic is from the “Opium Fashion Agency” which appears to be clothing for computer game characters.  I only understand this in theory, having never played these games nor had any interest in playing… but nonetheless – cool costume!  I can’t say that I love the British flag use – though I can see this becoming a beautiful contrasting fabric instead. (Click here for a super-large version.)  There are some really cool details in this costume too – the little tiny hat, the tiny ‘Chinese lantern’ hair sticks, the neck corset, the gears/chain/keys embellished corset, the bustle…  There are also some elements I don’t care for as much – the bustle doesn’t seem to go anywhere -there are red bows at the sides for all of the pleating – but it’s nowhere to be seen in the front, and I don’t like the tiers of ruffles on the sleeves.  Still I think it’s a really interesting interpretation of the theme.

Next up… now this is really interesting!  From Nerf Gun Bobbins, a geisha costume from a contest.  I think it’s the strapping that really makes this one work… using a traditional kimono shape, with kimono fabric, and then adding the strapping and buckles to connect pieces and transform the overall structure into something quite different.  On the downside, as a Steampunk costume I don’t love the colour combination, but like the overall effect.  This too is a bit more modern than I think I would want to do – though I can definitely see how this could be adapted by making the length longer (my heart dreams of floor length, but the part of me that hates having my dress stepped on will settle for ankle-length), adding a bustle, perhaps doing something in the neckline area.. etc…

On Craftster there’s a costume (top) taking a straight jacket, cut in Asian-inspired brocade, and with a small bustle added into the ‘tail’ of the jacket.  It’s not what I want to do, but I thought it was interesting enough to include as well.

I would be foolish to try to put together any inspiration post for Asian-inspired Steampunk without including a photo from DragonFly Design’s Steampunk Geisha.  I adore pretty much everything she’s done here from the colour scheme (although I can’t say I’d be able to wear that golden-green shot dupioni silk corset!) to the cut, to the accessories.  It seems like a beautiful fusion of Victorian Steampunk and Asian.  With this outfit, it really is the accessories that sell it – though the costume itself is wonderful too.  Click the link to see more photos in-progress as well as lots of up-close photos of the accessories and back views with a beautiful bustle.

Years ago I found a post and some photos by a woman who made a Victorian Polonaise out of sushi-print fabric, and although this isn’t what I actually want to make, it certainly has some of the flavor of what I have in mind.  I hunted and hunted over the web, thinking I remembered it from the Great Pattern Review Truly Victorian page, but after not finding it there, and being curious about the other patterns, I finally found it on the Past Patterns page instead. The #904 – 1880’s Polonaise and Walking Skirt is near the bottom of the page – click the link for a photo.

So – jumping off from there, I think that Truly Victorian TV410 – 1873 Polonaise would be a good start for a pattern, and I love 1880 Split Pannier Overskirt… though I don’t know how it would look on me.  Ah.. I think sketching needs to come before patterns!

So… do you have any other ideas – cool photos or interesting links to share?  Please send them via the comments at the bottom of this post!

6 comments on “A Steampunk in Tokyo”