Photo of the poster - click for a larger view.

Set in 1820, this movie takes place in the very last decade of the Georgian period and although I didn’t care for the dress itself, I did like the structure of the hat quite a bit.

I also was amused that I have this fabric!  (But in the red colourway, vs. the purple.)

From the costume’s poster: (click for a larger version)

…..
Amy, the Little Dorrit of the title, is a bit of a paradox.  She cares for her father while he is in debtor’s prison and later bears, uncomfortably, his fortunate change in circumstances.  This costume is worn by Amy after the family comes into money, but the dress reflects the rag of a dress she previously wore: the fabric of this dress is much richer and the shape has been updated, but the colour, the stripes, and the bodice detailing are very similar to her previous wardrobe.  It tells us that Amy Dorrit is paying lip service to her new wealth while her heart leans towards simpler times.” 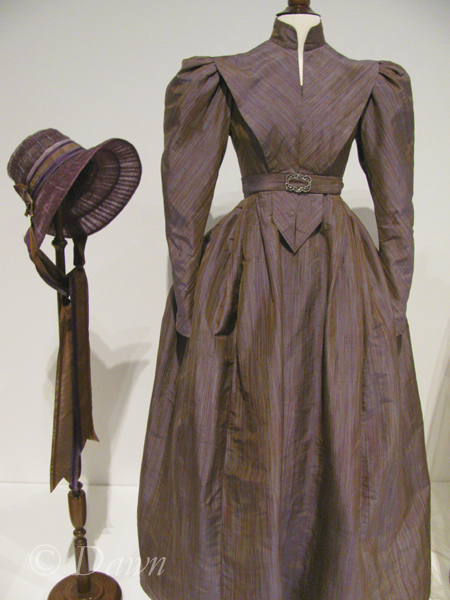 Above is a full-length photo of the dress along with the almost-matching hat.  The fabric is made of a bunch of very tiny narrow (single thread) stripes in colours from greenish-brown to dark purple, and the overall effect is almost like a shot fabric – with the colours sort of moving between brown-purple and purple.  It is striped, but since the stripes are so narrow, the effect is very subtle. 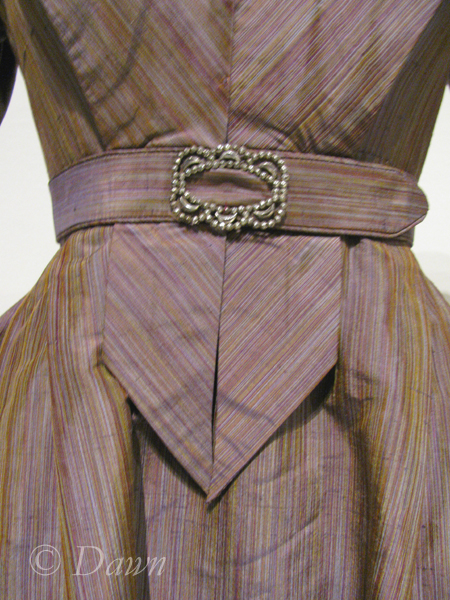 The waistline of the bodice is very interesting – It makes me think that the collar is a over-lapping piece, held down by the belt.  It’s interesting – but I imagine it would be difficult to wear neatly – every time you moved, the fabric might come untucked just a little – so perhaps there are also unseen buttons or snaps holding the “collar” ends down? 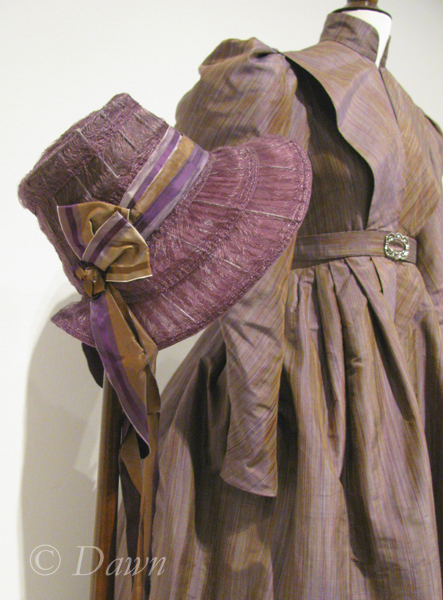 Another shot of the outfit

More interesting to me, as I mentioned, is the hat.  It’s completely a wire-frame bonnet with white wire, covered in a purple ruched sheer fabric.  The whole thing is topped off with a hatband/ribbon/bow in purple, mauve, and brown to coordinate with the dress itself. 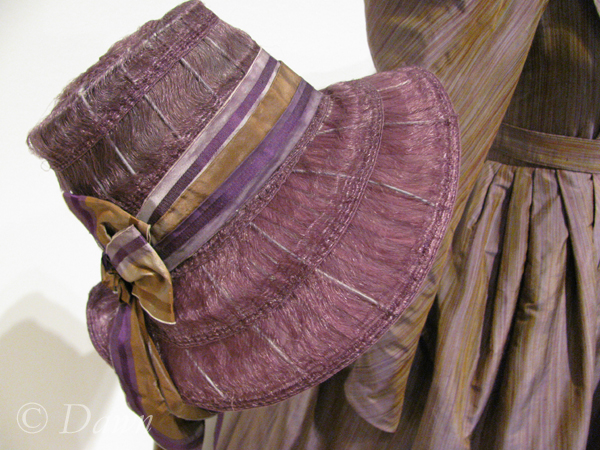 Side of bonnet showing the wire frame

The wire was VERY visible in the museum exhibit.  Check out a screenshot from the miniseries on the BBC America shop. 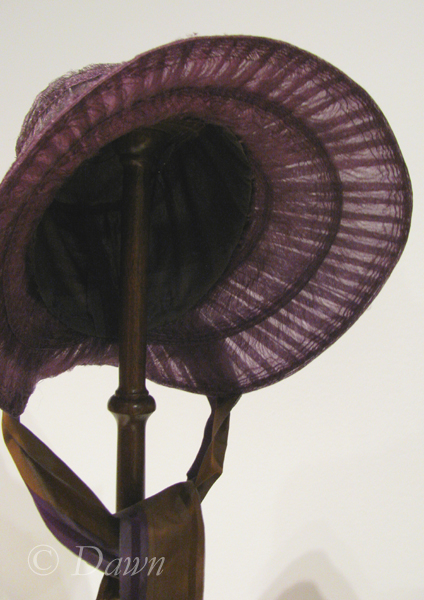 Under side of bonnet

I wondered why the hat needed to be a wire frame rather than a covered hatform. Did the material really need to be sheer?  I think that the ruching really shows up nicely in a shot like this – seeing through the sheer fabric and seeing all of the pleating involved, but is it necessary?  In a shot like this (click for link to feminema on WordPress) the bonnet brim is very visible, and the benefit of the sheer fabric is more obvious, while the wire frame is less important and less visible.

Of course, Little Dorrit is yet another one of the films/miniseries/etc featured in the Cut! exhibit that I haven’t seen.  What do you think of the costume nonetheless?