In the continuing saga of posting old photos while I’m clearing off my computer, I have a super-quick post about Marshall Discount Fabrics in Edmonton. 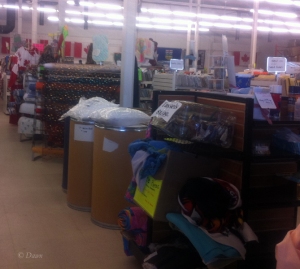 I was up there about a year ago, so who knows what it is like now, but I was actually kind of disapointed.  I had expected something like Dressew in Vancouver, but they had far less selection, and the prices weren’t nearly as good.  They also weren’t as well organized it seemed (which is saying a lot, since Dressew often seems to be a fabric-war-zone!).  Still, I did get some really pretty black and pink striped taffeta (which no, I STILL haven’t done anything with yet…)

Would I go there again – sure.  Would I make a POINT of going there if I wasn’t anywhere in the area or didn’t have a ride? No.  I can see the appeal for the costuming crowd though – lots of fun fur, spandex and other shiny things, though the price point wasn’t as fantastic as I would have hoped for a “discount” fabric store.

They also have Lethbridge and Winnipeg locations – if you’ve been to more than one, leave a comment about how they stack up against one another!