Although I’ve read a bit about the wide colour range available before when researching other eras, while I was looking around online, I also found some other information.
The examples below are from http://www.bushcraftuk.com/ and are from the UK, but likely show what would have been available to the Vikings as well (if not native to Scandinavia, then certainly through settlement…) 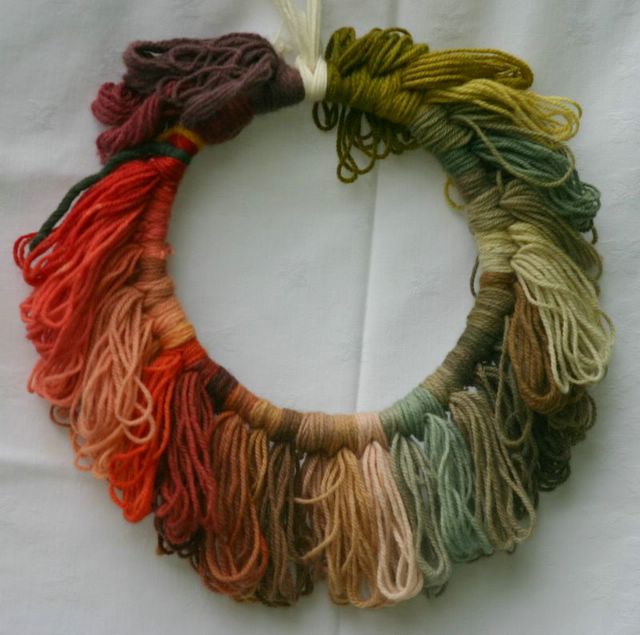 In creating the above examples, the author explains that she (?) used over 150 plants, and used roots, bark, leaves, shoots, berries, fungi, flowers, along with alum, iron, copper, urea, salt, vinegar, tanin and lixivation as mordents (fixatives). For instance, for the greens, the original poster used nettles, and then used alum, copper and iron as a mordant, where as the bright orange, yellows, and peaches came from Madder. 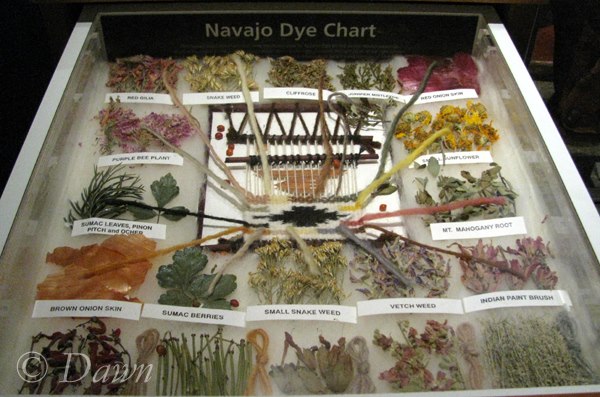 So. while more muted colours might ‘look’ more authentic, realistically pretty much any colour is possible!

Rather than making up a whole new post, I thought I’d add to this with some of the other examples I’ve found online.
Regia Anglorum, an Anglo-Saxon, Viking, Norman, and British Living History group are taking part in a Natural Dye project. They have produced dyed colours ranging from soft and dull hues to bright, vivid colours on linen, silk, and wool. For example, their members have obtained:

I also started a Pinterest board filled with various examples of (what I think are reputable) examples of colours available to Viking Age dyers.

Viking costume inspiration: From around the internet

So the next group of photos are just random photos from around the ‘net.

The first is an underdress, only made interesting by the heavy use of accessories. This would certainly be a less time-consuming costume for me, since I already have a few suitable costume under-dresses. This one is from tumblr, and shows the dress, with one wide waist belt, a torc necklace, another low wrapped belt for the sword, and a bunch of other things. From another photo on the same page, there appears to be a drinking horn and two small pouches hanging from this belt as well. There’s also a fur ‘shawl’ worn over one shoulder, tied with a cross-body tie. In another photo, she’s shown with the same accessories, plus a cloak pin holding the neckline together, a sideless tan apron, broaches with a varied-bead broach half-necklace, and a beaded necklace. It also shows a closer view of her hands, with several rings.

END_OF_DOCUMENT_TOKEN_TO_BE_REPLACED

What fun! So many of the viking/ pagan metal bands I listen to have such cool costumes and artwork. Some of the bands I love/like include:
Amon Amarth

and some of them have/had female members and wear costumes of some sort… (if you know of any other bands in this genre that I should check out, let me know in the comments below!) Some of these bands are dressed by Toxic Vision, a Canadian designer, so it’s a site to check out too in the same realm…

First up, accordian player Netta Skog, who used to play with “Battle Metal” band Turisas. The whole band performs in fantastical costumes (I have no idea how much face-paint they must go through on tour…)

Netta’s costume appears to have been a brown tank top, brown skirt made of a stiff fabric (or leather) trimmed with brown fur, brown tights, and then brown fur-trimmed boots. Accessories included a wide cincher/belt, arm bands, fingerless glove, and straps of various persuasions. Fun to look at, but not anything I’d want to replicate! This main photo is from Turisas’ Facebook page, but you can also see another shot, along with the rest of the band in this post on the “at least I’m housebroken” blog.
END_OF_DOCUMENT_TOKEN_TO_BE_REPLACED

My first inspirational link isn’t exactly historically accurate, but super-cute, and perhaps a neat way of previewing ideas – to research and check for a bit more accuracy. Online electronic “paper dolls” – this one is called “Viking Maker” and just like some of the other paper dolls I’ve looked at in the past, it has a bunch of ideas to try out – different styles, different combinations and different colours. Kind of fun too… 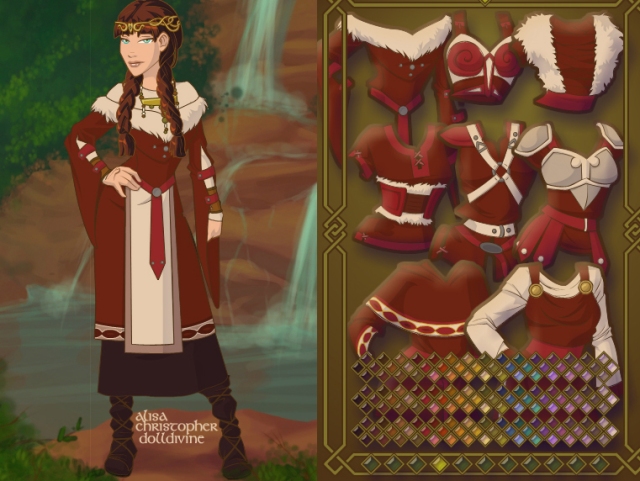 END_OF_DOCUMENT_TOKEN_TO_BE_REPLACED

**Update** I started to think about this a while ago, and then heard that a friend was planning a weekend-long Viking-themed wedding with costumes highly encouraged. I started working on the research and costume in anticipation of the wedding… though I wasn’t able to attend. Still,I thought it would be fun to blog about the “Garb From a Thousand Lakes” costume. Stay tuned!  END_OF_DOCUMENT_TOKEN_TO_BE_REPLACED