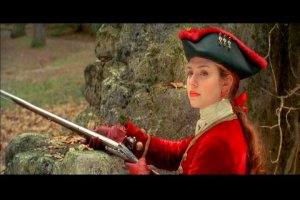 Screenshot from The Brotherhood of the Wolf from the Costumer’s Guide. My inspiration photo for a full-size tricorn.

In the first millinery (hat making) class that I took, I totally fell in love with felts, and really wanted to make a full-size tricorn hat.  I already have two mini versions, and in the process of taking the class also made two 3/4 size versions (red spiderweb and teal).  When I got my hands on a lovely black felt hood, I knew that it was destined to be a lovely black wool felt tricorn.  (Especially since I had already designated the red felt hood for a lovely top hat, and already own a black top hat…)

The first step was to steam the heck out of the hood.  Basically we just used a garment steamer in class, and I plopped the hood on top of the nozzle, let it sit there for a few seconds, turned it (being careful not to burn my fingers on the stray steam!) and let it steam some more at a slightly different angle.

Then I got my head block in my size (which was already covered in plastic wrap) and when the hood was nice and steamy, I worked it down over the block as I had for the other felts I had worked on in the class.  Since this was going to be a domed (rounded) top rather than the flat top, it went over MUCH easier than the red top hat.  From there I steamed using the nozzle as needed to get it to stretch to fit the block, and then let it cool.

Once the crown was cool, it was time to work with the brim.  I ended up stretching it out a fair amount using the steam while I was blocking the crown, which gave me a good head start.

This part I had to do at home, because the class by this point was over, so I worked in my kitchen with my kettle steaming away on the counter and worked the brim into the approximate shape of the tricorn brim.  I had to use my Styrofoam head instead of the wooden block, because with the class over, I no longer had access to the block.  I pinned the edges of the brim up into the crown, and then pinned (and then when that didn’t really work, loosely hand-stitched) the points together and steamed away. With the pins (and thread) holding the brim in place, I was hoping that the steam alone would work to hold the shape of the brim. 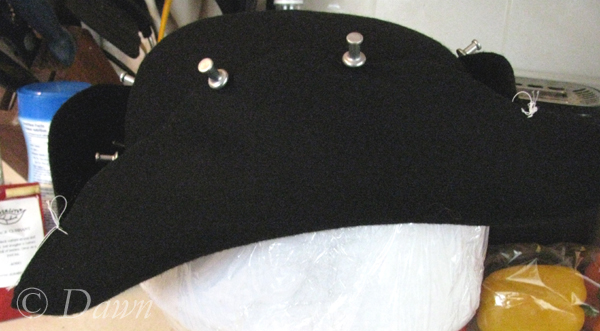 Once the wool had cooled off, I actually had to quit working on the hat for a while.  The class was over and I no longer had access to the tools, but also I ended up taking some other (non-related) classes, then we had renovations in our basement (where my sewing area is) and… well, insert excuse here.  If you sew or craft, you know that the excuses are plenty, and the results will wait.  (Usually when I get wrapped up in a DIFFERENT project!)

This delay… is why this post is being published SO late after I took the original class!

Wiring the brim of the black tricorn hat

Once I was re-inspired by the advanced millinery workshop that I took in April 2012, I finally picked this project back up again, and wired the brim.  For some reason – perhaps because I had been doing a fair amount of hand-sewing, this actually went a bit quicker than previous wiring had gone, but still probably took a good 45-60 minutes, just for the wiring alone. There’s no wonder why couture hats cost so much when someone has to spend this much time hand-sewing!

Binding the edges of the tricorn

From there I got out some 1″ wide grosgrain ribbon and folded it in half, curving it with the steam iron.   This I used to bind the edges of the brim.  I did this all entirely by hand, and tucked the binding in the pinches of the brim just slightly.  I then took it to the iron, gave it a little press, and reshaped the wire just a little bit (since all the tugging from the binding stitching had pulled it just slightly out of shape).

So… then another delay.

I didn’t really have a great excuse, but I took another huge long break where the hat basically stayed in the same state. I guess I was mostly uninspired.

Once I finally got back to the hat, I hand-sewed in a black petersham ribbon for a sweatband – after steaming the ribbon into a loose curve with a steam iron.

Once I started fussing with the hat a bit more I decided not to put a hat band on the tricorn. With the fully raised brim, it would never be seen, and I thought it would just be more fuss than I actually needed to put into the project.

I’ll admit, one of the things I was most delayed by was thinking of the trim.  I decided somewhere along the line, what I really wanted to trim it with was a big, beautiful ribbon cockade.  The problem – I don’t know how to MAKE big, beautiful cockades.  I found several online (that were hard to find and quite expensive too!) by craftspeople, and then started searching for books (to no luck), so I didn’t have that same *push* to get this hat complete while I still didn’t know what I was going to DO with it.

Finally I just grabbed some red petersham ribbon,  pleated and curled it, sewed it into a rosette, and then hot-glued it onto a circle of felt. I glued the felt onto a bar-pin, and then glued on a silver-tone and rhinestone jewelry element from  Michael’s craft store. I pinned the pin onto the hat brim, and then tucked a black and a red ostrich feather into the pin on the wrong side.