At work I’m the chair of our Social Committee, and one of our jobs this year was to plan a holiday party. Of course, it’s all very politically correct where I work, so we don’t call it a Christmas Party, and we’re actually going a wee bit out of our way to actually avoid anything that rings of Christmas… but I don’t mind one bit, because the theme that the committee picked was

Part of this, included going out and buying hats – partially as give-aways, partially as decoration, and partially as costume elements for anyone who shows up without a costume or something in-theme to wear and want to fit in. We’re going to have a photo booth as well, and hats will make great props.

This meant – I went shopping!

So many hats! First I went to Value Village, and then to the Halloween shop on November 1st – both places had their Halloween items on for 50% off, so I was able to get 38 hats for about $200.

I picked up: 13 hats that likely will appeal to men, 22 hats that will likely appeal more to women, and 3 hats that I think anyone would like.  These included:

If you were to come to our party – which hat would you pick?

Read more about our party on the other blog I write for.. Happy Sushi Belly!

So, with a sewing table kind of full of things, it’s a lot easier to focus on some of the small elements instead for this costume, so my next project was the belt. I have a ‘tablet weaving’ belt from another SCA costume that I could wear, but while I was at Tandy Leather I picked up some leather (1″ wide latigo)  for a belt as well, and thought it would be nice to make this up too.

END_OF_DOCUMENT_TOKEN_TO_BE_REPLACED 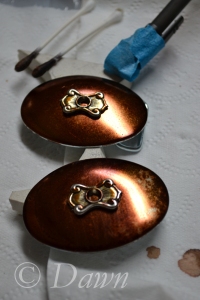 One of the first accessories for my Viking costume that I wanted to focus on was the turtle/tortoise/oval brooches which hold the apron.  The half-necklace/festoon hangs from these brooches as well, as does any other accessories like keys, needle cases, or grooming tools. I really didn’t think that I’d be able to make my own, so had been trying to figure out if I wanted to order them or not, when a friend said she had picked up hers as belt buckles from Tandy Leather.

From my previous post, here are the options I was considering:

Although I’ll be making a festoon to go with these brooches too, I also thought it would be cute to make a few other little things to hang from my brooches. I picked out some chain, some lobster clasps (which are totally inappropriate, but they’ll be hidden), and two vintage/antique keys – which aren’t right for the period either, but are simple and ‘close enough’ for the time being.

I also took a small scrap of leather and a metal ring and made a “needle case” – which is actually a little holder for my lip balm.

Keys and a ‘needle case’ to hang from the brooches

Stay tuned… I’ll be posting about my festoon soon!

After Millinery class #6, I took the black straw hood home to work on outside of class.  I envisioned the beautiful cloche like in some of my example inspiration photos, but it ultimately didn’t work out.  I just didn’t LIKE the cloche shape with my features.  For a review of the process up until that point, please read my post on the cloche.

So… reworking was in order!

I started basically by folding up the brim and seeing what shapes I could create.  I stood in front of the mirror twisting and folding and I’m sure making a lovely mess of things.  This is one of those tasks best done when home alone I’m certain, because anyone watching would have likely thought I was quite a ninny…

Ultimately, I found a shape I really liked, but by then I had turned the hat inside-out, so I turned it right-side-out, and re-folded the hat back into the shape that I had liked.  At this point I just left it sitting alone (so it could think about what it had done!) and only returned later to trim the raw edge with some gorgeous bias I had made for a previous corset project.  (Its purple shot with blue dupioni silk and it’s luscious!)  As with the blue straw, I could have put the binding on partially by machine and partially by hand, but instead I ended up doing the whole thing by hand.

Then I let the project sit – while I worked on other things.

When I got back to it…

When I got back to the project, even though I’d taken notes about the design, I looked at the hat, and thought “what was I thinking?” Not in a critical way – I just couldn’t see in it what I had seen before!

So, back to the drawing board, I removed the buttons pinning the hat into the shape I had created, and then used a generous amount of steam from my iron to re-shape the hat back into the original cloche shape. I tried this on… and suddenly… it worked! I don’t know if my face shape changed slightly, or if I just became less critical of my tall forehead (I did recently cut in some bangs/fringe, so that’s possible…) but it worked.

So, looking at some of my inspiration photos in the post I originally made about the cloche, I decided on a single-colour scheme with lots of black-on-black texture, and started previewing a number of laces, ribbons, flowers, appliqués, and other embellishments from my collection.

Using super-fine pins, I started layering up all of the elements that worked, in the approximate areas where I thought I’d want them to permanently reside.

Once I liked what I had, I grabbed my beading needle (since it’s long and super-thin) and started hand-stitching each element down, working backwards.

So, here are photos of the finished hat – what do you think? Let me know in the comments below! Maybe I’ll have the chance to wear it sometime soon and take some action shots!

So now that I have a good idea of what I have, and have some inspiration ideas, I need to figure out what I want to make and what I’ll need to make that happen!

I think that the most vital part to making this costume really work is the apron-dress (which even though after all of my research I know has  a few other names… but I’m sticking with this one for consistency..) along with the other items I already have.  I think this should be pretty simple depending on which of the several styles I want to go with. I’m inclined to go with the simple “tube” one-piece style myself, and think that the side-laced version with the skirt part open at the hips might be cute…  even if it’s not the most authentic.