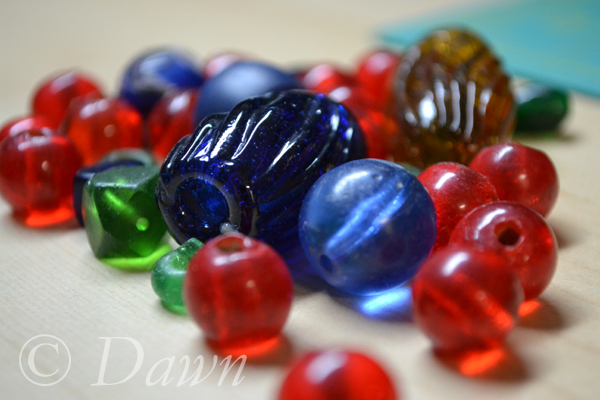 Along with the ‘turtle’ brooches that I mentioned in a previous post, I wanted to have the half-necklace/festoon that I’ve seen over and over again in the inspiration images. (Read more about Festoons here: Viking Costume Inspiration: Accessories: Festoons)

I went into my stash of ‘large’ beads that I didn’t already have designated for another project.

Looking at the inspiration examples, I knew that I didn’t want obvious symmetry, or even obvious matching. You have NO idea how hard that was for me! Instead, I followed some of the advice that I posted on my research post for this project, and picked focal pieces to go in the middle, and then equally-distant around the rest of the festoon, with less-important beads in between. This ended up being tweaked a few times, and eventually I made one, and then a second a bit longer.

I just used beading thread to string up my beads, which is strong enough to support the beads, but doesn’t add any shape itself like beading wire sometimes can. I wasn’t 100% sure how I’d be attaching the festoons to my broaches, so I opted to put large lobster clasps on the end of the two strands, which keeps the two strands together. I also added in a crescent-shaped metal pendant which was salvaged from an old necklace which works – for now – looking a lot like a Lunula.

Back view of the completed festoons attached to the ‘broaches’.

Close up on some of the sectional symmetry (Rather than radial symmetry) apparently preferred by the Vikings. I think this blue bead especially looks like some of the re-created ones I saw in the museum in Turku, Finland.

Attaching the festoon as well as the keys/needlecase to the back of the ‘broach’.

What do you think?

If you’re involved with Viking recreation – what do you think of my attempt? Any suggestions?