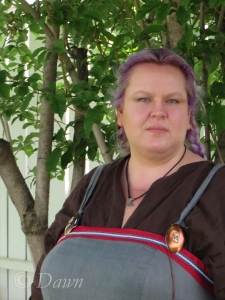 Quick photo after the event of my Viking garb

Although I started pulling together a Viking garb kit last year in preparation of a wedding (that I was unfortunately unable to attend) I finally had the chance to wear my outfit (as it is so far) to an event in June.

June 13-15, 2014 was the Barony of Montengarde’s Dragonslayer event.  (Website, Facebook event link) which is summarized as “… it is a weekend of Archery, Heavy Combat, Rapier, Arts & Sciences, and best of all: camaraderie.”  In the distant past I attended a few SCA events, and had thought this would be similar, but it was significantly smaller. At other events there were usually several things going on at once, lots of Arts & Sciences classes/workshops, lots of merchants selling neat things, etc… but at this one it was just one area visible to non-participants doing combat, and one tent with leather goods for sale. There didn’t seem to be any classes going on, as I could see everything going on in one glance as the site was so small in comparison to what I had attended in the past.

Still, I stayed for a few hours, watched the Rapiers and Youth Combat, talked to a few people, and for  a big part – checked out everyone else’s garb!

While I was there with a mundane purse and shoes (and my not-so-period lavender & silver hair!), I did take note of some of the deviations from some of the research I’ve been doing in some of the participant’s outfits. In reading some of the SCA groups on Facebook versus some of the more strict re-enactment groups (largely from Europe) it’s clear that SCA events are a lot more flexible on ‘authenticity’. (Which is good.. I have no intention of starting to hand-sew everything I make!) Some of the deviations I saw included:

I also saw a few things that I think were more SCA-isms rather than undocumented costuming choices – animal tails hung from belts, buttons and pins on a scrap of fabric off the belt, and decorated flag-things off the back of belts… I’m not really sure what any of that was about!

Note, I’m not identifying these things to infer that they’re “wrong”, but rather to remind myself about the difference between what I’ve been reading online, and how they’re interpreted at events by a variety of people. (Not to mention that the idea of “authenticity” should be flexible considering the lack of real evidence!) 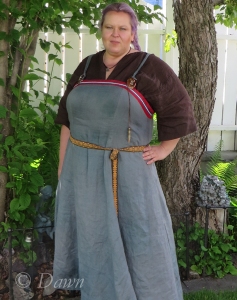 Quick photo in my garden of the Viking outfit – taken after the event.