Before I headed to Victoria, BC, I was keeping my eyes open for a Penannular brooch that I would like to purchase, but in the meantime I thought that I would try to make one of my own. I did end up getting my own ready-made, though I really like the ones I made too!  I’m sure there are better ways of making them, but since I don’t have much metal work experience, working with wire seemed like a good compromise that wouldn’t stress out my skill-set (or my budget!).

tools and materials for my Hand-Made Penannular Brooch

I made this brooch twice – once larger, and once smaller. On the first version I did  it a bit differently, but the second time I thought worked better, so here’s what I did:

Before I made my versions, there was a tutorial I found on Pinterest which recommends #6 copper wire for plumbing plus a brass braising rod.
However, I have also pinned this one from Deviant Art which uses a metal ring and Super Sculpty.

After seeing the large tortoise (oval/ turtle) brooches from Viking Age finds, I was struck how distinctly different this brooch was, from the Saga Museum in Iceland. The character portrayed is supposed to be a Celtic woman taken as a slave/wife by a Nordic Viking Age man, and taken to Iceland. The brooch is much, much smaller than the other brooches displayed (either the originals as seen elsewhere, or the reproductions in the Saga Museum) an has a pattern, size, and shape that reminded me of a cockroach! (Hence, I’m calling it a “roach brooch” even if that’s not the most flattering name! END_OF_DOCUMENT_TOKEN_TO_BE_REPLACED

A figure representing a speculative pre-Viking visitor to Iceland

The remaining figures that I haven’t already shared from the Saga Museum aren’t related to costumes I want to make, but I thought I’d share them nonetheless for anyone who might be interested.

END_OF_DOCUMENT_TOKEN_TO_BE_REPLACED

From the Saga Museum in Reykjavik

At the Saga Museum in Reykjavik there were several figures wearing armbands/bracelets. Rather than do a post for each of the displays and all of their various elements, I thought I’d organize the photos by the items of interest.

The first example is one of the figures representing one of the first settlers to Iceland. He has a twisted arm band on what looks like just below his elbow. This band appears to have a large bulb in the middle – similar to another armband that I have a bit better of a photo below.

He also has a bracelet-height arm band worn over his sleeve just above the wrist. It looks like a flatter kind of bracelet – with a stamped or engraved pattern in it. 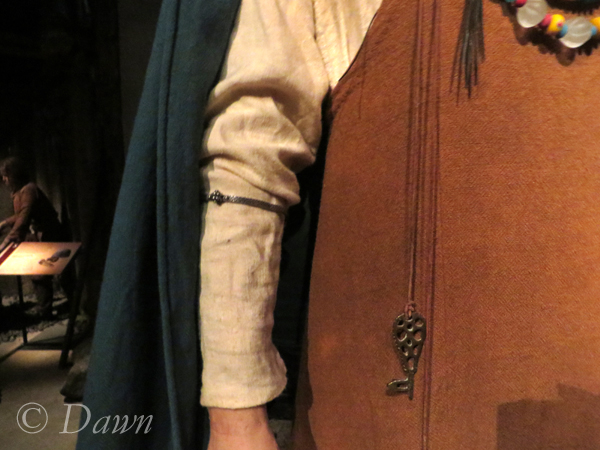 The female, above, has a similar kind of below-elbow arm band, which looks like a flat band (not twisted) also with a bit of a decorated bulge.

I wonder if the choice to put them on the arm below the elbow was a deliberate choice, or a matter of where the items they could get would fit on the already-existing wax model over the reproduction clothing? It seems like a good location if using the band to help hold up pushed-up sleeves, but not so much for general wear, where I would think something worn at the bicep would fall less frequently/easily.

END_OF_DOCUMENT_TOKEN_TO_BE_REPLACED

I still have lots of photos from the Iceland and the Saga Museum in Reykjavik – I’m trying to break them up thematically, so today I am bringing you some photos of scissors and knives – though like my previous post, it’s a super-short post on the topic, since there weren’t many examples to photograph. I’m focusing entirely on the couple pictured above, who you’ve seen from a few of the previous Saga Museum posts. END_OF_DOCUMENT_TOKEN_TO_BE_REPLACED