Some of the fabric I purchased at the 2012 sewing show

Earlier today I was responding to a post on Facebook, and it reminded me of the Sewing trade show that comes through Calgary once a year – the Creative Stitches & Crafting Alive show. A quick Google search later, and it turns out the event is at the end of this month! (There’s also a show this weekend in Edmonton for readers in our province’s capital.)

Learn more about the shows by visiting their website: http://creativestitchesshow.com/alberta-shows/

This year’s show is also being held in a new location – Spruce Meadows which raises another challenge for some attendees – the previous location was on a C-Train (light rail transit) route. Calgary Transit doesn’t go to to Spruce Meadows; those of us who rely heavily on transit will have to walk from the nearest C-Train station for over an hour, take a cab, or take a second bus followed by a 50 minute walk. None of these are really good options. When there are major activities at Spruce Meadows, often shuttles are set up, though I don’t know if the same will be done for this trade show… I have sent a few emails inquiring – none of the websites address this transportation issue.

With this in mind, I suspect the show might be a bit smaller again this year, but I figure I’ll try to go anyways. There are only two classes that interest me, and I’m shocked at how many classes they’re now offering with a (frequently very steep!) fee to attend. Since previously all of the classes were held in curtained areas, and were often hard to hear – I can’t say that paying $60.00 for a 3-hour class is something I’d see a lot of value in. Most of the classes are also about 30% content and about 70% advertising for the presenter’s booth or shop (or both), so that brings the value down a lot as far as I’m concerned as well.  If anyone attends any of the paid workshops, please leave a comment with your impressions!

So.. consider this a bit of a heads-up to the readers who didn’t know about the show at all, and a heads-up for anyone interested in attending. Hopefully it will be an improvement over last year.

Visiting http://creativestitchesshow.com/alberta-shows/ – clicking the image will bring up the run-book with class descriptions and a time-table, but just a warning… it wouldn’t open on Internet Explorer for me, crashed my Firefox, and would only print using Google Chrome as a browser.. so be patient! 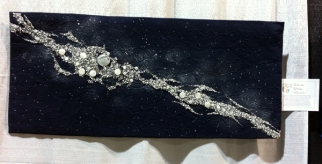 Sunflower quilt
Want some other impressions? Liz Africa from Janome Life has a post promoting the show, as well as an exact copy of the post on the blog Elan Life.
Advertisement