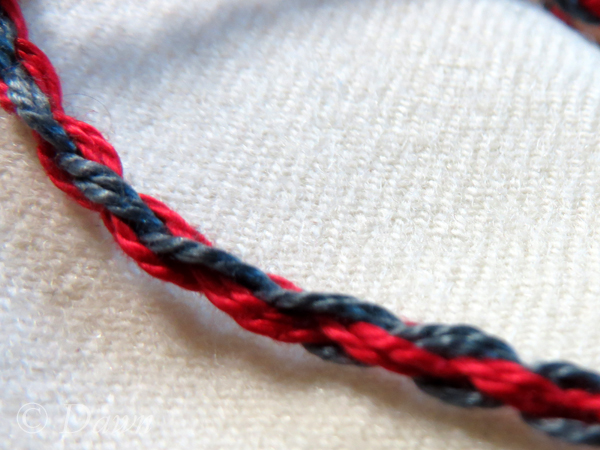 My first strand of whipcord

For one of the projects I’m working on,wanted to make whipcord for the trim. I hadn’t ever made whipcord before, nor did I know how to make it… so I figured this would be  a good time to gather some resources – first to see if whipcord is even ‘period’, and next to learn how to make it!

Is whipcord historically accurate for the Viking Age?

In my early searches, I wasn’t finding much of anything online to confirm the historical accuracy of whipcord – I only even knew the name from Pinterest posts and other costumers, so a lot of my early “research” was anecdotal – people saying it was “period” but not backing up any of those statements with historical evidence.  I’ve included some of them here just to start myself off….

The SCA Barony of Dubhaigeainn offered a class on making Viking Whipcord with the description: “Come learn a period method for creating a strong, attractive cord using a set of weighted bobbins.”

In the Collegium Caidis for 2005, the SCA Barony of Lyondemere lists a class in making Viking whipcord braid, but uses the term interchangeably with fingerloop braiding – which I think is actually something else.

Eithni has a document discussing the similarity between Kumihimo and fingerloop braiding  which I found interesting.

Annika Madejska – who does amazing costumes, used whipcord in her new Viking dress.

The anecdotal thoughts seem to be “yay!” on whipcord used for Viking garb – but the evidence is really sparse…

On the Medieval Baltic pages, there is a document called 4-strand Whipcord Braiding which indicates that cords have been found using this technique from the Danish Bronze Age. The unnamed author also indicates finds dating to Iron Age Finland, and then later from the 16th Century as well.

The Medieval Baltic document is also copied verbatim on Scribd.

There is a second Medieval Baltic page (rather than an article) which is attributed to Rebecca Lucas, and in it she discuses her skeptisism for the technique being used during the Viking Age, suggesting that the evidence is slim, and appears to have first been associated by Margarethe Hald’s Ancient Danish Textiles from Bogs and Burials.  She clarifies that it isn’t the resulting cord that she is skeptical about, but rather how the cord was produced.

Danr Bjornsson discusses the bobbins in his Whipcord Braiding Bobbins document indicating that he saw suitable bobbins on display at the Lehre Research Center in Denmark, but that he could not find evidence of any artifacts from the Viking Age.

Cathy has some challenges for the technique of bobbins being used to create four-strand braid in her post “Viking Whipcording?“. There’s an interesting discussion between herself and ‘Pearl’ in the comments that bring light to again… the cord being possible, just the technique being questionable.

I looked for additional evidence, but really couldn’t find a lot. The summary seems to be “nay” on the technique itself, but “probably!” on the four-strand braid itself… so I guess I’ll call it that instead 😉

How do you make whipcord?

Here’s a quick video showing two people doing a demonstration of making whipcord –  I like how big their bobbins are for this – it makes it easy for the woman (with her back to the camera) to catch the bobbins – though it looks like this is her first time doing this.

Here’s another video – it looks like they’ve just used small sandbags as bobbins! (Or something like that)

Finally, an individual doing whipcord by herself – since it’s unlikely I’ll always have a friend around to help me toss some bobbins! The video is pretty short and low-quality though – if you find something better – please send me a link in the comments below!

Eithni has step-by-step photos to make both spirals and stripes solo.

Less clear to me is the diagrams on  4-strand Whipcord Braiding which do however have a few more patterns using 1, 2, or 3 different coloured threads.

Jen on Genvieve.net has a lengthy document on how to make whip cord as well, though several of the images appear to be broken which might give more information.