After seeing the large tortoise (oval/ turtle) brooches from Viking Age finds, I was struck how distinctly different this brooch was, from the Saga Museum in Iceland. The character portrayed is supposed to be a Celtic woman taken as a slave/wife by a Nordic Viking Age man, and taken to Iceland. The brooch is much, much smaller than the other brooches displayed (either the originals as seen elsewhere, or the reproductions in the Saga Museum) an has a pattern, size, and shape that reminded me of a cockroach! (Hence, I’m calling it a “roach brooch” even if that’s not the most flattering name!

(I’ve discussed the style of this dress in another post, btw.)

However, when I was at the Vikings exhibit in Victoria, BC (a traveling exhibition from a Swedish museum) I did see brooches that were MUCH smaller than the ones I had become used to – and in asking one of the museum staff there, she said that there were really a variety of sizes, despite the fact that there were so many examples of the really large ones. 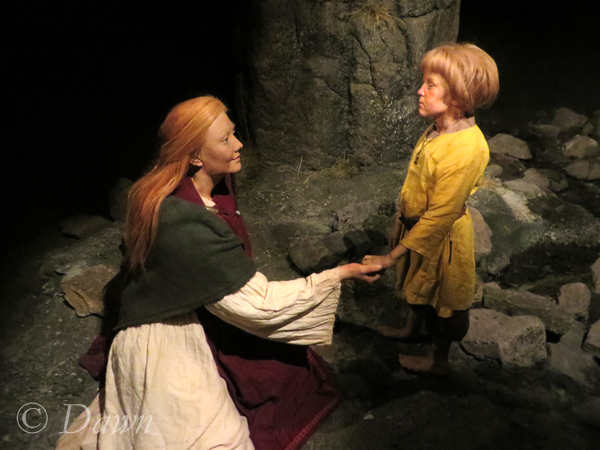 Mother and son figure at the Saga Museum

As an example of what I mean, here is a photo of the large tortoise brooches that I was more accustomed to:

2 comments on “Viking “roach” brooch at the Saga Museum”