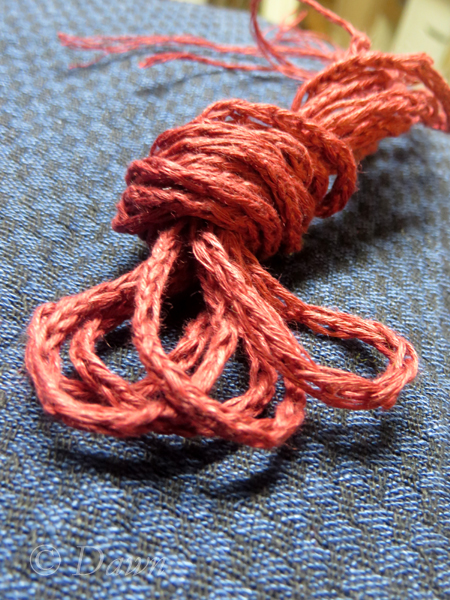 After trying my hand at making four-strand braid (aka Whipcord) I thought it would be interesting to try my hand at another cord-making technique.

Lucet cord is often attributed “as far back as the Viking age” – however in the bit of research I did online, it appears that there’s some disagreement if lucet cord was actually used in the Viking age. Unlike a lot of other braiding or cord-making techniques, it doesn’t require bobbins or pre-cut lengths of yarn – which means you can make a cord as long as you want – or rather, as long as your yarn is. (And as long as your patience runs too… LOL)

The Viking Answer lady says that as far as she’s aware, “we do not have archaeological evidence of actual lucet cord from the viking Age. There are artifacts from the Anglo-Scandinavian town of York, and another from Sweden, that some scholars identify as lucets, but this identification is not certain.” She includes a number of photos of the bone artifacts that look like lucets, including one being used to make lucet cord.

Cathy from Loose Threads has a photo of a close up picture of a fragment of cord “found in one of the Barshalder graves (in Gotland, Sweden) that many people believe to have been made with a lucet or an analogous device.” She compares the fragment with three different cord styles – a lucet cord, a 5-loop fingerloop braid, and an 8-strand plait.  She adds that “Visually, the lucet cord, 5-loop round fingerloop braid, and 8-strand plait all resemble each other.” However, she believes that the Barshalder find is more likely a 5-loop fingerloop braid.

Haldor Viking has an article about lucets and lucet cords – he looks at a few examples, and while some of them he suggests may or may not be lucets, another from Sweden, dated by other materials found around the lucet, to the late 11th Century. Similar in shape and size to other finds, this is made more significant by runes carved into the bone which may translate to “thread bone” or “twining bone”.  Similar items have been found in Sweden from the 7-13th Centuries, England from the 10-11th Centuries, Sweden – 11th Century, England 9-10th Century, etc…  Haldor also reviews the Gotland fragment in his article.

The Wayback Machine indexed an article entitled:The Tvinningsben or Lucet By: Sandy Sempel & Steven Lowe. September 2005. The article describes the Gotland find braid a bit better: “Among the rich textile finds from the grave are two braided cords. They are both square in section and roughly 3-4 mm and 1,5-2 mm across. The latter was found corroded to the needles in two of the four animal-head brooches in the grave. The author states that experiments show that a tool with two points a Tvinningsben gave a result close to the original cord.” The authors go on to add that the lucets “have also been found at Lund, Sigtuna, Löddeköpinge, Gotland and Falsterbohus as well as York”.

First off, I didn’t have a proper lucet.  I was thinking to myself “all I need is a two-pronged ‘fork'” and was trying to think of what to use… I ended up making something up using a rectangular eraser, two pencils with erasers on the end (not even the same length) and an elastic band. It worked just fine! 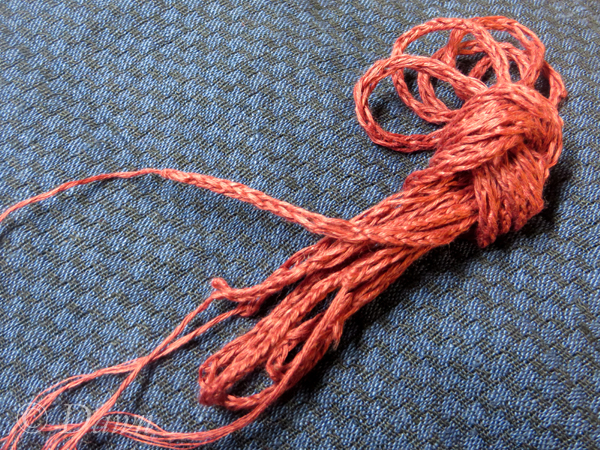 I started off with some linen yarn I picked up in Victoria. This is called Montoya Beach Solid, 100% linen, Colour 25 – rhubarb 306 yard/100 grams Made in Uruguay –Puntayarns.com

The first bits of cord were very loose, so I shortened the “tines” on my “fork” and it greatly improved the tightness of the cord.  I did find it hard to keep the tension consistent throughout the whole piece, though pinching, rolling, and stretching the cord tightened up the braid considerably.

For my second try, I lengthened the  “tines” on my “fork” again, and used Bernat Roving 80% acrylic 20% wool in Flint colourway 109 meters/120 yards / 100 grams. Made in Canada – Bernat.com I didn’t have to roll or pinch or pull the braid on this one at all, the cord seems consistant throughout – though perhaps the roving is just very forgiving! This super-chunky yarn also made up a lucet cord very quickly.

Now that I’ve had the chance to make up some lucet cord – well I’m not quite sure what to do with it! I’m not sure if I should use it on my Norse costumes – I suspect not… so perhaps I’ll find another use for it- like lacing on the next costume I’m working on – the 1480s Florence costume.