For a circa 1480 Florentine gown

sewing around the ring

As I’m working on my 1480s Italian costume, and waiting for my order of lacing rings to come… (waiting.. waiting…) I thought it might just be time to accept that I might need to give hand-sewn eyelets a try.

Frankly, I’m not looking forward to it, but it might be the only solution if the lacing rings don’t arrive in time, or just as bad, arrive in time but don’t actually work for what I want… I decided to do up a “sampler” of different ways of doing the eyelets to see which method I like best, how quick (or rather – slow!) the process is, and take it from there.

The truth is – making the holes with the awl is more effort than actually making the eyelets – the stitching is just time-consuming.

6 different eyelet options for my “sampler”

Plus I also installed a plain brass eyelet for comparison. (F)

I tried doing the awl through three layers of thin linen (the same linen I’m lining much of my garb with for the Italian project) and had a really, really hard time – I switched to just two layers for the sampler, though this concerned me a little bit, since the dress bodice I’ll be lacing has two layers of heavier linen, one layer of the same thin linen, and a layer of crisp, tightly woven silk….

Before testing out the eyelets, I really liked the look of the jump ring eyelet, the brass eyelet covered in thread, and the Pearl Cotton eyelet (though it wasn’t as symmetrical as the others…). The two thread-covered metal eyelets (the brass eyelet and the jump ring) had a nice consistent opening and fairly consistent exterior.

The plain thread version is very thin and skimpy-feeling; it feels like it would not survive long over a long day or evening of dancing. On the other hand, the DMC eyelet and the thread-covered brass eyelet are pretty “thick”. I suspect the brass eyelet might not fit through all my layers of my finished garment either which is a consideration; I might have to use my much larger grommets instead if I wanted to use this technique.

I did note that my stitching appeared to be more consistent and looks better (and got easier) as I did more of these. I suspect that if I wanted to do these on my finished garment (if those lacing rings don’t arrive in the post soon!) I should do one or two more as a sampler, before going to the dress itself, so that my motions will be more practiced and fluid. I’m still not a terribly enthusiastic hand-sewer when a perfectly good machine is nearby! (Now if only it had an eyelet stitch feature!) 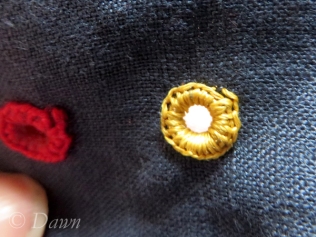 From there I laced up the sample around a squishy substitute, and let it sit to see what the strain might do to the eyelets.

The buttonhole twist and plain thread eyelets did distort in shape just a bit – not too much actually. The DMC one actually seemed to improve in shape with use! As expected, the eyelet covered in thread, along with the jump-ring eyelet didn’t distort at all.

With all things concerned, I think that the jump-ring version might work best – however I’m not entirely sure what they’re made of… and discolouration with use is a minor consideration. 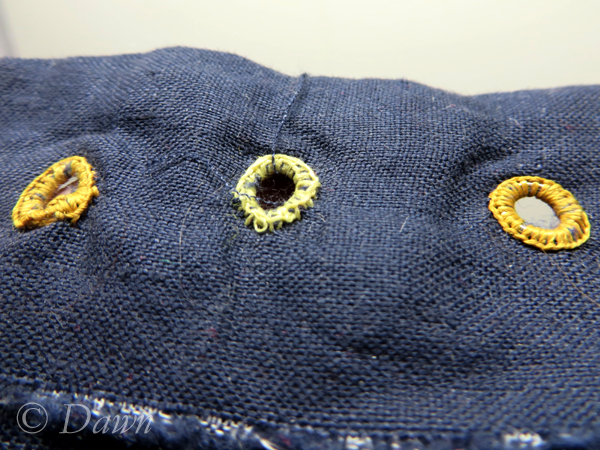 I may also consider doing a sample over my larger grommets. I’ve used these three-piece grommets successfully for long-wearing Victorian-styled corsets which are much tighter than this bodice will be, and have never experienced warping or pull-through. (Notably, I use a professional setter, and an awl-type device to make the hole rather than punching a hole wherever possible, though not exclusively.) I suspect once the boning is added to the opening, this will also strengthen the lacing, as every lace will have more equal distribution of strain.

There are a bunch of other costumers, sewers, and bloggers who have instructions on how to make hand-sewn eyelets, so I’m just going to give them some links in case any of my readers want to check out a little more detail to try their own.

There seems to be a fair amount of evidence for “embellished” eyelets in the time frame and location I’m looking at – 1480s Florence.  (My embellished eyelets I mean eyelets that are more than just thread, and rather have a metal component.) While there doesn’t seem to be any evidence for this time period using metal eyelets and covering them in thread, there are extant garments which have small metal rings, covered in thread like my jump-ring example. Anéa discusses one of these garments, with “lacing holes are hand bound over metal rings” on a silk damask doublet circa 1481.

Saint Mary by Carlo Crivelli, 1497. Click for the larger version, and look at the decorative lacing holes attached to the front of her gown

In Renaissance Dress in Italy 1400-1500 (Herald, 1981) the author writes about the metalworker’s art in clothing and costume in Italy from 1400-1500. She writes not only about the jewellery, but also the “more practical details of dress, such as the metal points (punte) at the ends of ribbons or laces, or the gilt maglie, which were eyelets for the openings of a garment.” In this statement, she references a statement where a man spent “1 lira 2 denari on maglie for a cotta for his wife”.

I wonder if simple jump rings would really require the work of a metalworker though – I’ve made them quite simply from wire. Of course this assumes that the general person would be able to purchase wire with which to make their own. Perhaps, maglie refers to something more impressive than simple jump rings, or the equivalent of the modern eyelet, and something more like an embellished decorative clasp-type of item, with a hole? (See the painting to the left.) Similar in function are the clasps/lacing holes in this painting of Marie-Madeleine by the same artist from 1487, or this painting by the same artist of Santa Lucia where the dress is laced fully closed, but it’s still clear that they are holes rather than hooks and eyes. Carlo Crivelli was from Venice, not Florence, and was born circa 1430, and died in 1495 which puts his work in the right time-frame, albeit not location. It’s worthy of mention that fashion in Venice was quite different than in other parts of Italy though.These kinds of lacing ‘rings’ are also visible in the painting of Saint Justina of Padua by Bartolomeo Montagna from Vincentine, dated circa 1490s however instead of shown on the front, they’re visible on the sleeves, and it LOOKS like they’re also on the bodice, attaching the sleeves to the dress. These rings though show two holes, rather than just one. The Palace Gallery recommends modern cloak clasps (I presume only using the eye, and not also the hook) to replicate the look of these objects. Of course, this speculation doesn’t help me at ALL if my goal is to justify the use of metal eyelets!

A SCA costumer, Caterina d’Alessandro Franceschi da Firenze &c., lent me her research and references a book I wasn’t able to read, Dressing Renaissance Florence: Families, Fortunes and Fine Clothing, by Carol Collier Frick where the notions required for a mid-fifteenth century giornea included 32 gold eyelets for lacing, though they’re not likely the same as modern eyelets. (Though if they were, that would be awesome….)

Another costumer writes in her paper “Women’s 1490s Italian Renaissance Ensemble Part 2: The Gamurra” that front, side, or false-front with side laced openings were  completed with lacing holes that were “finished by embroidering over lacing rings (closed brass rings)” giving further suggestion for my jump-ring example. ‘Baroness Briana Etain MacKorkhill’ adds in her paper that she prefers three-ply embroidery thread in a colour to match her gown, and laces her bodices closed with either lucet cord or kumihimo. I suspect for mine I’ll either use lucet cord, or perhaps a purchased cord, depending on my time frame as I approach my deadline.

In her Studiolo Peryn blog, another costumer references 16th Century Italian burial clothing and writes: “Lacing holes for the front opening are reinforced with a metal ring (evidence in 16th C Italian burial clothes suggest their use as reinforcement) and covered with cotton embroidery floss.” Though she does not give a reference for the statement, or where she found the information.

In addition to the websites referenced above, I also looked at the following books: