One of the things I find with costumes, to really make it work – its the accessories. The embellishments. The little things that take it from a dress that has a weird neckline or is laced up or has enormous sleeves, into something that really makes someone key in on what you were trying to accomplish.

To that end, the next thing on my wish-list for my Italian Renaissance costume was a purse or bag, to add to the little collection of accessories I was slowly putting together.

Plus.. where else am I going to carry my STUFF when I’m at an event?

(well, in all honesty I ended up bringing my mundane purse the first time I wore my costume, because I wasn’t staying in a room, and had too much to carry around with me.)

So.. let’s take a look at purses and bags!

In “Dressing the Italian Way” Anéa writes that the saccoccia – a loose pocket-bag worn outside or inside of a dress was worn in the second-half of the 16th Century during the Italian Renaissance. She writes: “It was reached through a slip in the skirt, often where the bodice laced up”. “It could be decorated with embroidery or with trims, and seems to have come in various shapes and colours, though the semi round shape seems to have been dominant. Noble women usually wore them under their dress or skirt, while working class women (or informal dressing in general) wore them over their skirt.”

In her featured blog post about the saccoccia, she indicates that the earliest pictorial evidence for the saccoccia is 1575, though she speculates that it could have been worn and used earlier, and just wasn’t illustrated.

Katerina also notes her 1575 and onward research showing these pocket bags – and shows a walk-through of how she made hers, to accommodate my similar problem – how do I carry all my things when I go to events?! Despite the later date than what I have in mind, she does say that the evidence shows that they were used in Florence.

Woman at her Toilet – Alessandro Allori, dated 1575-1578 From modehistorique.com

In contrast, Baroness Briana Etain MacKorkhill includes the saccoccia in her inventory of items for  her 1490’s Italian Renaissance ensemble which at least suggests that if I were to wear one – it wouldn’t necessarily seem out of place to other SCA participants.

Birth of the Virgin by Alessandro Allori, 1595 From Magda’s Salon

In making her own pocket-bag, the author of Magda’s Salon notes a “Spanish pocket dated 1575-1600 just within period at Museo del Traje or Museum of costume in Madrid.” which has a similar shape to the Italian saccoccia, just shorter and the example doesn’t include any remaining ties for the waist.

In the Hathaways of Haworth, the author notes that these pockets could be worn in pairs, or singles. She writes that pockets “were also a common gift from women to other women perhaps on birthdays ,weddings etc .” though it’s noteworthy that most of the examples she shows (that have dates) are from the 18th Century – though the style is the same as the 16th Century versions mentioned above. She speculates that this style might be as early as 1380 however – that’s a lot of time for one style!

The V & A museum’s article on pockets from the 17-19th Centuries mentions that some pockets “were made to match a petticoat or waistcoat. Some were made over from old clothes or textiles. Pockets could also be bought ‘ready made’. ” Pockets of History shows over 300 examples of various pockets from the 1700s and 1800s in this same style.

While I think that the saccoccia-style pocket-bag would be super simple to make and discreet to wear, I also really like these button-topped pouches – though making one will be a lot more challenging for sure!

1503 painting detail by an unknown artist

Mikkel Frederiksen discusses this as an early 16th Century lady’s purse, and uses an illustration of a woman from Nuremburg by Albrecht Dürer, dated 1500-1501, as well as a 1503 painting by an unknown artist.  He describes this purse as a pouch of “variable size and a strap to attach it to the belt. The pouch is drawn shut with a drawstring, and the flap is held down with a sort of ‘button’. Smaller pouchlets can also be attached to the main pouch.”

Another example can be show here, a detail from Heimsuchung Mariens, 1490-1500, Austria. In Bettinas-pages, the author describes this as “a black pouch purse with one pouchlet and a large (silk) tassel at the bottom. It’s lid and sides (next to the pouchlet) might be embroidered and/or adorned with pearls. It seems to me as if there are pearls at the tassel’s top as well. The pouch itself opens with one drawstring at either side, the pouchlet has only one drawstring with one pearl at the top and one at the lower end of the string. The (leather?) strip that attaches the pouch to the belt of the wearer is quite thin.” She made a similar version (with a few changes) and documented it in her blog – something that I’ll need to refer back to for sure should I decide to give this purse a try at some point.

Looking through Pinterest, there are also a lot of remaining metal purse frames, which are a LOT like modern kiss-clasp purse frames. (See my little tutorial using a totally modern kiss clasp here)

This one from the Metropolitan museum’s collection is French, dated to the 15th or 16th Century.

This hinged clasp purse is noted as being Northern European, late 15th Century. (Another really good look at different angles of this purse close up are available here)

Another hinged purse is here – though I don’t see the clasp part of this one – perhaps it broke off or I just can’t see it? It’s noted as being from Northern Italy in the 2nd half of the 16th Century.

Venetian purse from the end of the 16th Century, in silk with pearls – 13x8x6 cm.

Oh.. or  “lute-shaped purse” or “shaped like pair of scissors” or a purse “in the shape of a powder flask”.

There seem to be a few extant examples of these, with subtle variations in shape, but all very similar. I sort of got a good giggle out of them when I first saw them… but…

…after seeing Morgan Donner’s example… I WANT ONE!

The example above is embellished silk, and richly described in the Realm of Venus.

The ones below I only found linked to Morgan Donner’s site, and with a little hunting, I found their origins:

The green purse on the left is in the collection of the Rijks Museum in the Netherlands. I used Google Translate to read that it is a ‘green velvet drawstring’ purse ‘trimmed with gold thread on a box in the shape of a pair of scissors (phallus?)’ trimmed with ‘velvet and bullion with two metal eyelets’ and is dated after 1580. Wonderfully, they describe the materials used to create this purse as well. Translated: ‘velvet, leather, cardboard, gold thread, silk, metal’ and list the dimensions as 11cm x 7.5cm In further notes, they suggest that while the purse may have been made in the Netherlands, the materials are likely Italian. They have a wonderful description that explains that the shape like a “pair of scissors” doesn’t actually open, and that the drawstring pouch is very small – only large enough for a few coins.

Later in their notes, they identify where each of the materials is located in the object – awesome! They note that this purse is constructed as such:

They have a very high resolution photo on their site as well, which I THINK I can see that the drawstring eyelets are bound with thread, suggesting that the metal they mean is the loop on the top.

The red purse on the right is in the collection of the British Museum, and is described as “Purse; crimson velvet; in the shape of a powder flask, with stiffened centre padded with horsehair; a drawstring pouch on each side and silver braid round edge.” It’s tentatively dated to the 16th Century, and is 4.75″ long. Acquisition notes suggest that this purse was given by Henry VIII to “Anne Bullyne”. 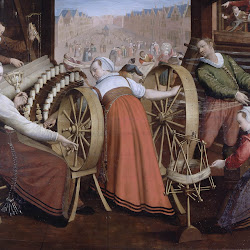 1594-96 painting from a museum in the Netherlands

Morgan Donner also shared a link to a painting where there are four women in the foreground, two of which have this purse hanging from their belts. Interestingly, the purses hang very close to the floor – I would make mine hang a bit higher up if I were to make one I think. The painting is “Het spinnen, het scheren van de ketting, en het weven” by Isaac Claesz. van Swanenburg, dated 1594-1596 showing Flemish spinners.

The Rijks Museum also notes other similarly-shaped purses that have been found in other areas of Europe.

Ceara Shionnach also made a lute-shaped purse, after looking at all of the same examples I did, including Morgan Donner’s re-creation. She noted that she modeled her version after “English/Italian/German/Netherlandish examples from the 16th century.”

As with a lot of my posts – this article started off with just a few items, with a few examples each… and has quickly expanded into several different styles – some of which are directly noteable for 1480s Florence, while others are speculative, or nearby in date/location. I’ll be splitting this post up into two to address each of them, without overwhelming my readers. (or myself!) Plus, this way I’ll be able to show off all the sooner, the bag that I did make to go with this costume!