After making my post about Viking Age names in Iceland from a museum exhibit, I started thinking about names for a persona while I play in the SCA. I started collecting a few ideas on that page, but then it all became very long and off-topic from the original post, so I’ve moved that information over here now…

I’m going to consider most of this a work-in-progress, as I’m sure to change things as I learn more.

END_OF_DOCUMENT_TOKEN_TO_BE_REPLACED

Norse man’s tunic and pants, with a pillbox-style hat

The Challenge:”April – War & Peace: the extremes of conflict and long periods of peacetime both influence what people wear. Make something that shows the effects of war, or of extended peace.”

My general starting point, is the Norse women who would have for a variety of reasons, worn typically “male” dress instead of typically “female” gendered clothing. Some of the women mentioned (in the Sagas) wore them while still being obviously female, while others wore them to ‘pass’ as men in battle. (That would be the “war” aspect to the challenge…)

The outfit is a pair of linen “Rus” style pants, a long linen tunic, and a wool pillbox hat lined in silk.

Fabric: 100% linen for the pants and tunic, wool (probably a wool-nylon blend) for the hat lined in 100% silk

How historically accurate is it? The pants and tunic would have been wool in period, but I made mine in linen for summertime comfort. The hat style is actually from a Greenland find a few hundred years later… but seems to be an accepted style so far. The original (likely) wasn’t lined, but I wanted to line mine for comfort. I still need to make (or buy) a set of leg wraps for my lower legs.

Hours to complete: No idea.. the pants took a while because I tried a different pattern twice before giving up and doing them this way. The tunic was pretty straight forward, and the hat went together quite easily.

First worn: Just for photos so far – I probably won’t wear the outfit until I complete the leg wraps; maybe June Coronation weekend if I need something to run around in?

Total cost: $30 (+/-) for the pants, about the same for the tunic. The fabric for the hat was recycled/stash.

Silver necklace from the Vikings in BC exhibit

END_OF_DOCUMENT_TOKEN_TO_BE_REPLACED

From the amulet display (top view)

Today’s post is a short one – about amulets on display at the Vikings in BC exhibit.

The round pendant above (and below, seen from the side) is made of bronze, and is decorated with a “mythological animal-shaped figure”. This amulet was from a grave find in Helvigsdal, Uppland.

END_OF_DOCUMENT_TOKEN_TO_BE_REPLACED

I have a very simple Viking Knit chain to show off today, made of 24 gauge silver-plated copper wire, drawn down to approximately 7 mm in diameter. It’s finished off with a hand-made silver-plated copper (18 gauge) ring closed with spiral-wrapped ends, and was made using the single-knit technique.

I’m donating it to the Avacal Online Auction with proceeds going towards the Kingdom travel and general fund. If you’re interested in bidding, click the link and check it out! (Along with all the other beautiful things made by members of the soon-to-be kingdom.) The specific link to my necklace is here: Trichinopoly Chain

It is 25 ” / 63.5 cm long, including the ring. I made it this length so that it would fit over large heads, but not hang TOO low. The length means it doesn’t need an additional (non-period) clasp. It can be shortened, if you unwrap/open the ring.

The dressform I’ve photographed the chain on is a child-size form, in the photo above I’m wearing the chain. (and photoshopped out my scar..) 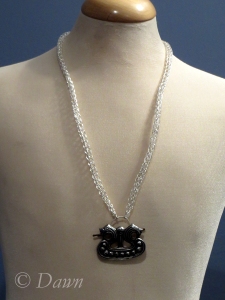 Chain shown with an example of a pendant (I’m not including the pendant mind you.. just an example…)

The photo above shows the chain with a pendant clipped on; I’m not offering up the pendant with the auction, it’s just for illustration purposes.