I’ve been thinking of a Tudor -era costume for a while, and like the 1480’s Italian… I’ve started with the headwear! (It’s probably note-worthy that my head is quite a bit bigger than my foam headform… so it looks a bit different on me.)

Although when I started the headwear, I didn’t have a dress designed, I have a number of fabrics I’ve collected for this project, and I imagine a very gothic style… the fabrics are silver/grey, black, blue, and red. Not surprising, these are the same colours I’ve based a lot of my costumes on so far…

When the Tudor Tailor had a bunch of their patterns on sale, I purchased the Hoods pattern (along with a few others). This was unfortunately RIGHT before they completely re-did their Hoods pattern, but I still like the original and wanted to make up a French Hood. (I think the Gabled hoods look neat, but the French Hood is so much more my style, and I think would look more attractive on me (and my wide face).

I cut the pattern pieces for the base and the crescent from two layers of millinery buckram, wired both with millinery wire (using buttonhole twist) and mulled both with thin cotton batting (I don’t have domet/domette, and in the past have used the batting successfully.

I raided my small silks boxes (doesn’t everyone have a stash of small pieces of silk? LOL) and pulled a crisp red (probably habotai in lue of taffeta) silk for the crescent, and a black silk satin for the base. I realize that the base should have probably been lined in linen, but the fit was so nice, that I figured I’d stick with the silk so that it would be kind to my hair (and so that the ends by my cheeks would look nice).

The pattern suggested that although it might be tempting to use fabric from the dress (which I hadn’t made yet!) that the colours for the hood should be limited to a fairly consistent palate to look correct. Luckily, the colours given as options worked within my gothic-feeling palate anyways! 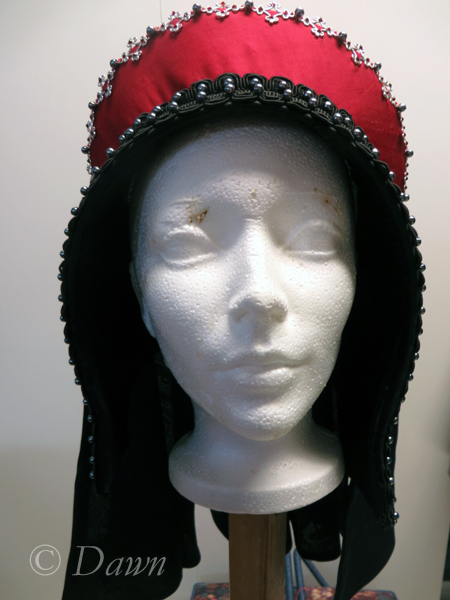 The pattern indicated the crescent should lay nearly flat on top of the base, and looking at portraits this seems accurate for some styles; however there were some styles where the crescent seemed raised, and this is the look I find more attractive and more common amongst costumers, so I opted to attach my red crescent so that it would sit “up” instead.

I glued very small “Crystal Passion” rhinestones in the colour ‘Dark Siam‘ (dark red) to small, silver-tone, diamond-shaped links, both from Fire Mountain Gems, using glue suitable for metal. Although much of the adornment shown in portraits use a gold-tone for the metals, I wanted the silver-tone to align with my own preference, as well as to add to the more ‘gothic’ look I had in mind.

Once the glue on the rhinestone-embellished links were dried to the touch, so I stitched them onto the top of the crescent, leaving the side of one diamond above the edge, catching the remaining three sides down with small, discreet stitches. Between each diamond I stitched another silver-grey pearl.

Next, I sewed a black braid to the edge of the base, as well as covering where the crescent attaches to the base. The black braid is a serpentine gimp braid (Online I found this Classic Scroll Gimp which appears the same) with a matte black narrow ribbon between the waves. Between each of the waves, I stitched a single silver-grey faux pearl. Most of the portraits I’ve seen have pearls – although white/ivory, not silver/grey, but the darker tone has a more gothic vibe in my eyes, and I had a few bags of them (in three sizes) set aside for a long time for a Tudor project.

In retrospect, I should have stitched the braid and pearls first, then the links and pearls, because the thread caught frequently on the little raised parts of the links during hand-sewing, but I wasn’t SURE about the billiments at first, so this worked out better, even if it was frustrating. 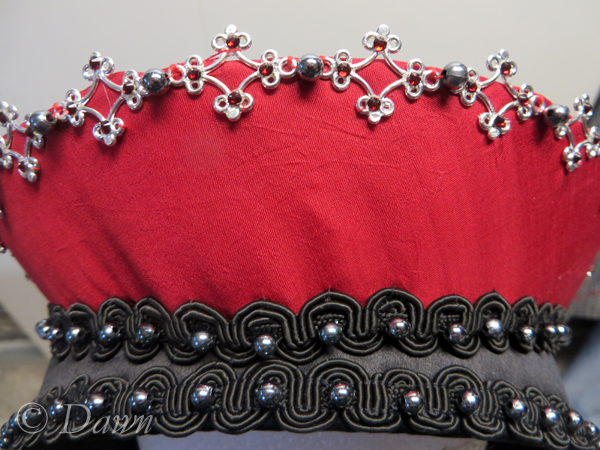 First French Hood, close up on the embellished crescent and top of base

The instructions suggested that I use a gold pleated fabric (a ribbon would work too) but that if I wore a cap under the hood I wouldn’t need it. I didn’t want to add in the gold tone, nor did I want to do it in (totally inaccurate) silver-tone organza. I opted not to do this part of the hood.

The instructions suggest using black silk satin, silk taffeta, or silk velvet for the veil. I had some silk satin that I used for the base of the hood, but only enough for a single layer, and I thought it would look better double layer (bagged) – which would also help me from doing a LOT of hand-stitching to hem a single layer…  Plus I didn’t want to use the same fabric for looks alone.

I opted to use a cotton-silk blend, doubled (and bagged). I like that it’s a slightly different tone of black from the base of the hood, and I like the lightness of it (as a single layer the fabric is semi-sheer) but in retrospect, the slits that the pattern indicates don’t seem necessary. Another variation from the pattern – the pattern says to sew the veil to the crescent, but it looked strange to me, so I looked at the Tudor Tailor book instead, which shows at least one variation with the veil sewn to the base at the back, so that’s what I did instead.

First French Hood, side view. This photo shows the difference between the base and the veil.

The style with the large and long base seems to place this style MUCH earlier than later French Hoods, if this Pinterest image is accurate (the link to the original source is broken… so *sigh*) Similar styles with the long, square sides are:

After this, I didn’t see (yet!) the long, square sides to the hood.

An informative link about the evolution and style elements to French Hoods at Elizabethan Costume.net. 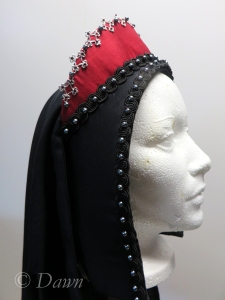 The Challenge: June – Out of Your Comfort Zone: “Create a garment from a time period you haven’t done before, or that uses a new skill or technique that you’ve never tried before.”

I’ve haven’t yet completed anything from the Tudor era, so the era itself is ‘out of my comfort zone’. I’m looking forward to the gown for sure, and like my Italian project, am inspired by the success of the hood, just needing a dress to go with it now!

How historically accurate is it?: I made a few concessions for style, but it’s fairly close to the Tudor Tailor pattern & recommendations.

Hours to complete: 4-6 for construction, 2-3 for embellishment? I did it over a few days while not feeling well, so I wasn’t exactly working at my most efficient.

First worn: Not yet – I still need a dress to go with it!

Total cost: All of the supplies I had in my stash already, however I’d estimate the fabric at 20-40$, and the notions/embellishments at about 30-50$.