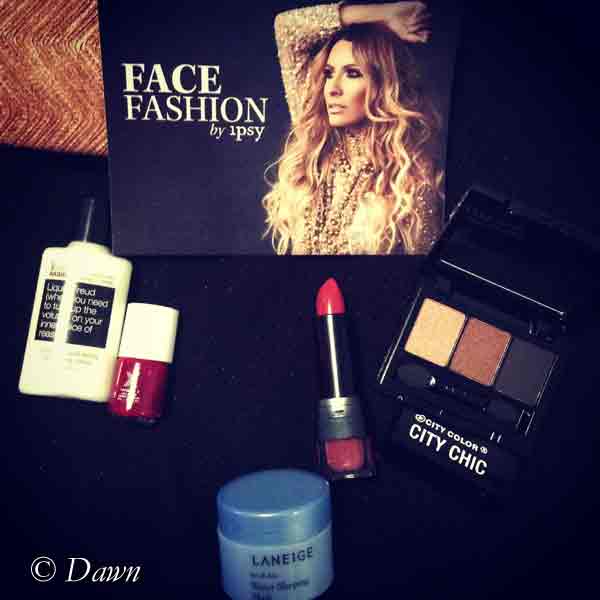 My September Glam Bag arrived on time, but as usual, I’ve been rather late to blog about it. It took a while to try out some of the goodies… to be able to give you the low-down on what I received.

Eh. Rather underwhelmed with this – I don’t wear lipstick normally (I usually go for glosses or balms instead) so I likely won’t use this much before it’s ready to toss out. The colour is ok – pretty neutral which is fine. I don’t really have anything bad to say about this (apart from finding the see-through bottom of the container kind of weird), but also don’t really have anything good to say about it.

I felt kind of neutral about this when I first got it – it’s really just a moisturiser as far as I can tell – but it seems to be an ok moisturiser (not deeply moisturising though) doesn’t have an offensive scent, and doesn’t seem to irritate my eyes or skin. The name is pretentious though, which is a bit of a turn-off. I wouldn’t buy it, but I’ll use up the little pot of product for sure.

This is possibly my LEAST favourite item in my glam bag- I LOVE the tiny nail polish, but the polish itself is terrible – it chipped on the second day I wore it, all three times I put on fresh coats. I even like the colour, but the formula is just not worth it. Even on my toes it chipped after a few days, and I can usually go over a week without needing to touch up my toenail colour.

This is probably my favourite item out of this glam bag – I’ve used it frequently since I got it, and it’s going to be great for travel too. The colours are dark enough and intense enough to be worthwhile, (well the middle and dark shades are, the lightest one is a bit too light for anything more than highlighting) and the colours themselves are good on my skin tone. I like this brand, and have bought their shadows before, so I was happy to get this one in my glam bag.

The lotion is another kind of underwhelming product. It smells ok, but not great. The moisturiser is fine, but not great. It’s not oily or greasy which is good, but it also doesn’t seem to be very moisturising…

I also redeemed Luxie Beauty Tapered Blending Eye Brush 205 for 500 points. Sept 2. and it should have arrived with my September glam bag… but it didn’t. It wasn’t until late September that I got an email saying it would be arriving in my October bag instead… 😦

Want to help me get MORE points for more freebies? Use this URL when you sign up for ipsy: https://www.ipsy.com/new?refer=1ledf  and I’ll get 250 points towards cool stuff. (It will take a while though – eyeliner is 1000 points!)