In my previous post, I mentioned classes I took at Festival of the Snow Eaters. While that event was in early October, a few weeks later I attended Fall Grand TUA in Regina. While there, there was a merchant with a gorgeous purpleheart whorl spindle…

After the feast, I found myself in possession of the spindle… and so at Arts & Science practice  the following Monday, I had to give it a “whirl” (teehee) – with some gorgeous purple 30% Alpaca, 70% Merino Top wool from New Zealand. 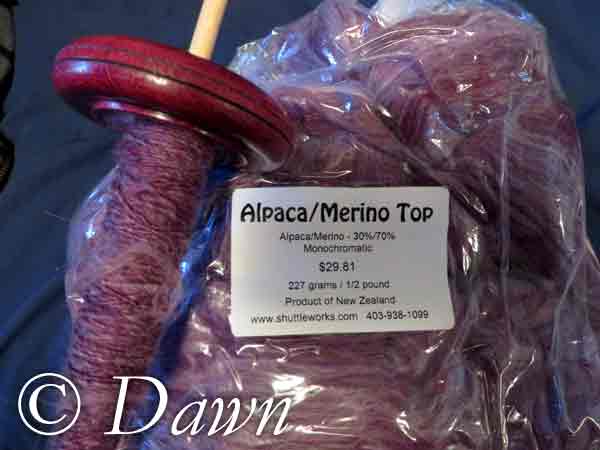 Spindle with the package of wool roving

You might not be able to tell, but the spindle doesn’t have a hook like the other ones I’ve used – instead it has a notch at either end to use as a top or bottom whorl spindle. Getting the hang of spinning without a hook was a new technique for me, and a bit tricky to start.

The wool spun up very nice – quite fine (much finer than my first attempts!) and very even (whoohoo!) which means when I do get enough spun up, I’m hoping it will make up into something much smoother and consistent than my first attempt too. I might try to ply it as well which will be another new technique.