I made this dress a while ago (quite a while ago!) but never got around to getting a photo of it until now!  I had been feeling like I wanted some new everyday clothing, so it felt really good to whip something fast and simple up.

While killing a little time on Pinterest, I really liked this dress: So I pulled out my drafting paper, drafted up a pattern, and then whipped it up in some black rib knit that I bought  from Fabrics.com.

I did make a few adjustments from the pattern  – slashes for armholes are super uncomfortable, so I rounded the armhole in the front, and then after trying it on, rounded them for the back too. I also dropped the neckline in the front from the suggested neckline. I made the dress 100cm long, which made for a slightly too-long dress on me IMO. I’m pondering doing it in a tunic length as well. Since it’s backless, I’m not really going to wear it as-is, but rather over jeans/leggings and a tank top/camisole so I think a tunic would be more useful than a dress.

I bound the raw edges with stretch PVC kind of fabric – the same strips of fabric I use for binding on  metal shirt re-makes.

For basically a ‘muslin’ (I always try to make my muslins out of wearable fabric, so if it works out I’ll have something cool to wear) I am really super happy with it. I’ll probably style it with a tight tank top and a pair of matching leggings when I wear it. 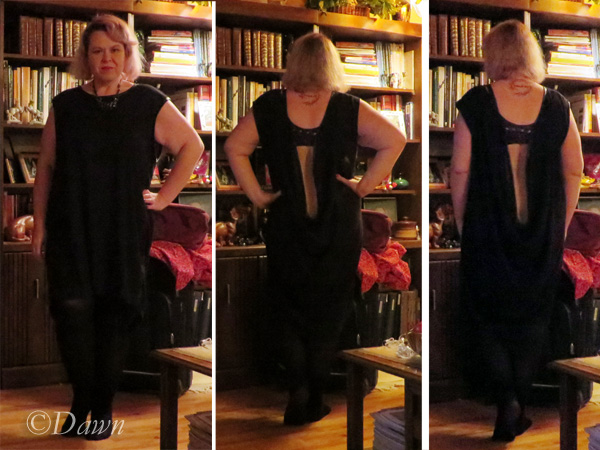 Shown here NOT with a tank – but just over hose and a bra, the strap of which is way too visible… (and I still need to start taking photos in daylight instead of night time for better lighting…)