In my previous post I showed off my very first cast pewter pendant. Today I’ll share the remaining three pendants I made for the project I’m working on.

These pendants were part of my “stretch goal” for my project, and I’m thrilled that with help from Craig (known in the SCA as Caiaphus) I was able to accomplish this!

Italian soapstone from Green’s. I bought two blocks made of this. (iPhone photo)

Although I was pretty scared about it, my teacher offered to let me pour the pewter. We bound the moulds together with elastic bands (since we didn’t do the alignment holes) but could have used clamps as well. Once the molten pewter was fluid, he taught me how to remove the impurities, and then I poured the pendants.

They all poured well, though I opted to make the dot designs in the diamond-shaped pendant more distinct, so went back to the mould one more time before re-pouring. The poured pewter can go right back into the crucible and be re-melted.

Craig (SCA name Caiaphus) also taught me that the dust from the carving and sawing can be used as slip in older moulds – but since these were fresh – and probably already dusty – I didn’t need to use that.

Taking the heart-shaped pendant out of the mould

The extant heart-shaped pendant has a very intricate design that I did not expect to be able to replicate with this method – I simply don’t have the skill or control yet to be able to carve soapstone with this degree of intricacy. I believe that I could have used non-period techniques to achieve a closer similarity, but using period techniques was important to me for this piece – more so than coming close to the finished look of the extant piece.

Once the pendant was out of the mould and cool, I was able to remove the sprue with clippers.

From there I used a small triangular file to smooth the edges. The area with the sprue required more work to make it smooth.

Making the hole for the bail in the heart-shaped pendant

Craig let me know that hot water was enough to anneal pewter to make it easier to work with, so since I had a bit of a tough time putting the hole in the triangle-shaped pendant, I put the heart-shaped pendant in hot water before using a nail to create the hole where I’d suspend the pendant.

The small hole in my anvil was a big benefit to making the hole in my pendants!

Finally I attached the bail to the pendant. This I’ll discuss in another post as well, since I used this technique on a number of different pendants. I used silver for the bail, and attached it with a purchased rivet. 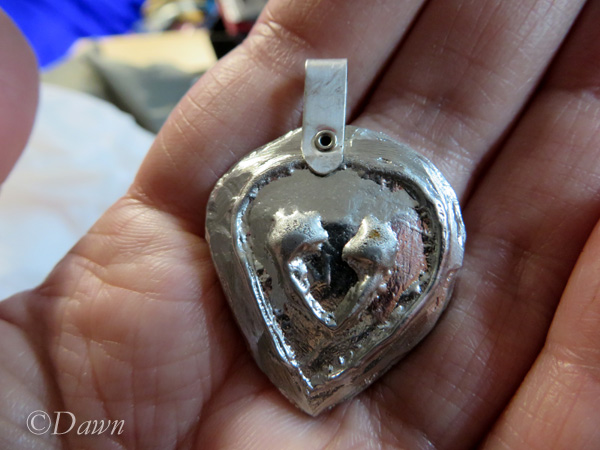 The lunula pendant was much more simple. The extant pendant has a moulded-on bail rather than one that was added to the pendant after the fact (like the triangle and heart-shaped pendants) so I carved the bail along with the lunula shape.

When the pendant came out of the mould, it too required finishing by removing the sprue, filing, and sanding.

Then I used hot water to anneal the pewter (discussed briefly above and pictured to the left) to soften it. This made it relatively easy to curl the bail to the back of the pendant so it can be suspended. I used a pair of pliers especially made to curl wire to do this smoothly.

Craig advised me that over-working the metal would make it harder to deal with, so I aimed to curl the bail in one step.

I originally thought that I’d be able to make the diamond-shaped pendant out of sheet silver instead of casting it in pewter. I purchased some sheet silver online, and cut out the general shape with clippers intended for metal.

However, unfortunately when I went to tap in the design, it really didn’t look right, so I skipped that, and opted to mould the pendant instead.

I followed the same steps I did for all of the other pendants, and on the first pour of pewter decided to make the dots a little more bold, so touched-up the mould, and poured a second time. I kept both pendants as an example.

Before and after – two slightly different diamond-shaped pendants right out of the mould.