A number of bags and things made for tournament prizes

In my previous post about tournament prizes, I mentioned that I’m hoping to help host some Arts & Science tournaments, challenges, and displays this year. (As the SCA Avacal Kingdom A&S champion.) I want to have prizes to give away for participants/winners, so I needed to build a little stock of prizes to give away. Friends said that they were worn out of requests for largess (gifts), and instead would be much happier with a little crafting ‘sweatshop’ instead, making a number of items, assembly line style.

We already made notebooks, and then on May 7, 2016 I invited people to come over to help once again with a new project. Unfortunately two people who had come up with ideas were unable to attend, so it defaulted to a purse/pouch/tote ‘assembly’.

Also unfortunately, only one other person came to sew (while another worked on his own project while chatting with us) so it wasn’t nearly as productive as the previous session.

A number of bags and things made for tournament prizes

While my friends were here, I used some of the green and black diamond-weave home decorating fabric to make two tote bags. Not a period option, but I bought some craft-related books at a book sale to give away as gifts, and all of the small bags are too small! I’ll need to make two more as well in future.

One friend brought a bunch of her fabric scraps from finished products, several of which were already sized to be made into small pouches too. I had made a few other small pouches, but the King and Queen had called for pouches themselves, so I had given mine away. With some brown heavy-weight linen I made two more, with drawstrings made from lucet cord I received in a largess bag myself.

From more of her scraps, I also made two hanging-book ‘bags’. These hold little notebooks I bought at the dollar store. The red linen one is bound with copper silk, while the rust linen (I think it’s linen?) is bound with the red linen. Like the brown linen bags, the ties on this are made of the same red lucet cord. I really like these, and will likely make more. 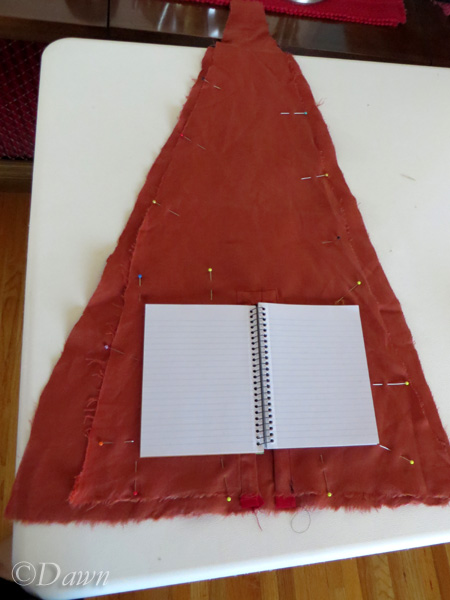 If you can think of anything else you’ve received in a largess bag that you really liked – or have other ideas of things we can make.. please let me know in the comments below!

Yep, there was a sneak-preview of this on my Instagram account.  Come follow me for more craft projects, costume sneak peaks, and event photos.. plus photos of my dogs, yummy sushi, and metal concerts of course! Also.. come follow me on Facebook!