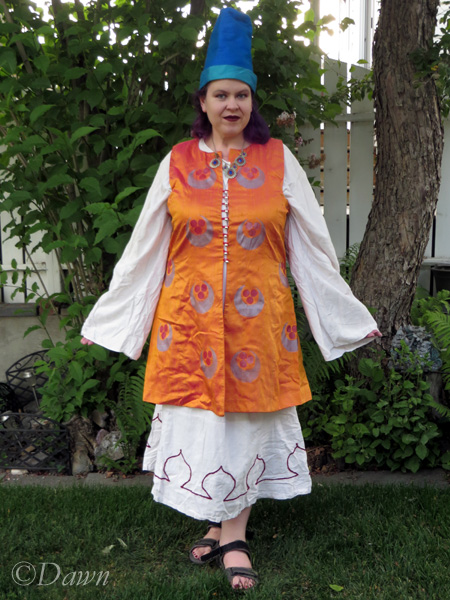 Since the majority of information I could find about Istanbul clothing from within the SCA time frame is 15th and 16th century, I decided to default and go that direction, starting with the Hirka, described from my overview as: 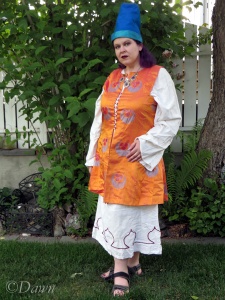 While my fabric choices should be smooth silks and linens (and wools) I decided to tap into my stash of dupioni silk because it’s something I already have, and will print well.

I had some BRIGHT pink-shot-orange silk that I started with for the Hirka, which I decided to do sleeveless since I didn’t have a lot of the silk.

I also decided to block print it….

I decided with this garment to make it up nearly finished, and then block-print it. For the Entari (which will come in another blog post) I cut out the fabric, printed, and then sewed it up.

The pattern is a variation on my regular ‘rectangular construction’ underdress/coat pattern. I wasn’t 100% sure if I should use this, or something different and more shaped… but Mistress Ari Usni has nearly this exact same pattern in her 15th – 16th century Turkish Clothing patterns document, as a Yelek (a which differs in description from my other research) so I felt comfortable going ahead – plus I knew it would fit well!

I got the vest mostly sewn together (minus the hem and armholes) so that I could print it, and lined it with some coral-coloured linen.  The silk I either bought at Fabricland during a 50% off sale, or at the Grandmother’s Fabric sale a few years ago. I wasn’t sure… The linen was from Fabricland during a sale at the end of the linen season… (Not a colour I’d normally wear, I had it marked “to dye” but it works well for this!)

Even after cutting out bias strips, there was still a fair amount of fabric left over – the rectangular cutting really does make excellent use of the fabric!

Sneak preview (sampler) of my project this weekend between other things. #blockPrinting #noFilter #theSilkIsReallyThatBright #youreGonnaSeeMeComingFromAKilometerAway going for an #Ottoman #costume for the #Avacal #SCA #June #Crown #RoyalProgress

I referenced photos of extant Ottoman fabrics, and chose the crescent with three circles for my motif. I carved the stamps/blocks from softoleum – a soft linoleum product meant for stamp-making.  The reference fabric has the crescent in threes with the three dots… but I opted to use them in a brick pattern instead, like another reference. (below)

Crescent with three dots above For the crescents I used a metallic red, metallic blue, and silver paint mixed with textile medium. For the dots I used metallic red, red, and brick red mixed with textile medium. I ended up touching up a lot of the prints with a paintbrush because the bold colour of the fabric was overwhelming the subtle block prints. I’m not sure if this was a matter of too much textile medium watering down the paint, the smooth block not holding a lot of paint, or just the large surface area making me expect a deeper colour than the more airy blocks I’d used before. 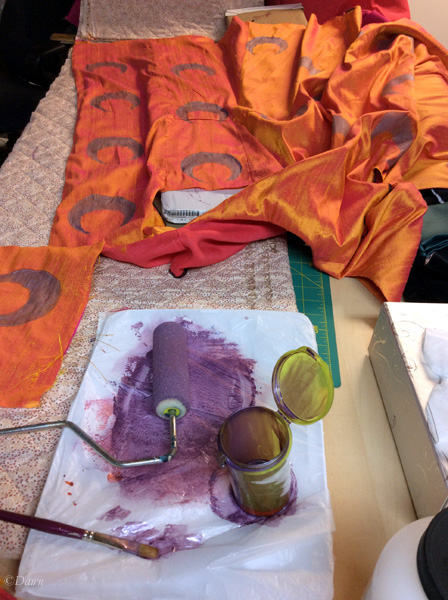 Once the paint had dried, I set it with an iron, and then moved on to finishing the armholes, first by pinning the lower areas in place, reversing it, sewing that seam, then doing the same on the rounds. It was pretty fussy, and I think if I were to do this again I’d do the arm holes differently. I also might have made the Hirka with short sleeves, if I knew how economic I could be with the pattern cutting. 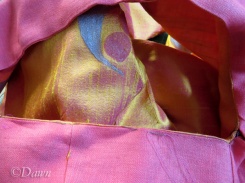 stitching the armhole closed by hand

Pinning the outer fabric to the lining at the hem. 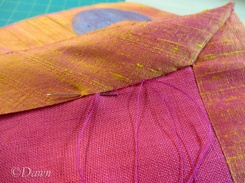 Slip-stitching the hem facing to the lining

Next I basted the hem together – I wanted to face the hem instead of bag it, so basting got the lining and outer fabric aligned, and from there I added the facing, cut on the bias from the outer fabric (so it will match the opening facings) and sewed it in place, hand finishing it on the inside.

Buttons coming along nicely on my #Ottoman vest #Hirka. Only a million more hand-stitches to go #groan #SCA #June #Crown

Next…. the buttons. I have these small pewter ball-buttons which are similar to those found in Europe 15-16th century, though I don’t know if they were found with Turkish garments or not.  They “feel” right, even if they aren’t. I sewed 10 of them on from neckline to waist, and then used red pearl cotton floss to make thread-loop closures using a single-thread braid (crochet looping).

The buttons are actually beads from Fire Mountain Gems – I hope that they stand up to wear! 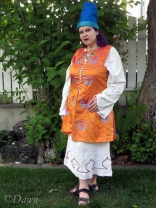 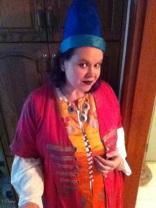 iPhone selfie in the completed outfit 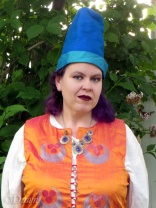 Complete Tarpus with the Hirka and my necklace 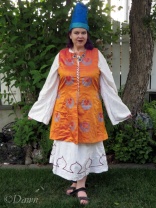 It’s done! Now on to the Entari! (coming in a post soon, follow the Ottoman category to see more once it’s posted.)