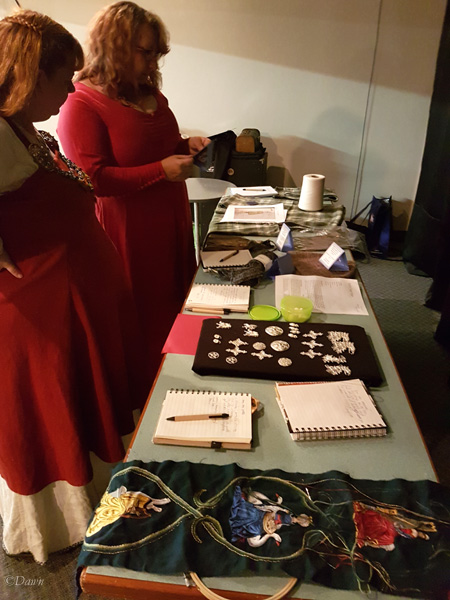 The first thing I did on the day was attend a spinning class. I had never used a spinning wheel before, and so really was excited to give it a try. It took a bit of work to get used to the pedal, but I think I got the general hang of things – though I’m sure my technique could use some polishing with more practice.

The instructor provided us with the wool batts, plus lots of samples of other wools to work with, so I went back and forth between a natural white wool batt and a natural light grey wool batt.

I mostly worked on an upright spinning wheel, but also tried the spinning wheel that flicks the wool off a little spike, which the instructor said was developed around the 1300s I think.

Thanks to Donna for teaching me how to #spin #wool on a spinning wheel today. This was my first time, and although I'm sure my technique could use some polishing…. I really enjoyed it! Thanks also to Björn for shooting a few seconds of video for me 🙂 #SCA #ThingsYouLearnInTheSCA #FibreArts #ArtsAndScience #spinning #spinningWheel #roving #handmade #DIY #yarn #yarnLove #artYarn #toughLifeOfAnAvacalChampion #Avacal #BitterEnd #HarvestFeast

In a few days I’ll have more photos from this 🙂

I was SO excited that we had so many people enter their works-in-progress into the unfinished projects display.

(Sorry if I’ve spelled anyone’s name incorrectly)
I think this is the most I’ve seen displayed in a long time – so I was really thrilled to see so many participants. Not just that – but I saw nearly every participant had a NUMBER of comments from other artisans who wanted to give feedback – either kudos on their work, or suggestions for future work or next steps.

I really hope that at the next competition/display/tournament, we get even more participants! 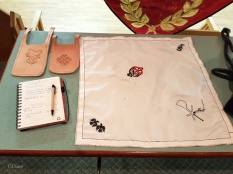 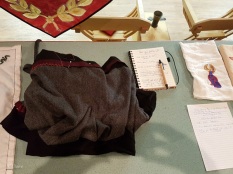 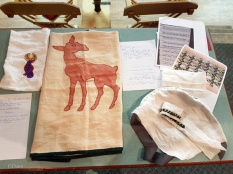 Applique and a cap work-in-progress by Sadb 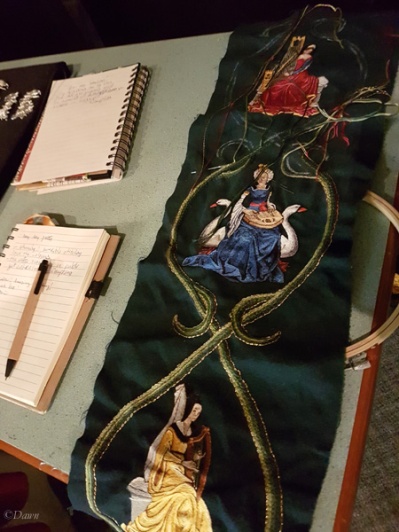 Prizes
There wasn’t a competition around this – the competition on the day was for the defender title… so instead I sent most of the participants (but not all, since I didn’t bring enough!) home with a decorated notebook that a number of us made for this purpose. 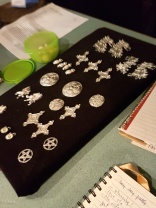 The second table of displays 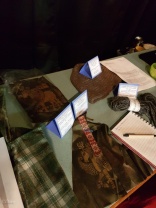 My own works-in-progress, block-printed silk, and a naalbound hat (shown with a completed hat) 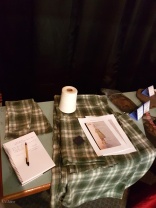 Work in progress jacket by Caterina

There were two competitors who entered the competition to become Bitter End’s next A&S defender – Amy and Caiaphus. Amy produced a “box of diversions” for youth – a box of games and toys for kids to play during feast when bored. Caiaphus did small beer along with complimentary culinary dishes. Caiaphus came out the winner, though Amy did an amazing job as well and I really hope to see her work again at future challenges too. (I also loved that she brought her notebook from SilverArrow to get comments and feedback!)

Prizes
Unfortunately I wasn’t able to stay for court at Harvest Feast, so I didn’t see my prizes given out – but I donated a little pouch of goodies for the winner (who will also get a number of regalia items to use for the year, and then pass along to his successor), and a set of books donated by a member of Montengarde (Calgary) who no longer plays to the runner-up.

Two projects for #SCA competition at #BitterEnd for the defender title for A&S … good luck to both & congratulations for entering!