Brian working hard making one of his items

Back in September I published a post about a class I was helping to organize (but not teach!) on Egyptian faience – an early glass product that sort of is the meeting place between clay and glass.

In early November, Li Xia (mundanely known as Alysa) came to Calgary from Regina to teach the class. I was hoping to quickly publish some photos along with the resulting completed beads…. but I just got so busy that I didn’t end up firing the beads (yet…). I’ll have another quick post once the beads are fired (and perhaps after I make something with them.

In the meantime I thought I’d share a few photos from the class.

Photos from today's Egyptian Faience class. Li Xia first showed us examples of her various experiments and studies; the different projects she has worked on and how she tested their results. Then we got to the Hands-On part, making our own beads , pendants , or small statues.  #SCA #SocietyForCreativeAnachronism #medieval #medievalReenactment #SCAdian #reenactorsOfInstagram #WIP #DIY #beads #beadmaking #mySCA #Egyptian #Montengarde #Avacal #Ancient #craft #crafts #clay #glass #pottery #jewelry These just need to be fired next #kilnNeeded #Calgary #YYC #kiln

The teacher started out getting our work spaces set up, taping down place mats for us to work on (to protect the tables from the dust that might occur), and then discussing how faience was ‘discovered’, how it evolved, and what it was used for.

She also taught us how she came up with her “recipe” for different colours, and how she worked with the different chemicals to make different results. She had a number of samples of beads as well as molded items for us to examine; a really well-prepared presentation of her work, her experiments, and why she chose what she did as “successful” given historical information and modern safety concerns. She also told us some of the safety precautions she wanted us to follow as we used the clay we’d be working with. 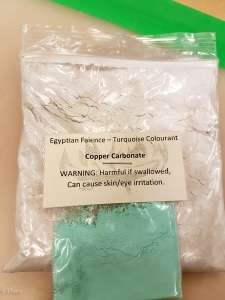 From there she had kits for each of us with a base plus colourant so we could make up our own beads or other items. She had a number of colours to chose from – to start with I chose turquoise, but then also we swapped clay with one another to play with different colours and blending them as well. (Which she indicated wouldn’t so much “blend” the colours, but rather result in sort of a speckled colour which I think will be interesting as well.

From there… we got to play! She showed us how to mix the clay safely in the bag by slowly adding water, then how to knead the clay until it was well mixed, and finally when the clay was safe (no more powder to become airborn) how to roll out balls of clay for beads (etc).

beads and molded/shaped items air-drying. The darker beads are fresher, and have not yet begun to air-dry.

I had also brought some molds from when I was doing my Anubis costume, and tried pressing the clay into the molds I had made as well. While the small scarab mold worked very well, the larger, more delicate Ankh mold did not work at all, though she suggested that I could try at home pressing the clay into the mold and then popping it in the freezer briefly to stiffen the clay slightly before removing it. While I did purchase two more kits from her, I haven’t yet had the opportunity to try that.

Our instructor also let us know where we could go locally to have our finished beads (and other items) fired, letting us know that flat-backed items would not go shiny on the back where they would lay on the kiln surface. I haven’t yet had the chance to go and get my items fired though; I’m hoping to get together with a few other students locally to share the cost of kiln time, and I also need to find the time to work with my other two kits first. 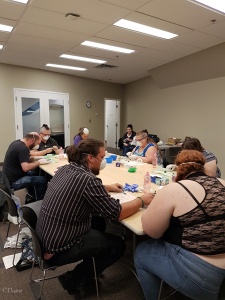 The Faience class hard at work.

From an organizational perspective, I didn’t recognise in advance that some of our classmates would be from other cities, and thus would have different access to a kiln for their beads. Likewise transporting them home was a challenge for some – I brought a tupperware bin to bring my beads home in, and a second which I lent out, but very few of the other classmates remembered to bring one. Something for me to remember for future classes that I might help with!

Visit Li Xia’s studio on Facebook to see more of her work! If you’re in southern Alberta, she will be back “soonish” in the new year to teach a class down in Lethbridge, and I’m hoping to bring her back to Calgary for another glass class as well! If you’re interested in that, check out the poll on the Montengarde A&S Facebook group and vote for the kind of glass class you’d be interested in learning from.