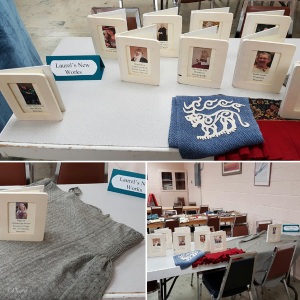 As you might know, I’m hosting a few SCA A&S (Arts & Science competitions) this year, and one of the questions/concerns I’ve heard from people is “Why should I enter?” (often followed by a silent: “…if I don’t think I can win?”)

I’m in NO way an expert on this… I’m still pretty new to the SCA, and haven’t travelled outside of Avacal to see how things are done elsewhere. Still, I’ve been to, judged, and competed in a few competitions, and have some suggestions and things to think about…and this is my soapbox! 😉

Yeah, It’s cool to win anything. Let’s get that out of the way right away. It’s cool to do your thing, have other people say your thing is awesome, and win an award or title or prize for how good you did your thing…

…but there’s more to it than that.

Chances are, you’ll enter a few contests and not win before you do. You’ll do your thing, all your friends will say your thing is awesome, and you’ll get all psyched up about your thing – only to find out that you’re competing up against someone who has been doing THEIR thing longer/better/in more depth/with greater resources than you do your thing.

So… why stick to it?

If you live in the Calgary area

If you live in either Montegarde or the incipient shire of Windwyrm, you are eligible to enter the A&S competition to become the baronial champion at Twelfth Night in January. More information about that here. There is also a separate medallion design challenge which does not come with a title.