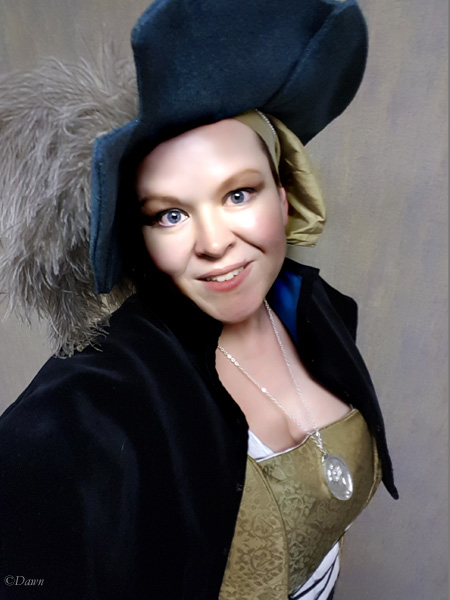 In mid-January the SCA barony I live in celebrated the step-up of a new Baron and Baroness, who have German personas. To recognize their elevation in a symbolic kind of way, several of us planned to add German elements to our existing costumes. As I wasn’t entirely sure if I could pull together a new German gown in time for the coronet, I decided to start with accessories. First the Gollar I already posted about, and next a new hat.

se of my time, but this style will work MUCH better with the kind of gown I hoped to make.

What the item is: German Renaissance split-brim hat

The Challenge: February: Re-Make, Re-Use, Re-Fashion – Sew something that pays homage to the historical idea of re-using, re-making and re-fashioning. Turn one thing into another. Re-fit or re-fashion an old gown into something you would wear again. Re-trim a hat for a new outfit, or re-shape a modern hat to be a historical hat. Re-purpose the fabric from an old garment (your own or a commercial one) into a new garment.

The main fabric for this hat is leftover from the second gollar I made, which itself was a re-use from gifted fabric from my former teacher. The lining for the hat is leftovers from another project as well. The feathers from the hat came out of a feather+flower bouquet I was given years ago. Not entirely re-making something, but definitely re-using.

This was finished in mid January, so I’m using it towards my entry into the Historical Sew Monthly February challenge.

Pattern: Self-drafted based off period portraits

How historically accurate is it? I’m pretty happy with the accuracy, based off paintings as no extant garments in this style exist that I’m aware of.

Hours to complete: The initial concept was over drinks & cake with the future baroness at another member’s birthday party, & the drafting and cutting out was done at an A&S practice (maybe 2 hours of puttering). Construction took an afternoon. Maybe 6 hours in total from draft to done?

Total cost: No new out-of-pocket costs. The wool would likely cost $30-40/meter, and would take under a meter. The silk would likely be $20-30/metre, and took less than half a meter (and is pieced). The ostrich feathers run about $3/each and I used 5. All of these were given to me. The buckram, thread, and bead caps were already in my stash; the buckram runs about $10/meter I think (it’s been a while since I bought it) and I used less than half a meter – it too came from leftover scraps. I wore this with the faux pearl-embellished gold silk Goldhaube I made last year to go with my blue Tellerbarret.

Since I approached this project while unemployed, my goal was to not spend money on any new materials. 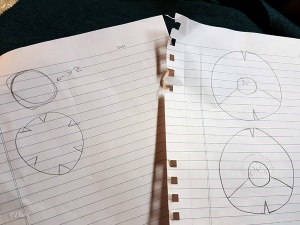 The future Baroness’ quick sketch (left) and my fast pattern sketch on the right.

I chatted with the future Baroness who has been doing German Renaissance since before I knew her about her ideas towards the split-brim hat over drinks and cake at a birthday party and A&S (Arts & Science) practice night. She sketched out her ideas of she has made this hat, with notches cut out of a large circle for the brim, but then looking at the portraits, I started coming up with a different idea.

Her design to me would lay very flat like the tellerbaret that I’ve made previously (or beret for a modern dressmaker hat) however the portraits to me gave me more sense of an upwards-bending brim, and I could see how the back parts of the split brim were folded over the front parts….

All of the above portraits are directly linked from Pinterest. Visit my Pinterest board with these and more on my 1500s German board.

I came up with a different design, with a front brim and a back brim, each with notches cut out at centre front and back (though worn askew) which when folded over would allow the brim to raise slightly in the front. There are portraits showing the the back of the hat – but from the front, where a notch is cut out – but no portraits that I could find that illustrated the TOP of the hat – so I decided to treat it similar to the top of the starfish hats I’ve seen, with a sort of round panel.

Of course, I also looked at other costumers to see how they addressed the style of the split-brim German Renaissance hat often shown in Cranach paintings.

Genoveva von Lubeck shares her pattern for her Split-brim hat on German Renaissance.net, which is made of four rectangles with points on the ends, divided over a gathered cap. Her finished version looks amazing, but I couldn’t visualize how her pattern would translate to looking like the paintings I was using as reference.  (And all of those feathers blur some of the details!) Her pattern would account for the cross-overs, but not the “bites” shown in my reference portraits.

Whilja of Whilja’s Corner focuses more on Landsknecht styles, but the (possibly?) split-brim hat featured on her page is illustrated tied on – which would give different options for construction as well. I didn’t see a lot of ties on the more formal portraits though, so I opted to not explore those styles.

Tece de Kaxtone has an entirely different take on the hat entirely. I think the finished project looks awesome, but the finished hat is very different than the portraits I was referring to. I also didn’t see how her design would handle the “bites” in the larger brimmed hats, so opted not to follow her pattern.

I also REALLY liked Vanessa Agnes Nessayem’s interpretation… it’s like a blend between Genoveva’s pattern with four sections, and mine with two. Hers has multiple sections like Genoveva’s, but are curved and have different sections for front and back like mine. I actually found her blog AFTER making mine… or I might have followed this pattern instead of making my own! Vanessa’s pattern doesn’t have the “bites” though…. which appeared in enough of my reference portraits for me to want to include. 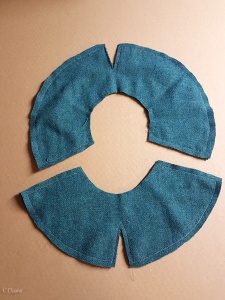 The fronts and backs of the split-brim hat sewn together.

I cut out the brim “front” and “back” out of two layers of the teal tweed, and sewed the outer edges together, and turned them right side out and pressed… a LOT.

I cut out the same pattern from buckram (with a bit of piecing because I was cutting this out of leftover scraps of buckram) and carefully inserted the buckram into the brims. If I re-make this hat, I’ll wire the edges I think, because I think that would have benefited the overall shaping of the hat.

From there I sewed the inner edge “closed” sewing from the ‘front’ to the ‘back’ thus basically sewing them into the circle. I ran two gathering stitches along the circumference of the top circle for the tip of the hat, and sewed it to the brim.

I had to piece the blue silk for the lining, then also ran a gathering stitch for the circumference, and sewed this at first by machine, and then finished it by hand (since the whole thing couldn’t be stitched by machine). 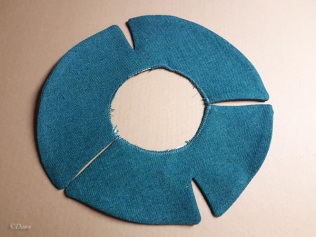 The constructed brim of the split-brim hat sewn into a circle. 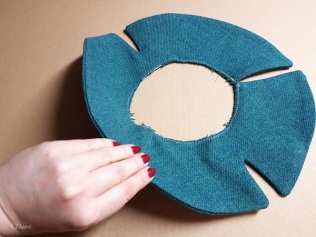 Overlapping the front and back of the split-brim hat to test the overall shaping. 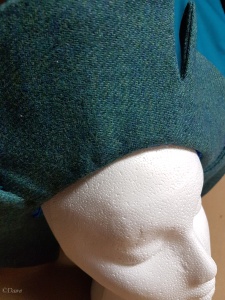 The edge of the split-brim hat turned in and pressed. Shown on a (too small) foam head.

None of the portraits show anything like a hat-band, and wearing the hat with the seam to the head lets the lining show… so I took the hat to the steam iron and with a tailors ham and lots of steam, shaped the wool (and inner buckram) so that the brim turns in.

I reinforced this steaming and shaping with hand-stitches done with matching silk thread. These stitches went through all of the layers except the lining to support the folded seam allowance of the inner edge. 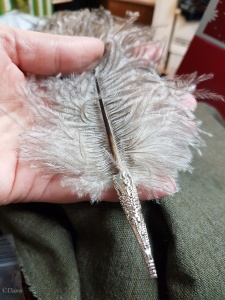 Gluing the ostrich feathers into the bead caps for the German Renaissance hat.

So many of the German Renaissance hats are trimmed with feathers – that reenactors around here interpret as ostrich feathers. While around here they all seem to wear bright feathers, all of the portraits I was referencing seemed to use white or grey feathers – which I happened to actually have a few of! The future baroness did put in a feather order, but unfortunately when this project began I was unemployed, and really couldn’t justify spending new money on this hat – even if teal feathers would have been awesome!

I played around a bit with how to organize the feathers on the hat, and finally settled with laying them all out overlapping on the front of the brim. In order to be able to sew them onto the fabric, I wanted to mount them into the bead caps.  I used hot-glue for this (for speed; regular glue would have worked fine too), and sewed the caps to the brim with coordinating silk thread once the glue had cooled.

(worn with my costume of course!) 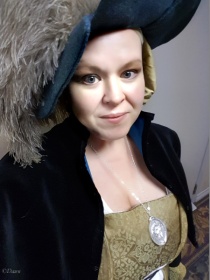 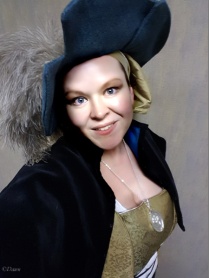 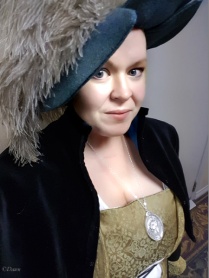 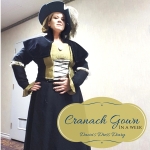 If you’re reading this post when it’s posted… hold on tight, I’ll have the next stage of my last-minute German Cranach Gown in a few days… In the meantime, come check out what I’m making next on my Instagram feed, or come follow me on Facebook, and you’ll get up-to-date posts about all of my new costume, sewing, and crafting projects.

I’d also invite you to come join me on Pinterest if you’d like to see more inspiration portraits and costumes!

If you’re reading this post well after the publication date, click the “Cranach Gown” tag to see all of the posts related to this gown, or the German Late period category to see all posts about late period German garb.