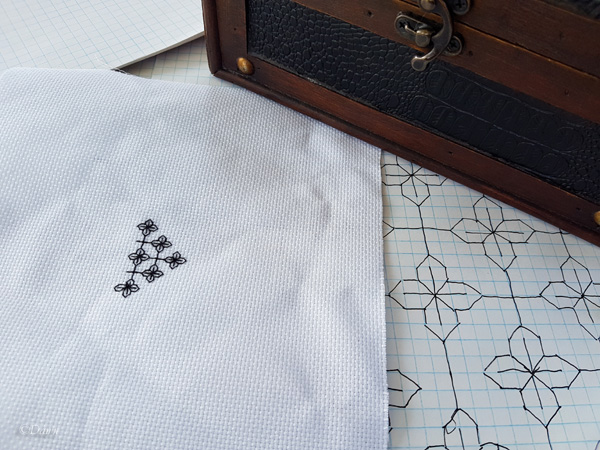 At Avacal’s September Crown, one of the classes I took was a beginner blackwork class with my Barony’s former Baroness (who also does super-beautiful embroidery!). I haven’t done blackwork before, partially because it looks so complicated, but also because I’ve always thought it was a bit later than any of my main costuming personas.

Our instructor definitely helped clear up that first thought though!

Next…. that fabric! We were given aida cloth (like for cross-stitch) and that fairly nice large grid… suddenly became a tiny little grid instead!

In the photo above you can see that I made a mistake on the bottom flower – but this was pretty easy to remove and fix.

At first we focused just on getting the design down – not paying attention to what the back of the cloth looked like. She let us know that this is a perfectly acceptable method for garments and items that won’t be seen from the back side – like enclosed cuffs, collars, and lined items.

Next she showed us the “Holbein” stitch which is totally reversible. It’s a lot more tricky, but on the last few elements of my design I gave it a try and it was a go! (As seen in the video below!)

Next of course… I’ll need to figure out what I want to DO with this little sampler – if anything at all. What do you think I should make with it? Let me know in the comments below.