In my previous post about my new (Pretty printed prancing period Persian ponies) Byzantine gown, I mentioned also making new accessories to wear with it – namely the collar (Superhumeral) and hanging panel.

Taking photos of the new green gown along with the accessories from my first  Byzantine costume with Mysticus Photography really illustrated to me that the blue and red accessories didn’t really work. The bright blue I had used before drew more attention, and took away from the beautiful printed ponies.

I went back to my research and  saw that most of the illustrations of these kinds of costumes had ‘golden’ collars and hanging pieces accented with gemstones/etc. I dug into my stash of fabric and pulled out the gold damask I’ve used over and over again for multiple other projects.

Painting gold damask with fabric paint to highlight the elements.

Looking at the illustrations of this style of costume, most of what I was seeing was mosaics – with golden collars with large gemstones. However, since these were mosaics, it’s not like it would be practical to have tiny little details. Even on other illustrations, there seemed to be fairly large motifs on the collars. I decided to highlight some of the pattern of the damask with some of the fabric paint I’d used on the dress (thinned down a little with the runnier textile medium to make it easier to paint with).

On the collar I also painted in the loops that connected these main motifs, though I didn’t repeat this on the hanging panel.

I knew that paint wasn’t going to be the only embellishment I’d do on the collar – so I’d also need to interline it to support the beading/etc that I’d do as well. The previous collar I made worked well to be quite structured, so I also wanted to interline it for structure.

I used red linen to interline the gold damask (and would later line the collar with the same red and gold striped silk that I used to trim the green gown). The red linen was left over from my red linen apron dress (hangerock).

From there I tried to figure out what embellishments would work well with the collar. On my previous collar I did contrasting panels of silk (like fabric), but I didn’t want to do this since the red silk I was using was striped… and I didn’t want to fussy-cut the silk to avoid the stripes…

I ‘auditioned’ a number of different embellishments to try to see what I liked.

Auditioning embellishments on the Byzantine collar

On the left is what I ultimately chose – small filigree brass stampings on the corners of each damask motif, and then an encased low-faceted orange/brown “gem” in the centre.

On the right I have a few of the other options I considered:

I should have sewn the ornaments on and then lined the collar… but I did the reverse – sewing a bag lining, and leaving one edge open to be able to open up to sew the ornaments on so the stitches wouldn’t show on the lining side.

I opted to only sew ornaments to the front of the collar, rather than the back as well – to keep them from being caught on my hair or veil. When the veil is worn, the back of the collar isn’t generally visible. 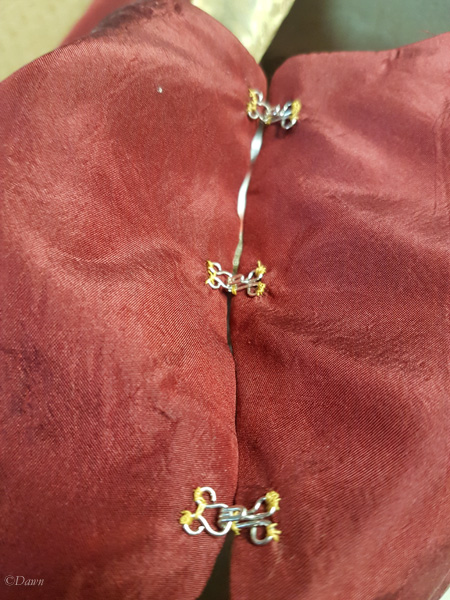 Hooks and eyes on one shoulder over the Byzantine collar

Once the rhinestone and filigree elements were sewn on, I slip-stitched the opening closed. I opted to add hooks and eyes to only one shoulder of the collar. On my previous collar I’d sewn hooks and eyes to both sides, but ended up finding this redundant.

I still knew I wanted an option other than always having to pull this on over my head – largely because of hair styling, make up, and even feeling like I didn’t want to take off my hat… 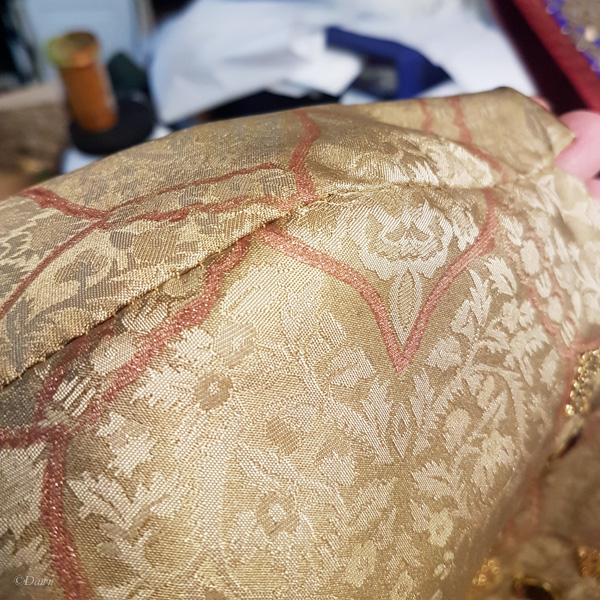 Hand-sewn shoulder of the Byzantine collar

The other side of the collar shoulder seam I sewed by hand. This has a nice shape which curves over my shoulders nicely, and stays in place while wearing.

I still haven’t found the NAME of the front panel. Some of the images I found (and indexed in Pinterest) appear to be clearly sewn down on the front, while others seem to be separate. I’ve decided to make it a separate accessory, for laundering, for interchangeability, to wear the gown as a more simple garment when desired, and for ease of construction to some aspect.

Like the collar, I started by painting the fabric, and then interlining the hanging panel with red linen. (No reason for it being red… only that I had the right weight of linen available, in an amount that was suitable, and it happened to be red.) I then sewed the lining on right sides together and bagged the lining, leaving the TOP open. Ultimately I probably should have sewed the embellishment first – doing it afterwards was a bit of a pain.

… But, I didn’t. So once the lining was on I sewed on the embellishments. 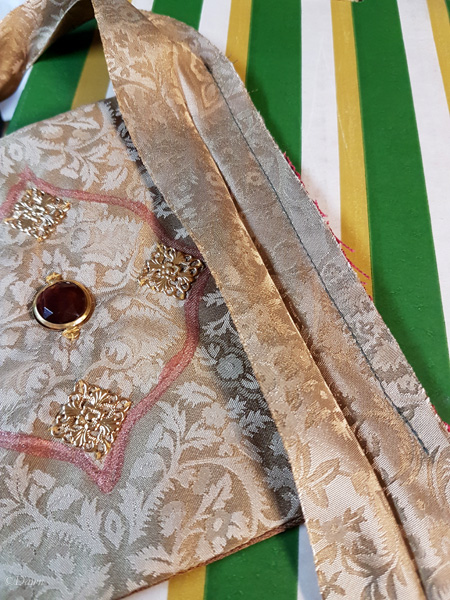 Stitching the hanging cord to the panel, right sides together.

Next I had some self fabric bias (this didn’t need to be bias, but I already had it cut leftover from another project) and I sewed the panel to the centre of it, then sewed the sides into tubes. I turned them, and then secured the other side of the bias strip on the wrong side of the panel. 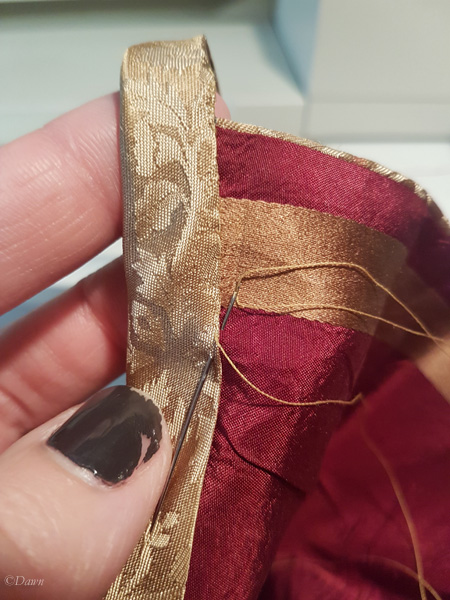 The hanging cord folded over and slip-stitched in place.

It all was pressed… and… DONE!

To finish the outfit I re-used the remaining elements from my previous outfit. I didn’t feel that there was too much blue on the hat, and the other garments were quite neutral. The remaining accessories included:

… and then when I wore this I didn’t wear an under-dress… but I could use any of my other simple under dresses. I didn’t wear it to Yule, but the Chlamys (cloak) I made previously would also work well with this outfit I think. 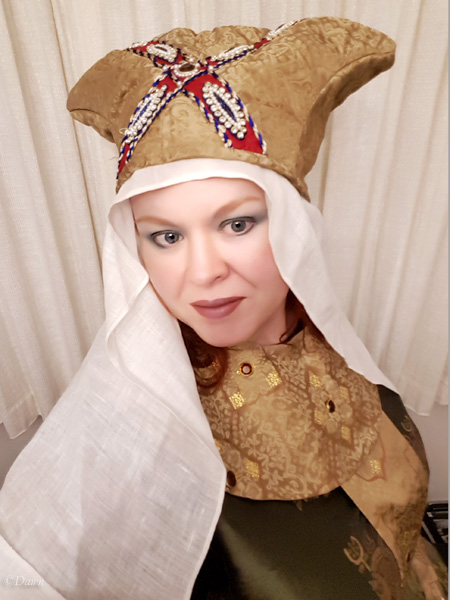 I think I’d still like to make a purple silk underdress, and add some (faux) pearls to the collar and hanging panel. If I found some larger gemstone elements, I’d also add them to the collar and panel as well.

I cross-post all of my blog posts to my Facebook page – so if you aren’t a WordPress user, or just don’t want to hit the “subscribe” button, you can follow me on Facebook and see when I load new content. Since I don’t blog daily, I also have a few links, videos, and photos that I load to Facebook as well.