About a year ago, I helped organize a class taught by Alysa from Fuzzy Lizard Studios on Egyptian Faience. In today’s post I’ll show off some of the results… 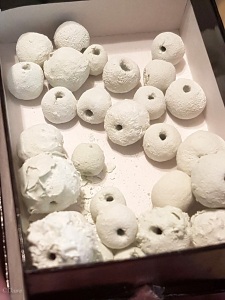 It took a while to get to this point. In the class I made a number of beads and other ornaments, with the plan to get together with other classmates in a few weeks later to have them fired at a local kiln that Alysa had researched for us. I also bought two additional packages of clay-powder to make more beads, but didn’t get right around to making it up into anything.

Then the kiln place went out of business… but no one was super anxious to use a kiln, so I didn’t worry about it too much…

Then Alysa contacted me to offer HER kiln, if we could get our things to her in Regina. One of the members of our SCA group was heading there for an event, so he generously offered to play courier.

Green Egyptian Faience beads after rolling, drying on a rack 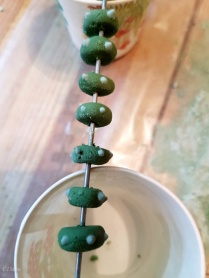 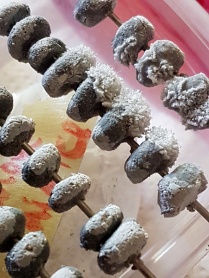 The dark grey clay grew a lot of crystals on these beads!

Unfortunately, a number of the beads crumbled into dust during transportation, but right before I headed up to Edmonton for the Christmas holidays, a member of the SCA who had gone to Regina, then headed home to Edmonton, but was coming down here for Christmas (how’s that for complicated?!) dropped them kindly off for me! 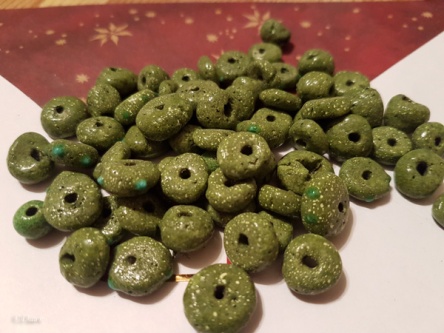 Turquoise Faience bead close up – look at the crackling

The results are very interesting – the green beads are speckled with white, and have a slightly rough texture – as do the dark blue/purple beads. The turquoise beads on the other hand are smooth as glass.

The turquoise dots I did on the green beads turned out as well, though the result is a little less bold than I’d hoped it would have been. Our instructor warned me that the backs of the pendants wouldn’t glaze… since they would have to sit on a surface to fire- and it was the exposure that would cause the silica to form the glass on the surface.

Stay tuned to see what I do with these beads… I already have some plans! You can come back to my blog…. OR follow me on Dawn’s Dress Diary on Facebook where I’ll cross post the posts from my blog – along with a few other goodies from my Instagram feed and articles I find online.

Alysa teaches classes around Western Canada (and sometimes central Canada and parts of the USA). Visit her website to learn more about what she does!