Goofing around in my Anubis mask with my new Egyptian costume

I started looking at Egyptian artifacts from the general time period I’m looking at… on Pinterest. I’m mostly trusting that the descriptions are fairly accurate -because admittedly I’m not doing any additional research at this point. 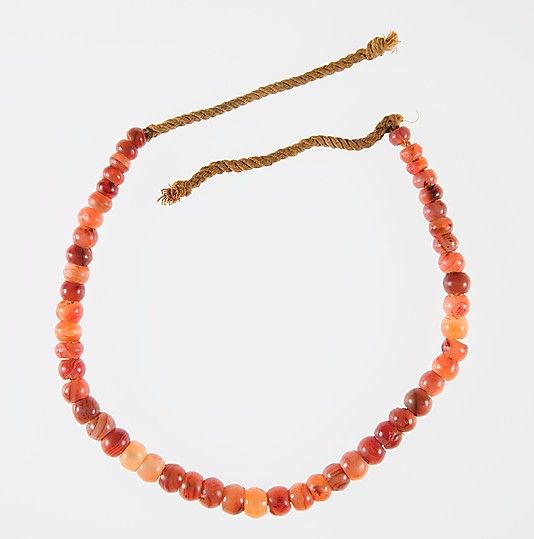 Direct link from Pinterest. See the original at The Met.

This Middle Kingdom necklace is all nearly-spherical round carnelian beads, strung on linen twine. It’s 45cm long in total.. though I’m not sure if that’s the total length including the tails, or just the length of the beaded section. Since this is from the grave of a little girl, I’m guessing the measurement includes the cords.

If the cords are approximately 2/7ths of the total length, this would mean the beaded section is approximately 32cm long. There are 50 beads, and they appear to be graduated from smaller near the ties to larger at the centre, though the graduation is pretty subtle. The average length of each bead is 0.6cm if the beaded section is 32cm long. (Averaged between the small and large.)

This New Kingdom necklace has electrum, feldspar, lapis lazuli & gold beads. The beads are oblong (like bone-beads) and round spherical, with a massive pendant at the focus.

This Early Kingdom necklace features tube/cylindrical beads made of lapis and gold with some gorgeous golden pendants.

This glazed soapstone necklace held at the MFA Boston also features round ball-shaped beads. I wanted to find documentation for non faceted round beads, since that is the shape easily found in semi-precious stones locally. I’ve found it challenging to source some of the more interesting historical shapes locally (and online too for that matter!)

Faience is a material I’ve seen in a number of artifacts as well, but when I wanted to start making this, the Egyptian Faience beads I made hadn’t yet come back from the kiln… and I wasn’t sure if Faience would mix with semi-precious stones…

This Late Period collar uses mostly Faience tube beads along with ‘seed’ beads, with arrowhead-shaped pendants and gold spacers. No semi-precious stones in this one…

This six strand beaded bracelet with scarab feature. This New Kingdom bracelet seems to be very symmetrical with a repeating pattern. The beads are “gold, lapis lazuli, cornelian (aka carnelian) and glazed composition”, and appear (in the small photo) to be long ovals (like bone-beads), short barrels, and small roundels/doughnuts. The widest part of all beads seem to be the same diameter as one another. Could the “Glazed Composition” be Faience? 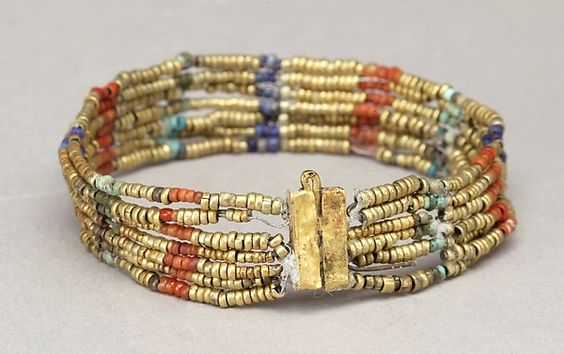 Direct link from Pinterest. See original at The Met

This beaded armlet from The Met is described as using semi-precious stones and Faience though… which is awesome to re-assure me of using the two together! The beads are similar to seed beads in shape, and are described as “Gold, carnelian, lapis lazuli, blue and green glass, faience on bronze or copper wire”. There is a distinct and even pattern of distribution, with each of the seven strands strung with approximately 8 gold beads, 4 carnelian beads, 8 gold beads, 4 faience beads, 8 gold bead, 4 lapis… and so on until the armlet is complete. It has three complete repetitions and the fourth is missing the lapis section.

This was really a super brief overview, but I noticed that there were a lot of necklaces with multiple strands and a central pendant that were not the “collar” style. While there were a number of different bead styles, the spherical beads I have found more easily in semi-precious stones locally would still be ok. Materials which appeared in multiple examples included gold, lapis, carnelian, and faience – including examples showing all together.

I’ve started making two new necklaces (one using those Egyptian Faience beads I showed off a few weeks ago) so in a future post I’ll have the results to show off too. You can subscribe to my blog, or follow me on Facebook for the posts as they’re published. You can also see more photos of some of my works-in-progress and finished products on my Instagram account.