Although I haven’t even started pleating the fabric for my linen Egyptian dress (based off the synthetic ‘practice’ one I did in 2017) I still wanted to make a more period-appropriate necklace to go with this outfit. Originally I wanted to blend the Faience beads I recently got back from a friend’s kiln with some lapis lazuli beads I bought locally, as as explored on New Egyptian necklace research, but ended up not liking the combination together, likely because of the shape/size of beads and the texture difference. (As discussed in Lapis Lazuli necklace.) 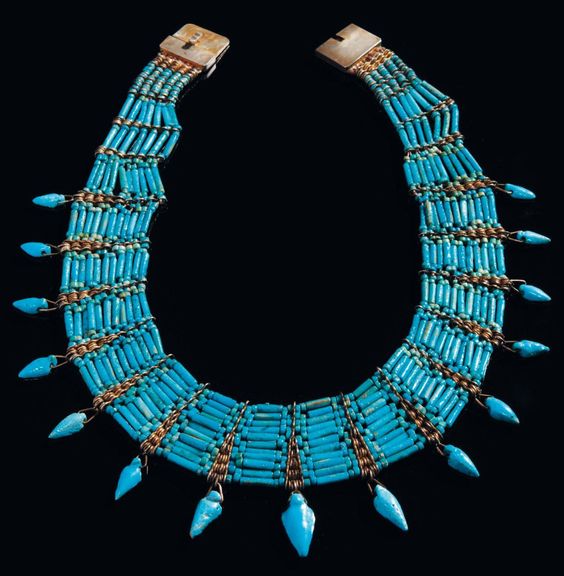 Stylistically, I found evidence supporting single-strand necklaces, collars, and multi-strand necklaces with and without central pendants. There was also evidence for faience-only necklaces, as well as faience used in combination with semi-precious stones and gold.

I bought some gold-tone spacer beads from The Bead Store Fashion Jewellery Outlet in Calgary, and divided up my faience beads into different categories. I set aside all of the doughnut-shaped beads I made, and then loosely ‘graded’ the turquoise and green round beads into sizes.

I started by just selecting the round beads and played around with a two-strand captured design – but there weren’t really enough beads to complete the design. (I did like the colour combination though!) I used an orange ‘waxed cotton’ cord, because I thought the larger-hole beads would sit nicer on a ‘soft’ cord than on beading wire. 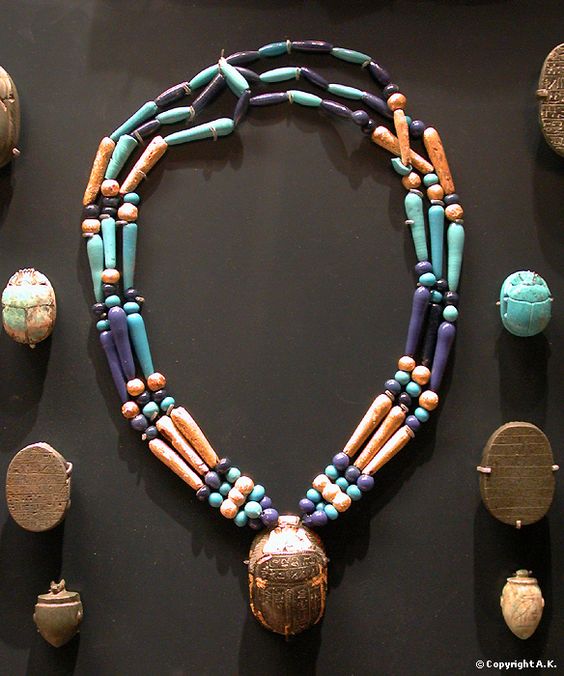 I came back and looked at my reference photos from my research post, and decided to take my inspiration from this three-colour, three strand necklace. I only had enough beads for a two-strand necklace, but I would be able to incorporate one of the scarab pendants I made, which made me happy.

The translated description from Pinterest is: “Heart Scarab Louvre: Anonymous Date: approx. between 1069 and 664 BC Materials: Stone Third Intermediate Period” however the origin website isn’t functional, and Google Reverse Search can’t find the image anywhere else…

I added the dark blue doughnut beads I made as well, and alternated each bead with the same gold-tone spacers that I used for my lapis lazuli necklace also made for my Egyptian costume. The top strand is slightly shorter than the lower strand, so it hangs properly, and lines up to suspend the pendant, which I wired up on a figure-8 style wire bail with a green faience bead.

On some of the other extant Egyptian necklaces I pinned, I noticed that multi-strand necklaces had back strands that were singles. (Example 1, example 2 (restrung)) so decided to concede to my lack of enough beads to do a full double-strand, by capping off the double strand mid-way, and doing a back strand of single beads. I used the same gold-tone cones, cord crimps, and then a simple modern lobster clasp which I can replace if I need to and can find a better alternative.