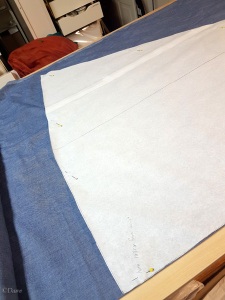 In my previous post, I shared my initial research towards creating a V-neck Burgundian gown. Guided by my research, I started by developing the pattern.

Toile number one – far too wide in the neckline, and gaping way too wide across my bust.

I took my existing modern bodice block, and adapted it to remove bust, waist, and shoulder darts. From there I created the V-neckline with the cut-on collar (kind of like a shawl collar) and added the flare from the waist to the hem, and drafted the back collar following the general shape and recommendations from The Medieval Tailor’s Assistant: Making Common Garments 1200-1500 .

After cutting it out of some scrap fabric, and trying it on – I remembered I should have flared it from the underarm for this earlier, less fitted version. I also found the neckline wasn’t nearly long enough, the neckline was too wide, and the dress was too tight in the armscye. I had made a 75 cm total hem width per panel (which would have been a 300 cm hem in total) which didn’t seem like anywhere near full enough either. 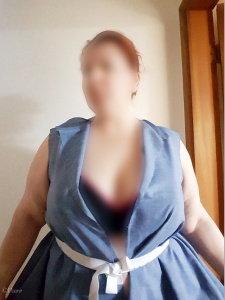 Toile number two – still too wide of a neckline, but far better

For my Version 2 draft, I looked at the Medieval Tailor’s Assistant chart, and estimated that their hem was about 4 times the width of the waist. I wasn’t going to have that much material, so I went from a 75 cm/panel hem to 120 cm/panel…. which means I won’t be able to cut the fabric on the fold (which is what I was able to do with 150 cm wide fabric for the version one toile). I dropped the neckline by about 8″, lowered the armhole by 1″, extended the side at the armhole by 1″, and did the flare from the underarm instead of the waist.  I didn’t cut this one out in full – only to just below the neckline angle.

With Version 2, the fit at the bust and underarm was much better, and I feel like the fullness will be more appropriate (though I might still baste the back seam to start and see if I want to put a gore in there) but the neckline is still too wide – it doesn’t “tuck” into my bustline – it gapes open…

So.. at this point I figured I’d either have to:
a) forego the dartless bodice and re-draft based on a bodice with a bust dart (there is limited support for bust darts for large busted women from slightly later period than this)

b) redraft without the cut-on ‘shawl’ collar, remake the neckline to accommodate my full bust, and do a separate collar. The majority of my research illustrated that a cut-on collar is the way to go… but I have to imagine that curvy women in period had to make adjustments for fashion…

Another option may be to make a super fitted, somewhat “squishing” kirtle to go under this gown, which would flatten my bust and reduce the difference between bust and waist… but that doesn’t appeal to me at all.

For the third toile, I did both A & B – sort of. I went back to my original bodice sloper (with bust darts and all) and moved the bust darts into the waist, and then released them entirely. I kept the back shoulder dart, which hopefully will be entirely covered by the back collar and thus be invisible when worn.

Third Burgundian toile, still not right but getting there.

I drew the V-neckline, but instead of doing a straight line from shoulder to below the waist, I drew an arc which gives more coverage to the bust. I also only drew the line to above the waist, but intended to leave the front opening to below the waist as version 2 suggested. I didn’t draft the separate collar at this point… but that was the plan.

Ok.. so there were STILL problems with the third toile, but I thought all of them could be solved. The neckline needed re-shaping, and adding another 1″ to the centre front at the bust. I also added two darts at the bust to take in the neckline. This is totally NOT period… (Or at least there is no visual evidence for it) but frankly… the FIT of this is more important to me – and my fingers are crossed that the collar will cover the darts, like the collar in the back.

Stay tuned… next week I’ll post the construction of the gown with the alterations to the third toile.