When I took a class at the SCA Twelfth Night event on nålbinding, I asked the instructor about the spiral design I’ve seen by a few other textile artists. While the instructor didn’t have advice, since she hasn’t used that design yet, I was still inspired to give it a whirl myself all the same.

I started with Lamb’s Pride Bulky 85% wool 15% mohair in Indigo. I bought a LOT of this type of yarn in various colours when a fiber arts store was going out of business, but tried to stick with colours that a) I liked and b) I thought could be reasonably accomplished using Viking Age (or at least medieval) dyestuffs. I decided to do this in Oslo stitch, so started off with enough to go around my head “plus a little extra” (about an extra inch) and then did the second row in the blue as well. 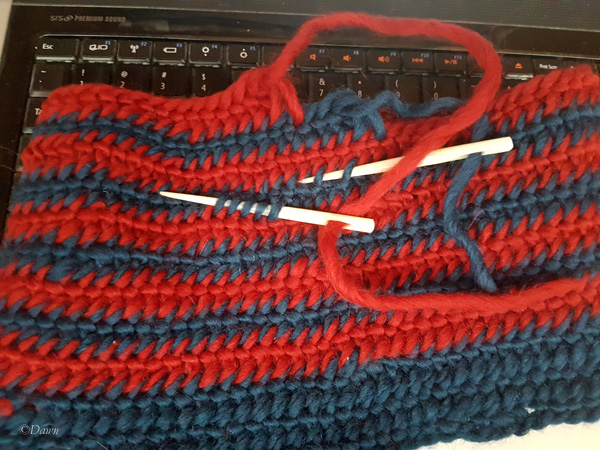 Working on two colours in a naalbound spiral

I’ve found that going from the first row to the second seems to take up a small percentage of the length of my hat – so I always put in a little extra. If it’s too much I can always full the garment to shrink it up a little… but if it’s too small it’s tough to stretch it out.

When I had two rows, I added in Lamb’s Pride Bulky 85% wool 15% mohair in Spice. It’s a lovely rich red. (And… as I found out while rinsing the garment upon completion, not totally colourfast…) To add the additional colour in, I wove the tail into the existing stitches backwards, and then basically ‘cast on’ the yarn directly onto the existing stitches.

New nålbinding project! I have been wanting to try the two color spiral for a while now… And so when I didn't use the full skein of the #indigo blue Lambs Pride bulky #yarn, for my previous project, I decided to grab some red as well, and try a project using the Oslo Stitch. I really love how the stitch pattern becomes so distinctive in two colors. . ✂📏🎨📏✂ #naalbinding #ArtsAndScience #SCA #medievalReenactment #VikingReenactment #handmade #CalgaryBlogger #Viking #vikings #Dawnsdressdiary #mySCA #artisan #SocietyForCreativeAnachronism #reenactorsOfInstagram #reenactorLife #OsloStitch #vikingCraft #norse #NorseReenactment #VikingCostume #costume #LARP #nälbinding

From there I worked each row alternating back and forth between red and blue, building the spiral up. I think it’s neat to see how many rows are actually needed to create a hat.

As I approached the area of the hat where I wanted to reduce the width, I did five single stitches, then picked up two stitches for the sixth stitch, and repeated. I did this with both the red and the blue.

When I got closer to the top of the hat, I did three single stitches and then picked up two stitches for the fourth stitch and repeated. When I got to the very tip of the hat, every stitch was a double, and there was a point where I was doing only two or three stitches before switching colours again. It was actually really gratifying to watch the spiral finish at the top of the hat. 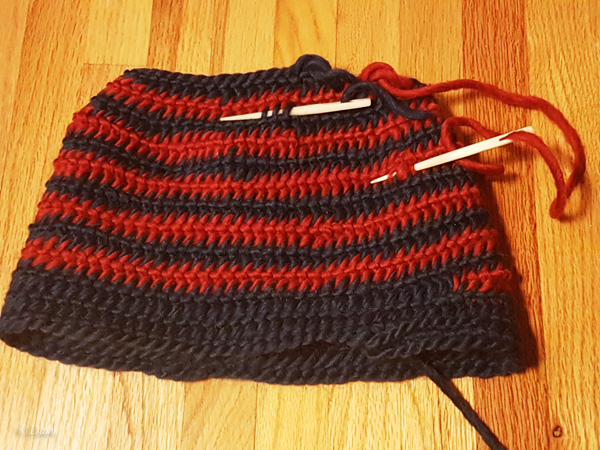 reducing stitches nearing the top of the hat. This is the point when I did the second reduction stage.

I finished the very top by weaving back in the tails into the existing stitches. Then I returned to the bottom, and added extra yarn to the remaining tail, and continued a few more stitches at the bottom, making them very narrow to taper the start into the rest of the hat. 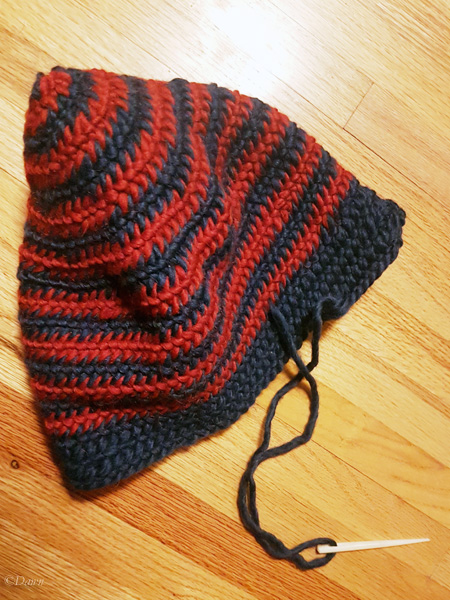 After that I washed and blocked the hat! 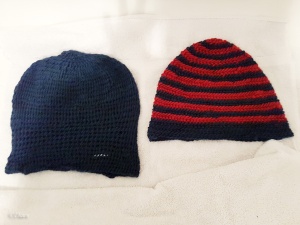 … along with another one- a blue hat done in York stitch. 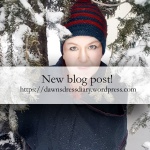 I cross-post all of my blog posts to my Facebook page – so if you aren’t a WordPress user, or just don’t want to hit the “subscribe” button, you can follow me on Facebook and see when I load new content. Since I don’t blog daily, I also have a few links, videos, and photos that I load to Facebook as well.

In the photos shown here, I’m wearing the hat with my black and white wool Viking-inspired coat trimmed with blue silk, my dark green wool serk (dress) and the Midgaard-inspired steel-blue/grey wool hood. Click the links to read more about each of these garments!