After I made the truncated hennin for Kadie in 2016, I really liked the way it fit (on my foam head.. not my head -her head is smaller than mine!) so wanted to make one for myself.

Finished outfit in the style of the Woodville portrait

The hat is based on a number of portraits of “the White Queen” Elizabeth Woodville. It’s basically a truncated hennin, but instead of sitting on a seperate band with a loop, the “loop” is built into the hat itself.

The loop curves in just slightly, cupping the forehead, and in my experiments with the hat I made for Kadie showed that the built-in loop helped keep the hat on the head nicely. The loop helps without pins or clips, if the head moved forward, backward, or side to side.

I didn’t do any new research for this hat… I knew from my research “Dating, placing, & dressing the horned hennin” that I would be able to wear this hat style with a Houppelande, a Cotehardie, or a V-neck Burgundian gown. I’d need more research to confirm if I could wear it with a sideless surcote or not. I also knew that the hats didn’t match any part of the rest of the outfit, so I could make it in any fabric I liked – and in fact picked the fabric of one of my sideless surcotes.

I drafted the pattern in the class I taught at Borealis Yule 2017. I referred to my previous research as well as the portraits I was referencing. For those who took the class… I’m sharing fairly detailed notes on construction – if you haven’t already made your hennin – feel free to follow along (keeping in mind that your version will not have the forehead loop, and you’ll need to make this on a headband separately).

Keep in mind that this is just MY way of constructing a hennin – please feel free to do your own research on materials and construction methods.

I start by taping my pattern onto buckram. This buckram was purchased at Fabricland, and is not water-shapeable.

I trace the pattern on with pencil – leaving enough space for a seam allowance where necessary. For this hennin, I add seam allowance to the centre back of the sides of the hennin, (side band), and around the circumference of the tip (crown).

I don’t add seam allowance to the top and bottom of the side band. These are the two edges that will be wired. Wiring adds structure and stability, as well this allows me to gently curve the loop on this hat on the curve of my forehead.

Since the loop at the centre front will face slightly more possible ‘abuse’ (since it sticks out) than the rest of the hat, I reinforced it by sewing on additional strips of leftover buckram. There’s no distinct shape to this – I just grabbed scraps that were long enough for the height of the band, and zig-zag stitched them on by machine.

Sewing the back seam of a truncated hennin with sewing machine

If you wanted a more historically-plausible technique, you could sew this by hand. Since I am using buckram in lue of stiffened canvas, you could also glue this on theoretically…  (though I find glue might gum up needles… and there is going to be a LOT of hand-sewing going on here….)

Again I use the machine stitching, which could be substituted for hand-stitching. I overlap the seam allowance rather than sewing it right-side-together, to reduce bulk and maintain the integrity of the hat.

My next machine stitching is applying the wire to the upper edge. This lower edge is a simple straight line, so I feel ok sewing it by machine. If you opt for this – be super careful that you don’t hit the wire with your needle…. it will break – and possibly mess up the alignment of your machine. eep!

Just a note… you can also opt to wire the inner circle of the tip of the hat instead of the top edge of the band… but I find this MUCH easier. 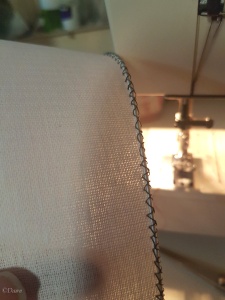 I use thread-wrapped millinery wire for all of my hats. When I sew it on, the thread I’m using for sewing seems to “grip” the wire better to keep it in place. I’ve seen lots of people use other kinds of more available wire however – make sure whatever you use won’t rust or stain your final fabric if it gets wet.

(Since this isn’t wet-shapeable buckram… yes.. you can get this hat wet – though obviously it’s not “washable” in any real way…)

In this photo I show the wire stitched onto the top edge of the band by machine. 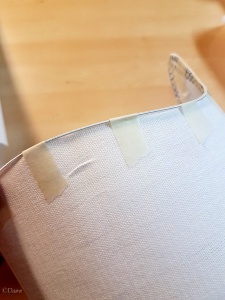 For the lower edge of the band, the more complicated shape – and the fact that the top edge has already been wired, making it more challenging to get through the sewing machine – means I’ll wire this edge by hand.

I tear off small strips of masking tape to “pin” the wire to the very edge, and then sew it on by hand using buttonhole twist. You can read more about how to wire for millinery here.

clipping and folding the tip of the truncated hennin

The next step for the buckram is to clip into the seam allowance only of the tip/crown of the hat.

The clipping lets me fold over the tabs, making this a lot easier to sew onto the band.

Hand sewing on the tip of the truncated hennin

The tip of the hat is sewn on by hand – this is somewhat challenging with only two hands…. a third hand would work well here. I just use a running stitch around the circumference of the hat.

If you’ve measured poorly when drafting the tip of the hat…. this will be tricky- the tip needs to fit perfectly – at this point there’s not really any wiggle room.

The padding I use in place of dommet to pad hats.

Padding the hat will soften the edges a little, and make the stitching and seam allowances pretty much invisible, even under thin outer fabric.

For Tudor-era hats this padding is called “dommet” though I don’t know of the term for this era.

Normally I use cotton quilt batting, though if you wanted to be more accurate a wool batting/felt would be better. Here I’ve used a 50/50 poly-cotton blend, because it was given to me by a friend, and is pretty much exactly the amount I need for my hat. I did have to do a tiny bit of piecing, but it’s not noticeable when the seams are butted.

The padding for the truncated hennin

I start by wrapping the hat with the band of padding, and sew the back seam with a butted seam (whip-stitch) I also loosely stitch the lower edge with a long running stitch to keep it in place. Then I add the tip of the hat padding, and whip stitch the tip to the band. I use a single strand of regular sewing thread for this -nothing bulky like the buttonhole twist I use for constructing the buckram form.

Marking the block printed fabric to cut out the truncated hennin

I decided to use a block-printed fabric that I printed a while ago while testing out paints. I marked the centre of a motif with chalk, and since the centre front is marked on the pattern as well, this was easy to line up.

I cut the pattern out putting seam allowance on all seams.

I also cut out a length of self fabric bias, and pressed it into double-fold bias tape.

I sewed the back centre seam by machine, and folded under the seam allowance for the top edge of the band and pressed it in place.

I whip-stitched the tip of the outer fabric to the hat, catching the padding. I used a long stitch for this. 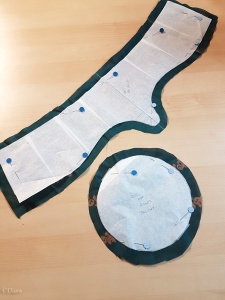 The truncated hennin cut out of green block-printed fabric

Then I pulled the band over the hat, and used an overcast stitch to sew the folded edge of the band to the edge of the tip – using as small and consistent of stitches as I could manage. I did this while away from home, so in retrospect I should have used green thread instead of black, but it’s ok.

Then I basted the lower edge to the hat, and then used the bias trim to finish that edge. 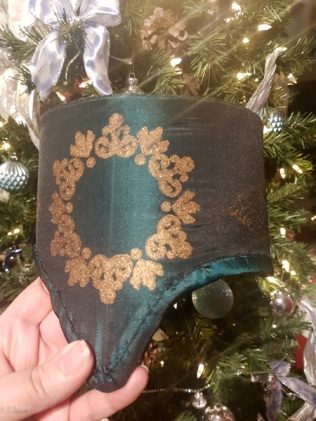 The outer fabric of the truncated hennin finished – just need to line this hat now. 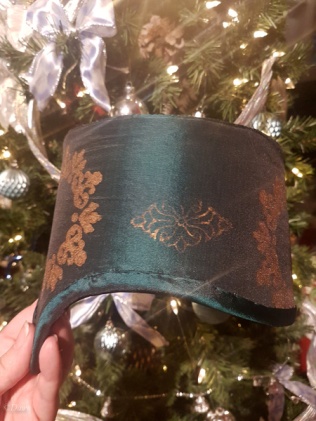 The outer fabric of the truncated hennin finished – just need to line this hat now.

At this point the outer part of the hat is finished, and it just needs the lining.

hand-stitching in the lining of the green truncated hennin

As you can tell from the photos, I constructed this hat at my boyfriend’s parents place over the Christmas holiday. It took a while to get re-inspired to come back to this hat… but in April I cut more of the green fabric (though not block printed) for the band and the tip. The back seam was sewn by machine, and I hand-stitched the tip and band together. Then I inserted the lining into the hat, and hand-stitched the lining to the binding.

The idea behind stitching the lining to the binding, rather than lining the hat and then binding it – is that if the hat needs to be re-lined (because sweat or oil stains the lining) it’s easier to remove the lining and replace it.

The truncated hennin itself appears in paintings/illuminations/etc from a variety of European places over a long tight timeline. 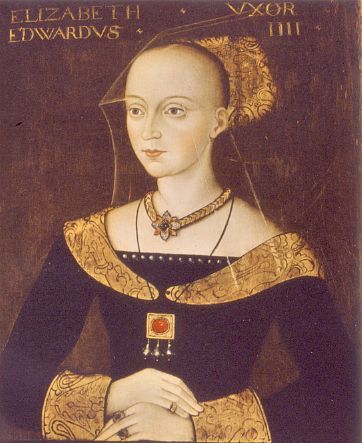 However, the style I’m striving to emulate is specifically from the portraits of Elizabeth Woodville – crowned Queen in May 1465, died 1492. Most of the paintings that I could find appeared to be reproductions of one another- the style of hat, dress, pose, the colours.. all similar over and over.

Unfortunately none of these paintings have notation about their origins (who painted them, and when, or if she sat for a painting or if these were pure imagination…)

The one shown to the right was noted on Wikipedia as being c. 1472 however, though it goes on to note that it may be a multi-generational copy, and that the museum that holds it holds many others in a similar style.

The gown is similar in style to some Burgundian gowns, but not quite.. and the headpiece is fairly unique in that the “front loop” appears to be built into the hat, rather than on a seperate band.

I’ve only found one other painting so far that appears to show a ‘grown on’ forehead loop, a Flemish religious painting by Hans Memlinc, 1435-1494. 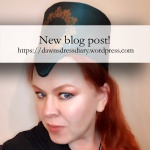