After my first round of wood-burned bling boxes, I decided I really wanted to make more – some as bling boxes for my various costumes, but some as sewing/gear boxes to hold various things particularly for my SCA play.

Although none of the boxes I bought (at the dollar store) are big enough for pretty much ANY of my spindles… I thought a spinning-related one would be nice either for myself or perhaps to give away or sell.

Top of the box

I enjoyed working on the viking themed # boxes so much, that I decided to make a few more. This one has an image that is based off a #medieval woodcut, featuring three women. One is drawing wool from a #distaff, another is using a niddy-noddy, while the third is working on a spinning wheel. . 🎨👗🎨 #pyrography #medievalCraft #woodburning #spinner #spinning #spinningwheel #diy #crafts #workInProgres #WIP #reenactorsOfInstagram #reenactment #reenactorLife #medievalart #SCA #mysca #SocietyForCreativeAnachronism

I looked for medieval woodcut images to inspire my choices, chosing this one featuring three women doing different stages of spinning. One is drawing wool from a distaff (though she doesn’t have a drop spindle to spin it onto… One is pulling spun yarn off a bobbin onto a niddy-noddy to prepare it for washing/dyeing I suppose. The third is sitting at a spinning wheel, spinning wool into yarn. 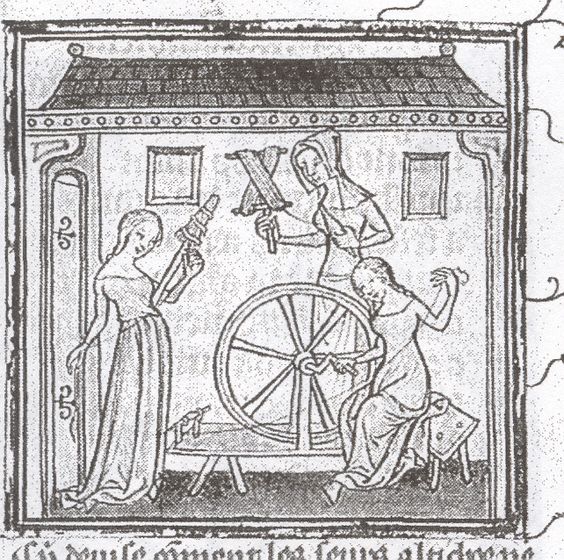 Since there is writing below this image, it must be from a manuscript, and since I found it on Pinterest, the description: ” Luttrell Psalter, British Library, London 14th c. England” isn’t verified.

This image, and all those below are pulled from the direct source – click the link for the original image. Apologies if the links break in future – since these are only reference images, I didn’t want to save and re-publish them.

I finished the box with two coats of “Tudor” stain, and then two coats of clear satin varnish. There’s no real shine to the finished piece, but hopefully it will be suitably protected.

There were quite a number of different medieval spinning-related images to choose from:
A woodcut taken from the ballad ‘Whipping Cheare’, from the Pepys collection, vol. I, no.208-109, c.1625 – This one is quite “rough” looking, but a bit later in period than what I want to do. This woman has what appears to be a hip-mounted/belt-held distaff and sits at a spinning wheel.

Another woodcut from the Pepys collection, vol.I, no.520-521. shows a woman in front of her home spinning on a wheel with a distaff above her head. Based on her peplum top, ruff and seperate skirt (or kirtle under her peplum jacket)  as well as the attire of the men in the background – I’m going to guess this is also from a far-later period than I’d like to do right now.

This next woodcut is rather interesting – again very rough and primative looking. It’s described as “A woman (Eve; right) with a drop spindle. Here begynneth the orcharde of Syon … (London: Wynkyn de Worde, 1519). EPB/1377/D, sixth part. Wellcome Images L0021219.” in an article on the Wellcome Library site by Jacqui Carey.

This woodcut described as “Elisabeth of Hungary, 1207 – 17.11.1231, Saint, Countess of Andechs – Merania, half length, spinning, woodcut by Hans Burgkmair” shows the saint, surrounded by other women. All of them are involved in spinning, while the main character draws from a distaff and spins onto a drop spindle. This image is awesome – but I think a bit too complex for my skill level right now.

This next woodcut depicts a woman and a girl (?) spinning with a distaff and drop spindle, while a man appears to be counting money. It’s listed as “from “Regiment of the young children”, Augsburg, Germany” on the Alamy stock photo website. Another Alamy woodcut is available through google images, but I can’t find the web page for it (it doesn’t link correctly.)

Two Burgundian depictions of spinning with a distaff and drop spindle are here – and I think I’d like to use one of these at some point too – if I find a box large enough to actually accomodate my drop spindles.  There are a number of other paintings/illuminations as well from later periods which would likely be just as easy to burn as the woodcuts.

Considerable other illustrations of medieval wool-working are on this GoldGryph article. This Pinterest board has more as well.