Preparing the screens for silk screening.

Alberta Culture Days is an annual event celebrating arts and culture throughout Alberta over three days at the end of September. If you’ve been following me on either Instagram or Facebook, you may have already seen some of these photos, from a silk screen workshop I took at the Natalie Gerber Studio at the King Edward cSpace as part of Alberta Culture Days.

There wasn’t a LOT of time for the workshop – there were so many things happening that day, and just enough time to dive right into each before heading to the next. Natalie didn’t talk a lot about silk screening, but instead got us to pick screens and prepare them right away. We taped off a border to avoid seepage on pre-prepared screens she had available, and smoothed our fabric onto a tacky padded table.

She had inexpensive dish towels available, but we could also bring our own fabric too. (I bought a tea towel, since the space was quite packed, and although I had brought fabric, there wasn’t enough room for the fabric I’d brought. 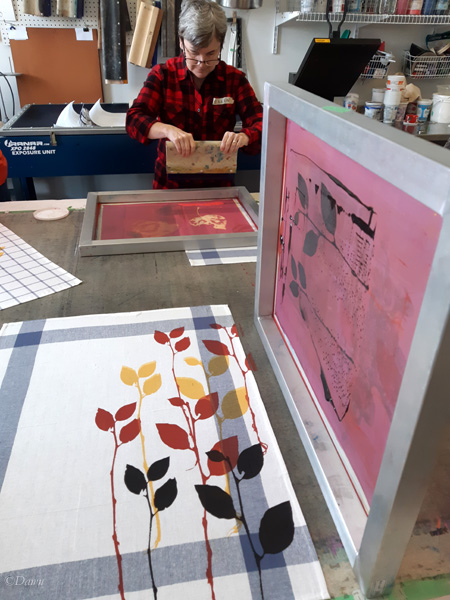 She showed us how to load our screens, and flood the printing space. Since we were only doing small items (rather than repeats on yardage), and time was tight, we didn’t have the chance to wash and dry our screens between colours… so she had us start with the lightest colour first, and work our way up.

She also had pre-prepared the inks for us, yellow, hot pink, rust, and black. I would have liked to watch her prepare the inks, because I’m curious if it was the same method I’d used at school… or something different. She does offer longer workshops though… where I’m sure more of this is covered. 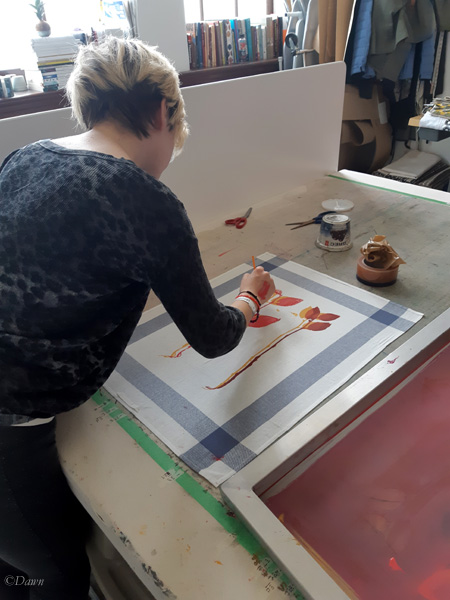 I opted not to use the hot pink, so with only three colours instead of four, I finished my towel quite quickly. I asked to take some photos of the class, including this student above who had some errors in her printing where there was not enough ink. I suggested using a paintbrush to fill in the gaps – something I’d done in school, and Morrigan from Adventures in Block Printing also taught me, when sometimes blocks don’t print as crisply as desired.

During Alberta Culture Days I took a mini silk screening workshop with Natalie Gerber at the @cspacekingedward art studios. Once I was happy with my printed tea towel… I turned the camera on my classmates! Here is Ellen printing hers. I haven't done silk screen printing since design school… and this totally made me want to get back into it again! . 🎨👗🛍👗🎨 #albertaculturedays #albertaculturedays2018 #calgaryarts #calgaryculture #screenprint #screenprinting #textileDesign #surfaceDesign #yycarts #yycculture #diy #videoClip #video #diyfashion #slowFashion #fashionfabric #workshop #artsandculture @natalie_gerber

Once we were done printing, Natalie’s studio assistant took the screens to wash them, and when the towels were mostly dry to the touch, they were hung to dry on a drying rack. When we went off to our next workshop, she also put them in a heat press to set the inks permanently… from here on in we’ll be able to just toss these in the washer and dryer. 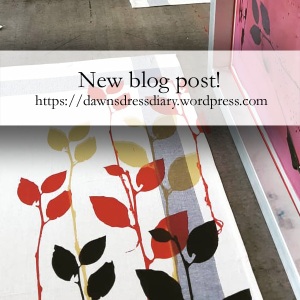 Want to see what else I’m up to (before I find the time to blog? Come follow me on Instagram.

If you want to see my blog posts when they go up, please consider subscribing. Since you’ll need a WordPress account to subscribe, which not everyone has… you can also follow me on my Facebook page. There I cross post links to all of my blog posts, so you’ll quickly see when new things are posted. I also post articles and other things there.

If you’re on Pinterest, you can also follow me there as well, though I often don’t update it right away after posting a new blog post. Maybe some of what I’ve pinned (my own work or that of others) will inspire you!

Looking for fabrics? I’m selling off some of my stash. In the next few weeks I’ll be adding more, and maybe some trims and notions too. Perhaps when I have the chance I’ll load up some finished items as well.