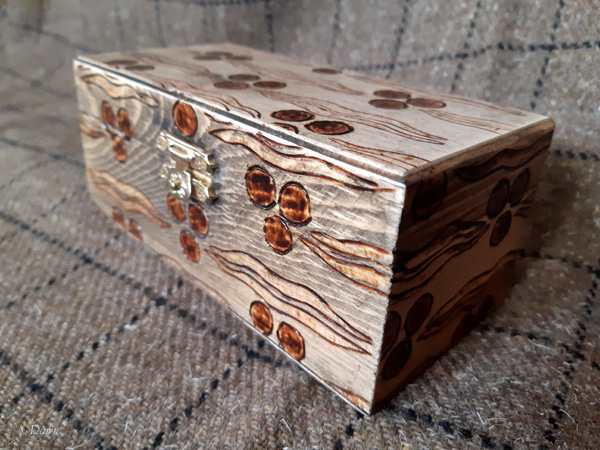 A while ago I made a large bling box with a design inspired by Ottoman garments to hold and transport the bling for my costume. 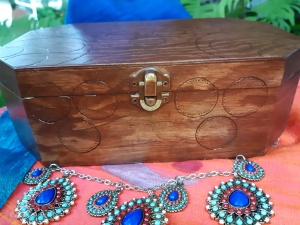 Although I love the garb for this costume, and am in the process of making more – I don’t have a lot of jewellery for this costume. Although I have a few accessories (hat, belt), they’re too bulky to all fit in the box.

Which… kind of makes the box less useful right now until I make more bling for this costume!

With that in mind, I figured I’d make a smaller box that can just hold the few pieces I do have – and it will fit inside the bigger one if I want.

Direct link from the Met Museum

I didn’t want to use the same design on the smaller as the larger, so I went back to Ottoman textiles to come up with a new inspiration. I liked this 16th century silk fragment from Turkey. This design is described as: “large-scale designs displayed within the ogival framework. This example incorporates an elongated tulip flanked by two wavy lines and divided by saz style serrated leaves centering tiny blossoms. Delicate carnations and tulips wind their way along vines inside the ogival lattice.” from the Met Museum website.

I am not entirely sure how I’d place this very vertical design on a box that is oriented horizontally though. I don’t want to rotate the design, and there’s a lot of detail to shrink down into an overall design to fit on the horizontal perspective.

I also really like this fragment of silk velvet from the second half of the 15th century. It’s described as a repeating tiger-stripe with a ‘chintamani’ design (the three circles). This is also from the Met Museum.

This would be far easier to work on the box in a horizontal pattern, and the design would work as a coordinate with my existing larger box. However, all those circles… oy. I had a lot of struggle with all the circles on the other one, and I’m not super keen on doing more of them again…

I decided to go with the tiger-stripes and chintamani design after all – I just thought it would work better on the shape of the box…. though at some point I’d be interested in trying the elongated tulip design on a square box.

I used the fine nib for the wood burning kit to outline the stripes and circles, then lightly shaded them with the same nib. (above) 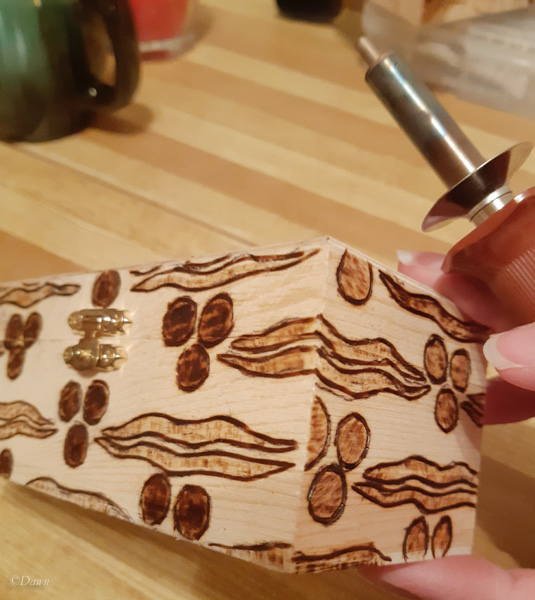 Then I switched to the flow tip and further shaded the circles so that there would be a bit of contrast between the two.

New wood burning project! As I have mentioned in the past, my Ottoman inspired wood burned box is too large for the limited amount of bling I actually have for that costume. I found a few of these small boxes at the dollar store near me, and so I picked this one to repeat an #Ottoman inspired design on. This design is based on a silk velvet from the second half of the 15th century, displayed at the Met Museum. It's described as a repeating tiger stripe with a #chintamani design. In this photo I have done all of the outlining, and have shaded in the motifs with the narrow pointed wood burning nib. . 🔥✂️📏🎨👗🎨📏✂️🔥 #pyrography #woodburning #woodburned #ottomanCostume #mySCA #SCA #societyforcreativeanachronism #DawnsDressDiary #calgaryblogger #yycblogger #cosplayBlogger #cosplay  #costumersofinstagram #costumeBlogger #crafty #DIY #jewelry #costume #blingbox #jewelryBox #jewelleryBox #tigerStripe #video #videoClip #yyccraft #calgarycraft #calgaryarts

After burning, I lightly re-sanded the box, and stained it with one coat of “Tudor” wood stain, and let the box dry for a few days. Then I lightly sanded it again, and used one coat of satin varnish to protect it a little more. I let it sit out in the garage for several days before bringing it inside, to let the scent diminish a bit.

If you are a WordPress user, please consider subscribing and following Dawn’s Dress Diary!