I was so happy with the Egyptian themed pyrography bling box and the amount of detail that went into it, that I decided to look at another design for something relatively complex as well (compared to some of my earlier projects). I decided that I wanted to make one for my German Renaissance costume as well, though at the moment I have NO jewellery to go with this (since the wide choker-necklace I want to make/buy I didn’t have time for when I created the original gown). 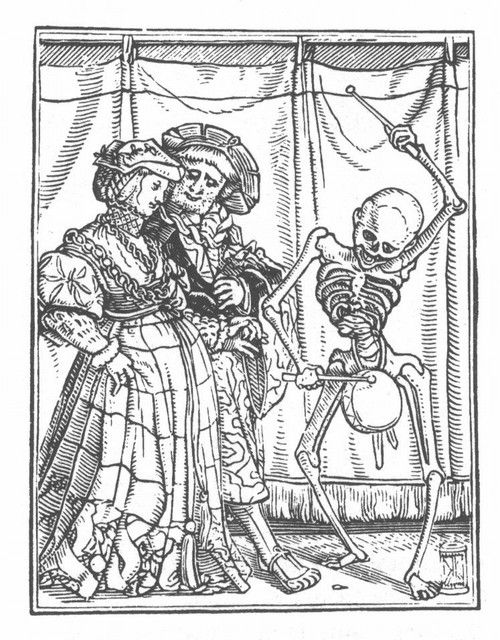 The image I chose for the top of the box is from Han Holbein The Younger’s series of the “Dance of Death” which may have been originally engraved around 1527 and were published in 1538. “It is believed that the original forty-one drawings on wood were all cut by Hans Lützelburger, who has been very properly called the ‘True Prince of Wood-Engravers,’ for, in the opinion of our foremost critics, these ‘Dance of Death’ cuts are the masterpieces of the art at that period, excelling even the work of Jerome Andre of Nürnberg on Dürer’s ‘Triumphal Arch.'” – http://gwydir.demon.co.uk/PG/Cundall/Engraving.htm

Dance of Death, The Astrologer Direct link from http://etc.usf.edu

I really like the idea of being able to stack these boxes on my bookshelf and being able to pull the right one without having to look at each of their tops… so I wanted to burn an image into the front of the box as well.

I chose another woodcut image from Dance of Death – this time Death & The Astrologer, found on the etc.usf.edu website. Certainly I wasn’t going to put all of this image on the front – but I selected just the skeleton  holding the skull, and digitally removed the background, duplicated and mirrored the image, and scaled it to fit on the front of the box.

Like the other boxes, I transferred the image to the wood with carbon paper, and used the small fine wood burning nib to burn the image into the wood. I tried using the shading tip as well, but couldn’t get it to work the way I anticipated it would have, so I also used the flow tip to add some shading. I’m still not great at it, but I’m feeling more confident with it.

After working on my Italian box and medieval kitchen box where the design wraps around to the sides too… I was feeling ambitious and wanted to burn an image on the sides as well. I looked for more skeleton/skull images from Dance of Death, but didn’t find anything *right*. I really considered putting the mirrored skeleton/skull images on the sides as well, but wanted something a little more simple.  I wanted a simple repeat pattern for the sides (and maybe the back.. I was still pondering that when picking an image) that would be relatively uncomplicated, and still from about the right time as the other images.

Adding shading to the sides of my German wood burned box.

Since this was from 1521, the timing is right, though the author was Italian.  I was still comfortable using the border on the base of the bed as the image for the sides of my box. I brought the image into photoshop, traced it, and resized it to be appropriate for the shape and size of the box.

After all the work I’d done on this box, I didn’t want to cover it all  up with a dark stain. Although I liked it on the Ottoman box, I felt it was a LITTLE too dark on the Byzantine box. However I feel for this that the light stain I used on the Viking age boxes like the bull box might be TOO light for this style…  I feel like the amount of grain that shows up might play a part in how I feel about the dark stains though.

Minotaur in a Viking-inspired style, woodburnt into a wooden box to hold my tablet woven trim or other goodies

pyrography bling box with an image of Egyptian Goddess Ma’at on the top, and Anubis and Bastet on the front.

The top of this wood burned box was based on a 11th century textile.

I opted instead to use the Tudor stain I had used on the Egyptian box. It has a sort of ‘aged’ feel to it, while still being light enough to see the detail of the burning.  I did one coat of stain followed by one coat of clear satin varnish to protect it against liquids/etc that the box might accidentally come in contact with. I stained the inside and the outside of the box.