For my next pyrography project I really was trying to consider WHICH era/time/place I hadn’t yet made a bling-box for.

I have costumes for:

But.. some of these I don’t have much bling for (not enough to warrant a box), some I might eventually have enough bling for (but not yet), and some I have SO MUCH BLING for…

And of course, some of these I have already made boxes for.

I decided to focus on the late 15th century, but although I don’t have a lot of bling for this time frame (most of the accessories I have are veils and enormous hats), along with an odd belt and I think one or two necklaces. I do however, have a need for a period-esque solution for transporting some of my feast bits and bobs… the plastic bags to wrap up dirty dishes,  the packages of salt and pepper, the wet naps, etc… 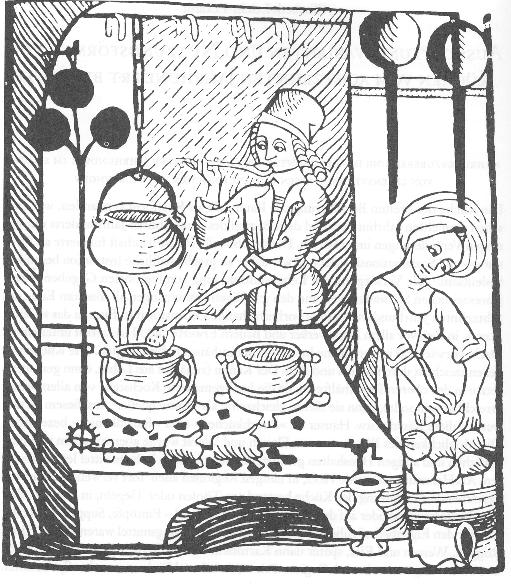 So, for this time period, I picked a kitchen/cooking themed image for the top of the box.

This image is called Kitchen with tiled stove, from: Kuchenmaistrey, first published in 1485 by Peter Wagner. This illustration is from the edition of Johannes Fischauer, Augsburg 1505. The image source is wikipedia.

I needed to make minor adjustments in Photoshop to adjust the scale and layout to fit on the square box.

Thinking about what I don’t have made me realize I need to find some imagery for a Finnish bling box as well – for my necklaces and bracelets. I have other accessories as well (mitts, apron panel, knife, etc) but I’m not sure if I’ll find a box to hold all of that!

With such a complex top of the box to burn, I wanted to make the sides a little more simple. I wanted a rather simple repeat pattern, not nearly as complicated as the Italian box I was working on at the same time.

I found this image from the University of South Florida, reported to be a medieval tile design for stained glass. However, the source has NO information of where this design came from, where, or when. Likewise, it doesn’t have the connecting bridges typical for stained glass.

There are however, some English medieval floor tiles c. 1250 illustrated on Hans Van Lemmen’s site of ceramics which are similar in complexity and the animal theme. I suspect IF this is an authentic design, it’s a floor tile rather than a stained glass pattern. There’s also a medieval tile from Glastonbury Abbey, England which has a similar lion (no date provided).

Like the other boxes, I transferred the image to the wood with carbon paper, and used the small fine wood burning nib to burn the image into the wood. I tried using the shading tip as well, but couldn’t get it to work the way I anticipated it would have, so I also used the flow tip to add some shading. I’m still not great at it, but I’m feeling more confident with it. I still have a long way to go though.

Although I loved the dark stain that I used on the Ottoman and Byzantine boxes, I was really nervous about losing all the detail of this box to a too-dark stain. I opted instead to use the Tudor stain I had used on the Egyptian box. It has a sort of ‘aged’ feel to it, while still being light enough to see the detail of the burning.

I did one coat of stain followed by one coat of clear satin varnish to protect it against liquids/etc that the box might accidentally come in contact with. I stained the inside and the outside of the box.

Pyrography medieval kitchen box – I really like how the sides lined up perfectly!