While going through my sometimes overflowing collection of fabrics, I started sorting out some of them into boxes of what kinds of fabric they were (green suit-weight wool, pale linen, etc) but some lengths of fabric quickly made me think of particular costumes, so I ended up bagging them together, hoping that they’d inspire me to SEW…

One of those fabrics was a black and white striped cotton that I received from my former teacher. There was about 4 meters of it, which was enough to make a late-period Turkish (Ottoman) Entari. When I was originally making my first Turkish costume, I wrote in my overview that this coat was:

“Medium-weight A or bell-shaped coat. Fitted to the waist and shaped with side gores with an overlapping front gore. Usually floor-length. Round or v-neck. Closed down the front with small buttons and loops or long frogs. Often depicted unbuttoned from neckline to chest and waist to floor. Most often with wide, elbow-length sleeves, though also shown narrow and wrist-length. Occasionally extremely long maunche-like sleeves with slits. Most often made of silk, lined in cotton. Rarely trimmed, but the inside edge was often faced with silk.”

Now, this was “often made of silk, lined in cotton” & “inside edge was often faced with silk”, and my version will be cotton, faced with silk – but at least there is support for the fabrics used together.

Also, although most period illustrations show either solid or patterned fabrics, and extant fabrics are patterned, I was able to find a period illustration showing stripes… so although it might not have been super common, it was fashionable enough to record. The garment isn’t quite the same – it’s an uppermost garment in this case like what I’m making, but the image below shows either sleeveless/cap sleeve (cut on), and with no front closures. Unlike a lot of the other garments I’ve seen, the one illustrated isn’t faced or lined with a contrasting fabric.

Another image, with a Court-lady smoking a pipe, there is another sleeveless, full-length striped garment. This one has the stripe going the other direction, and appears to be lined in a black and red striped fur… Unlike my project, this garment also doesn’t appear to have any front closures. 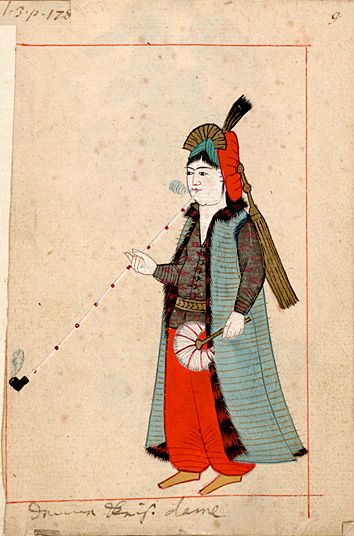 While many of my inspiration images show a shorter-sleeved overgarment, there is also evidence for overgarments with long sleeves, as illustrated below. In this image, the dark overgarment is fully (edge to edge) lined in blue, with some kind of toggle closure from neck to waist. 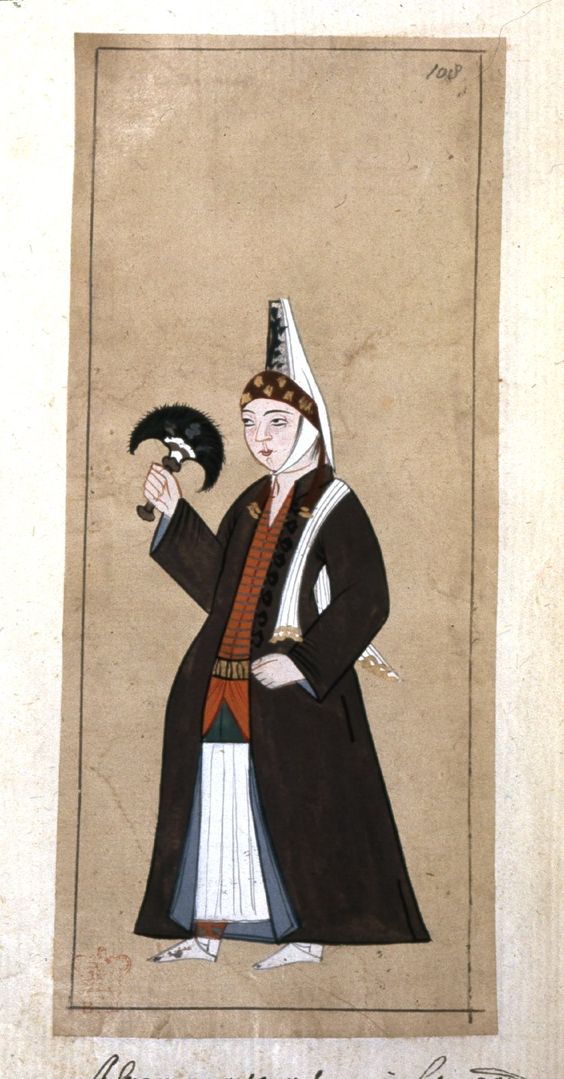 I’ve been quite happy with the cut and fit of bright pink linen Entari, so I just used the same layout pattern. I never cut a paper pattern – this is entirely patterned directly on the fabric using a series of measurements as a guide.

Marking the side skirt panels on the new Ottoman coat

I basically constructed the garment the same way that I had done before, sewing the panels together, gathering the hip panels, and then going to trim.

For the trim, I opted to use a very thin, smooth, slightly shot blue silk I bought at the Indian fabric store. This is a lighter blue shot with a darker blue, so the silk has some depth, but without a real shift in colour.

Pinning the silk toggles onto the striped cotton Entari

The silk faced the edges of the garment, along with facing the sleeve hems. I also used the same silk to make the button toggles. The strips for the toggles were made using my loop turner, which I think is probably one of my favourite sewing tools. (I also love my vintage mother-of-pearl handle awl, but I rarely use it because I don’t do a lot of hand-made eyelets….)

For my last Entari, I used pewter ball buttons. Later I found plastic ball buttons, and for this project decided to give them a try. I have a mild concern that the shiny coating will chip off with laundering, but the buttons are about the same size as my pewter ones, so they can be replaced if needed.

The Challenge: March 2019 – Sewing Kit: create an item that makes use of your favourite sewing tool, instrument, or gadget; or an item made for your historical sewing kit (huswif, pinball)

I used my loop turner for the button toggles – absolutely one of my favourite sewing tools.

Pattern: self-drafted based off previous research

Notions: ball buttons (plastic here, though I’ve used pewter before. Testing these out for longevity – weight and cost)

How historically accurate is it? The fibre content is documentable, however not necessarily in this orientation. The overall shape is accurate to garments seen in period visuals, and as described, though I don’t use an overlapping front panel as described (not seen in visuals I referenced).

Hours to complete: Unknown. I’m guessing an hour to ‘draft’ and cut, an hour for the basic construction, and several hours for the facings including hand-finishing, and a few hours more for the button toggles.

Total cost: The black and white fabric was free to me from a former teacher. The silk was purchased for another project. I used less than a metre, at about $8/meter. The ball buttons were in a pack with 50 or so buttons, for about $8 for the pack. I used 6 for this project. (However, I am prepared to swap them out with pewter ones, which were much, much more expensive.)

Selfie wearing my completed striped Entari and other elements of my Ottoman costume.