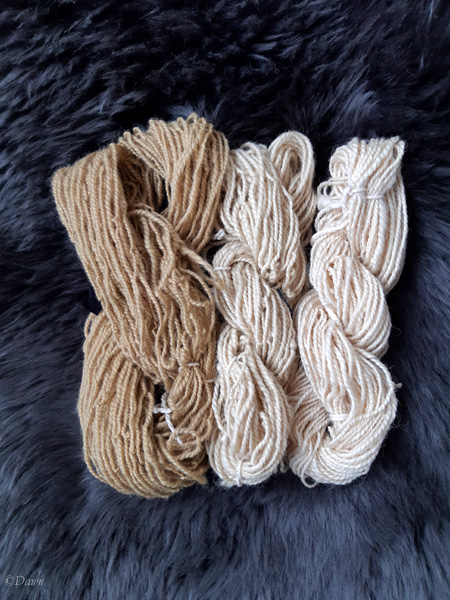 Along with chemical mordants like aluminum, copper, and iron, Jenny Dean also notes the use of staghorn sumac leaves, and oak galls as possible sources of natural mordants in Wild Colour: The complete guide to making and using natural dyes. These are rich in tannin she notes, which helps colour adhere and increases light and wash-fastness on vegetable fibres.

However, since I am LOVING spinning wool (and didnt’ love spinning hemp or flax that much in comparison) I really was interested to read about her recommendation for protein fibers – rhubarb leaves.

Jenny writes that rhubarb leaves contain oxalic acid, which helps when dyeing animal fibres. To extract the tannins/oxalic acid, she recommends simmering the plant materials in water, and then straining off the liquid to use as the mordant.

Jenny writes that the solution can be cooled and stored in a plastic container, but should be well-labeled as the solution is not safe for consumption by humans or pets. She also notes that if the stored solution grows mold, this can be skimmed off and the solution still used, though the scent may be strong.

After the solution has treated 2lb of fibre, it will be exhausted and should be discarded.

A short summary of rhubarb as a mordant on wildcolours.co.uk

In Wild Colour Jenny explains the use of rhubarb as a mordant, but also notes that it is useful as an acidic modifier, and a dye. In A Heritage of Colour, she expands upon this.

In A Heritage of Colour, she reports that acidic modifiers are less useful than alkaline ones; not tending to produce significant colour changes with most dyes. There are a few exceptions; acidic modifiers will shift madder from red to orange, and will make mustard shades more yellow.

Jenny writes that the root of rhubarb plants are very versatile, and provide shades of yellow, green, coral, and pink, harvesting the root when the plant needs to be divided. She indicates that the root is tough to chop when dry, so recommends chopping the root while fresh, and then using them fresh or dry. However, they tend to accumulate mould, so she recommends storing them in a paper bag in a dry place – or alternatively kept in the freezer which breaks down the fibres even more.

Rhubarb leaf can be used with and without heat.

A short summary of rhubarb as a dye on wildcolours.co.uk 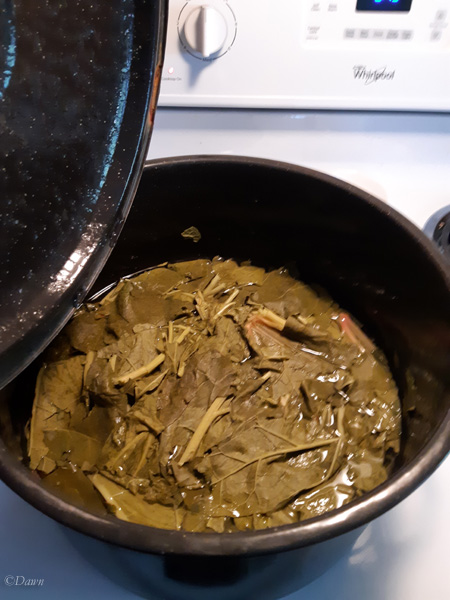 Ripped up rhubarb leaves in my dye pot on the stove

Unfortunately, I don’t have a rhubarb plant in my yard anymore. I had one years and years ago, but when we were re-organizing the backyard, we moved it, and it never really took hold in the new location, and eventually died. Since we didn’t really eat it a lot, we weren’t too worried about losing the plant, so never replaced it either.

This meant I needed to find a friend or neighbour who had a rhubarb plant!

On September 21, I went up the street to a neighbour’s house where they had rhubarb growing like CRAZY in their back alleyway. I cut off a number of leaves where it met the stalk and packaged them up to take home. I possibly could have worn gloves for this, but the plant didn’t bother my skin.

Once I got home, I ripped the leaves up into smaller pieces wearing gloves – aiming for pieces about the size of a playing card. I weighed them, and had 728 grams (25.6 oz) of leaves. I poured 12 cups (96 fluid oz) of near-boiling rain water over them, and let them soak in a sunny spot on my back porch for just over an hour. Then I simmered the pot on the stove for an hour.

In her blog, Caitlin Ffrench notes that oxalic acid is toxic, and this should ideally be cooked outside, not around small pets or kids. However,  I don’t have an outdoor cooking space, (BBQ, firepit, or hot plate) so I opened up all of my kitchen windows, our back door, and set a fan up to move the steam/fumes out one of the windows. I put my dogs in a back bedroom with two doors in between as well. I didn’t stay in the kitchen while it cooked either, only coming back to stir it every once in a while.

Throughout the cooking and dyeing, I could definitely smell the plant material cooking, though it honestly wasn’t terrible -more like cooking kale or spinach. It was far more agreeable than some of the other dyestuffs I’ve worked with in the past, even though I still avoided it, and left the windows open and fan on for a few hours after the heat was turned off.

After an hour of soaking, the leaves were broken down a little bit, but after the simmering, they broke down considerably, and were basically a mush. After the hour of cooking, I had to strain the liquid a number of times through a series of strainers (all dedicated to dyeing) to get the plant material out. The colour of the liquid was… interesting? It reminded me of split pea soup with the plant matter still in it, and sort of an olive green once it was strained.

While the rhubarb mordant liquid was still very warm, I wet my 2-ply handspun natural white Romney wool yarn (with warm tap water) and put it in, with lots of room for the wool to move. 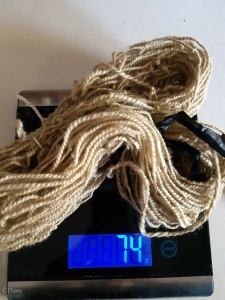 74 grams of handspun 2-ply Romney wool yarn after being treated in the rhubarb bath.

For this first bath, the yarn was 72 grams (2.6 oz) making a FAR higher leaf to fiber ratio than the 1:2 ratio recommended by Jenny Dean for mordant, or the 2:1 ratio she recommends for dye. (It’s more like a 10:1 ratio!)

I left the wool in the pot below a simmer for an hour, then pulled the yarn from the bath, and washed the yarn with tap water to remove the excess dye/mordant, and hung it to dry. Right out of the bath, it was sort of an olive green as well, but it dried to sort of a greenish mustard-yellow. Unfortunately although I’d prefer to dry the yarn in the shade, this actually sat out in the sun for a few hours because I went out and the sun shifted.. LOL

It’s actually not a bad colour, but I think it would be nice overdyed with indigo for blue/green tones. I would definitely consider this to be “dyed”, not just mordanted. 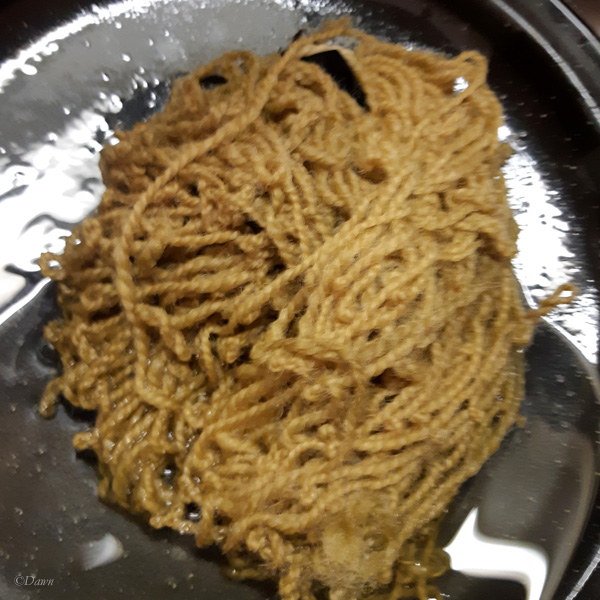 Rinsing handspun 2-ply Romney wool yarn after removing it from the rhubarb bath.

Since I knew my ratios were way higher than needed either as a dye or a mordant for my first round, I opted to grab a skein of 2-ply handspun natural white Masham long fibre wool yarn as well. I turned off the heat from the stove, and let the wool yarn steep for just a little over half an hour. There was still a lot of heat in the pot, but I didn’t want too much heat for this yarn, because it has such a nice silky hand. I didn’t want to full the fibers in any way.

Here, I also had 72 grams (2.6 oz) of yarn (weird!) but I presume that the first skein started to ‘exhaust’ the pot a little. After half an hour, the pot was still quite warm, so I hoped that was enough time. I pulled the skein from the pot, rinsed it, and hung it up outside to dry as well. (Mostly shade, but a little sun here too.) The colour after the yarn dried is a really lovely soft yellow with just a touch of green.

It’s a pretty nice colour as-is, but I think it will be really nice overdyed with oranges, reds, or blues. I’d say that this is closer to ‘mordanted’ than dyed compared to the other skein.

After taking the yarn out of this bath, I poured the solution down the drain, followed by lots of rinse-water from washing my pots and tools. I think I likely could have saved the solution for later, as it shouldn’t have been exhausted given the high percentages, but I didn’t really feel like keeping it. (And I don’t have a lot of empty mason jars left!) 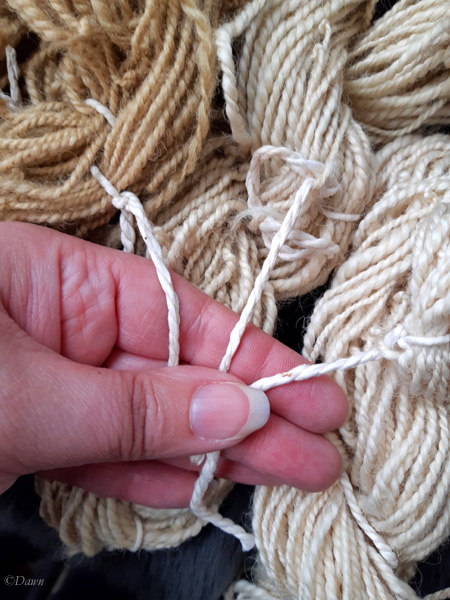 Strands tying off the wool yarn skeins made of cotton. the two on the left have gone through the rhubarb bath, the one on the right hasn’t been.

Now, I didn’t plan to “dye” cotton yarn. I read that rhubarb was best for protein fibers, and didn’t work well with cellulose, but as it turns out…. I tie off my skeins with cotton butcher’s twine.

I compared the two skeins cotton ties with an untreated skein… there’s almost no colour difference. Whether this works well as a mordant on the cotton as well – not sure. I’m guessing if none of the colour attached to the cotton, it likely means that the tannins which create the mordant didn’t bind either.

I think that I have two things to look into for this – of course, first is dyeing these mordanted wool yarns. Because of the scent issues of the rhubarb, I want to also ventilate the dyepot when I dye these too.

I also want to try some of the modifiers suggested, like the alkaline modifier to give shades of pink (or maybe even reds with strong solutions for long enough without heat), or iron to give mossy greens. I’m also curious about the grey-blue if the alkaline-modified wool is dried in full sunlight.

Secondly, I think it would be interesting to investigate a cold process for mordanting wool using rhubarb. In Local & Bespoke, the author writes about using the rhubarb leaf solution in a glass jar in a sunny spot… for 4 months! I think this is WAY longer than I’d like to devote, but being able to process the yarn without the heat (and smell) might be ideal…

Once I have the chance to do overdying and modifications, I also want to do some testing for lightfastness with these yarns as well, though that will have to come another time!