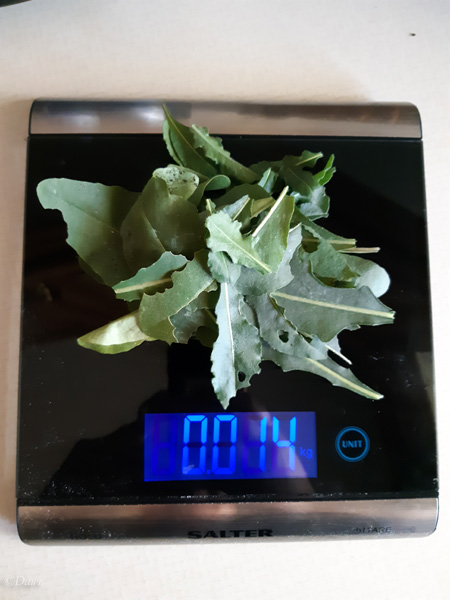 Just a small amount of woad leaves from my first harvest

Back last spring, I was excited to receive some woad seeds from a friend in Norway.

I’m unsure about the variety of woad these seeds were, but based on photos online, I suspected that they were European Woad ( Isatis Tinctoria ) versus Chinese Woad (Isatis Indigotica). The Chinese version apparently isn’t particularly good for dyeing, as it doesn’t have enough indigotin compared to the European variety.

I did some reading and learned that woad is a two-year (biannual) plant, with just leaves in the first year, and then flowers and seeds in the second. I also read that it is considered an “invasive” plant, as it can self-populate very easily with its seeds. 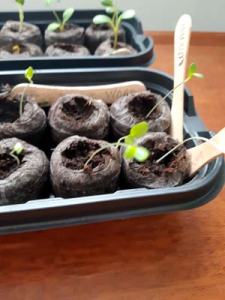 Woad seedlings starting to get leggy in their starter pods

I don’t have a lot of yard space for plants (at least not in good sunny areas, my yard is quite shady) so opted to plant the seedlings (started indoors because of our short growing season) in pots in the front and back yard. I’m not sure if they will return again next year, but I still have lots of seeds left.

Although I would LIKE seeds, to be able to grow more plants, I’m also not sure if I really WANT flowering pants, as apparently the plants with lots of flowers produce far less pigment for dyeing…

Seeing photos online, I expected lush, large plants with ample leaves. That’s not what I got. Instead they were all rather small plants, with the largest leaves about 20cm or so long, but most much shorter. By September, (but before frost hit) each plant had maybe 5-6 large leaves and then twice as many small leaves (smaller than 10cm long).

…or at least they would have had 5-6 large leaves… 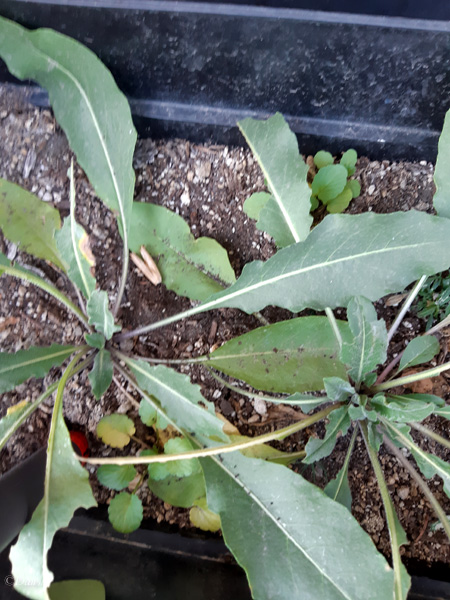 …But apparently caterpillars that I never actually saw on/near the plants got to ALL of my woad plants, and so instead, when I went to harvest the large leaves September 19th, (and a bunch of the small ones too since I couldn’t really be picky here..) I was only able to get about 14 grams (5 oz) of leaves from seven plants.

Doing the stovetop dye extraction method so often discussed in the natural dying groups I’m on, or the woad-ball fermentation method that I thought sounded super cool, just didn’t seem practical with such a small amount of dyestuff.

Instead, I referenced Ashley Walker’s post in Nature’s Rainbow about a cold-extraction method with indigo, which she also illustrated results using woad and the same method.

I rinsed the whole leaves in warm water to get rid of any remaining bugs or dirt. Then I ripped up the leaves into small pieces by hand (no staining on my fingers/nails, but a nice grass/spinach smell), and put them in a small plastic sorbetto container topped off with approximately 600mL (20 fluid oz) of hot tap water. I topped the container to nearly the top to reduce the amount of air in the container, and closed it up at 12:15pm.

In Ashley’s blog post she noted that she used hot tap water at 57 degrees Celsius – my tap water didn’t get that hot – based on my meat thermometer, I’m guessing it was closer to 35-40 degrees. 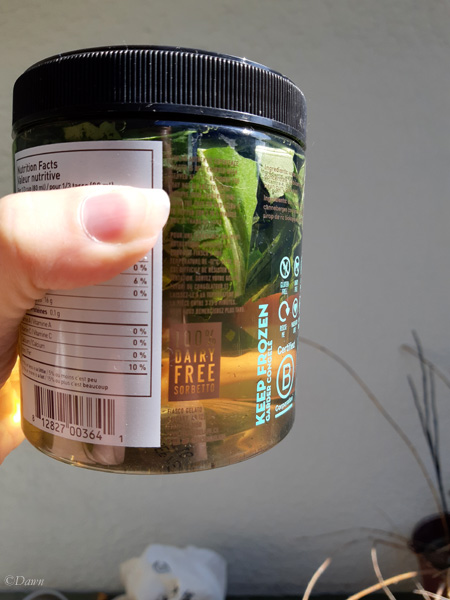 From there I put my plastic container into a black stock pot (my dye pot), and then that inside another black dye pot, covered the first pot with saran wrap (to create a bit of a solar oven) and put the whole lot in the sunshine on my back porch. I used two pots, to keep the bottom of the smaller black pot off the cold concrete. I wanted to put it in a sunny window indoors, but none of my window ledges in sunny windows at noon were wide enough for the plastic container. The temperature was about 10 degrees Celsius outside, with an expected high for the day at 4pm of about 15 degrees. (Welcome to Calgary’s autumn!)

In Ashley’s post, she notes that after an hour, her leaves were still green, though not quite as bright as freshly picked, and her water was a medium green.

I reviewed my jar after about an hour and a half, and the leaves were still fairly bright green – no noticeable difference. The liquid was a golden yellow in comparison though. While I didn’t measure the temperature (since it would have been irrelevant without the right kind of thermometer) the jar was still warm to the touch. 3 hours after putting the jar outside in the sun, the jar was still rather warm to the touch, the leaves were getting waterlogged, and the liquid was slightly darker golden yellow. 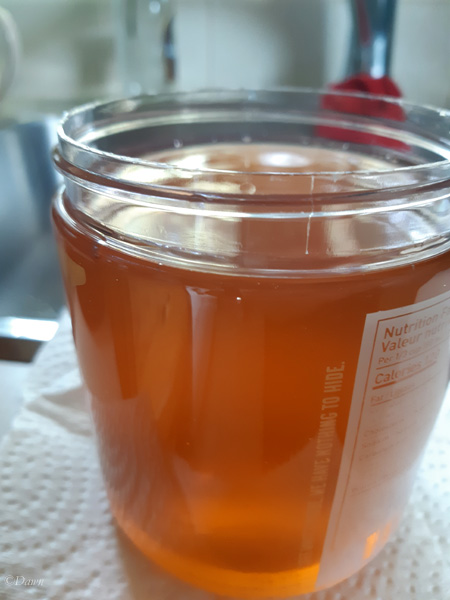 none of the tell-tale indigo scum at the top of my ‘dye’, after the woad leaves were removed.

After 24 hours, Ashley noted that her leaves had darkened somewhat, and there was a lot of indigo scum on the top leaves. Her liquid was grey with a blue tint, and the white plastic bucket she’d used was stained blue (how gratifying!) 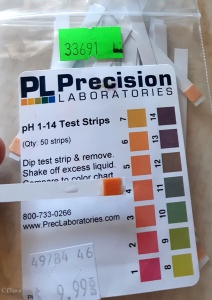 At that point, she removed the leaves, and added about 4 tablespoons of household ammonia to her bath (which was about 8 liters of water). This shifted the colour of the liquid immediately to yellow-green.

With the pH shifted, Ashley oxygenated the mix by pouring the liquid back and forth between buckets about 20 times, and saw the liquid darken to “nearly black” with a small amount that looked blue/green.

I figure mine sat for about 48 hours, but there was none of that indigo scum on the top of the leaves. I was pretty disappointed. The liquid was a peachy gold colour, but I thought that shifting the pH might help…

Now… we don’t keep household ammonia in the house, so I looked up alternatives. Wikipedia tells me that ammonia is moderately basic with a pH around 11.6. I have some wood ash lye that I made from a friend’s wood burning stove, and measured the pH with test strips at about 12. Pretty close!  I measured the pH of the woad mixture after removing the leaves, and it was at about a 4 or 5. 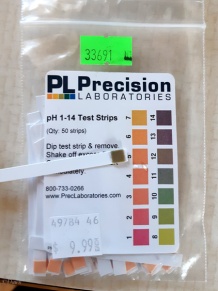 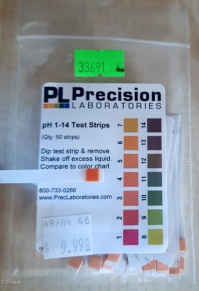 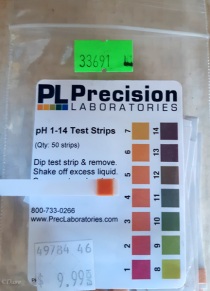 I put one tablespoon of the wood ash lye into the woad mix, hoping it would shift in colour… it didn’t. I added another. No shift. I added two more, and tested the pH. It was about 5. I added more lye, and still no shift.

I poured the liquid from jar to jar to aerate it… still no shift, no change in pH. 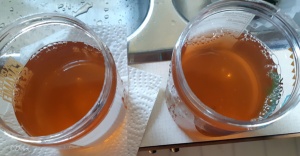 two jars of the woad solution, to pour back and forth to aerate.

At this point I was pretty much done. 😦 I cut off a chunk of commercially spun wool I got at the Grandmother’s Fabric Sale and dropped it in, letting it sit overnight. 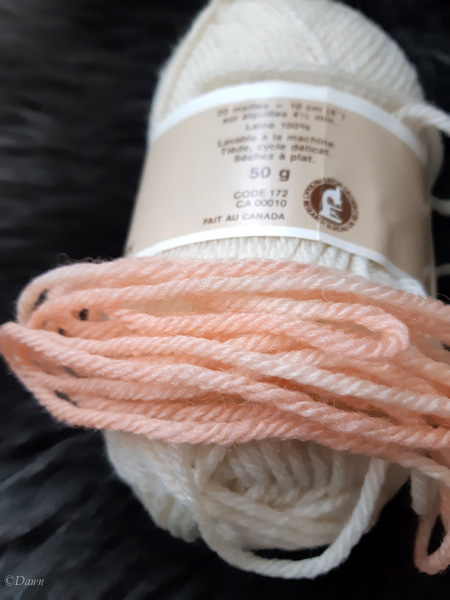 Pink wool yarn from my first woad experiment, along with the original ball it came from to compare the original colour.

Not blue. Pink.
From the peachy liquid, the wool emerged light pink. I rinsed it and the pink stayed, but I was utterly disappointed and utterly confused. I later read that you can get pinks and yellows from woad where the indigo has already been extracted.

All I can think, is that I harvested my woad too late in the season? Perhaps the seeds were too old? If you have ideas, please let me know in the comments below. 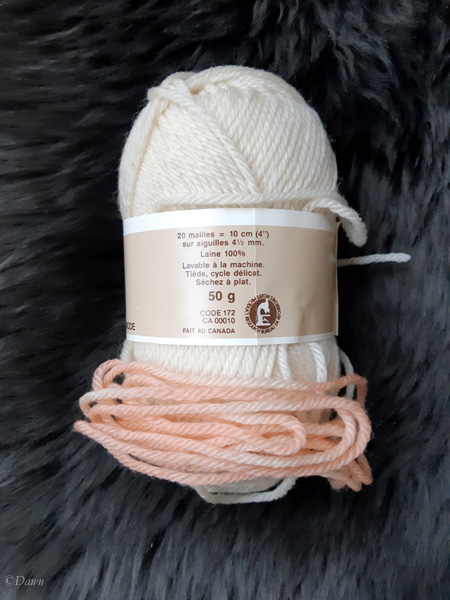 Pink wool yarn from my first woad experiment, along with the original ball it came from to compare the original colour.

Later on, I’ll try doing some light fastness tests on this pink wool… though probably not anytime soon.

Since I had nothing to lose, I put the leaves back into the plastic container, poured near-boiling hot water on top of them, and then put the container inside an insulated bag. I don’t have a small pot to cook such a small amount stove-top, so this was the best I could do to keep the heat high.

I went out for several hours, and came back – and the liquid inside was that same light yellow, with no touch of green or  blue as the original cold extraction. At this point I poured all of my mixtures down the drain.

I have… SO many thoughts about how to try this again next year.

First, I need a small pot for stovetop to work with smaller amounts of dyestuff. This will likely be relevant for a number of different projects in the future too. I’ll need to check out the second-hand stores the next time I have the chance.

For next year, I think I’ll try to grow my woad in closed greenhouse-like containers, or with some kind of pest-net to try to avoid the caterpillars. I never once saw the critters on my plants during the growing season, and only when harvesting found a big huge green one, to be certain it was the culprit. In a subsequent post on the Nature’s Rainbow website, Ashley also noted beetles, slugs, snails, and caterpillars are likely to go after woad plants.

I’m not sure if the huge amount of rain we got this summer (with fewer days with lots of sun, and more cooler temperatures) made a difference to the woad, but I’m guessing it did. I’ll need to do more reading about the ideal heat/sun/water combinations for woad – though I had hoped as an ‘invasive’ species it would be more hardy! 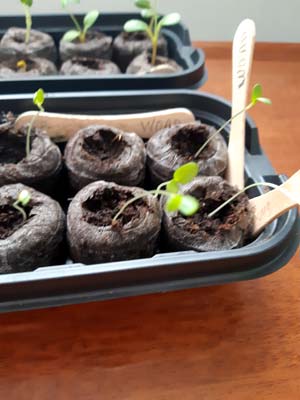 Woad seedlings starting to get leggy in their starter pods

I might also try to get them started earlier? In late May they were tiny spindly seedlings… so I’m not sure how to address that; starting them earlier, so they have a longer growing season, without having them get all leggy and weak.

Ashley also noted that woad plants need “copious quantities” of fertiliser, put into the soil before planting. I didn’t put any fertiliser in my soil, so that’s another thing I’ll need to try for next year.

Finally,  I need to get a different thermometer. The meat thermometer was insufficient to measure the temperature of my tap water. Not sure if I can find this at the second-hand shops or not… 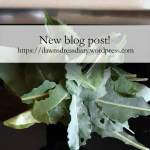