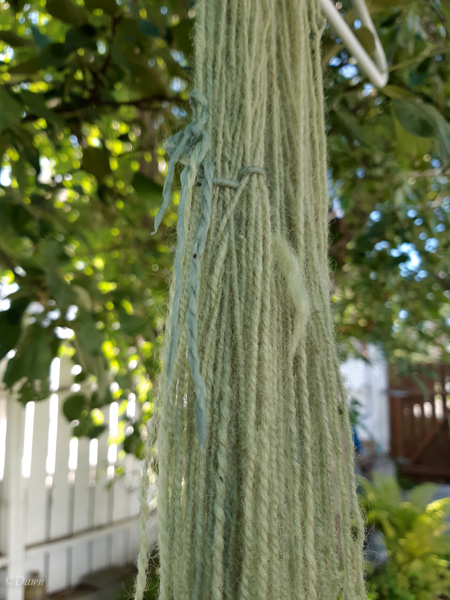 It seems like greens are difficult to get with natural plant dyes, so when I read that green (even bright acid green!) could be obtained with Lupine flowers, I wanted to try it.

We have had lupine growing in our backyard for years – the flowers seem to be a favourite of bees, and they are a dramatic, beautiful, colourful flower. I read on The Easy Blues that lupine is originally a North American plant, though I remember being in Vantta, Finland and seeing vast fields full of them… they self-seed, and the seed pods POP sending the seeds all over the place, so apparently there they’re almost treated like a very pretty weed.

So.. this definitely isn’t a Viking Age dye plant, and not medieval for Europe either, but I’ll add them to the category with Avocado – fun to dye with… and free!

Another photo of my rain-soaked backyard the other night close to dusk. . Purple #lupine… these fill up the area near our water barrel. . . 🌳🌧🌱🌧🌳 . . #aesthetic #backyard #backyarddesign #gardeninglife #gardening #garden #rain #summer2019 #plants #plant

In the spring I started a number of lupine plants in seed starters and got them into pots once it was safe to so so. Unfortunately… either the squirrels or magpies had other ideas, and more than half of them went…missing. The established plants from previous years returned though, and by the time they went to flower in early/mid June, the new plants were WAY behind. I was concerned that the flowers I had would go to seed before the new flowers came in, so I ended up picking some of the purple flower heads (along with two pink ones too)   in mid-June, and put them in a paper bag to dry.

Since the bees seem to love these flowers, I didn’t pick everything; I left a few of the flower heads for the bees.

Finally in late July I picked two more (and put six more in a bin to collect the seeds, as they’d already lost their flowers) and filled my dyepot with water from my rain barrel.  I hope that next year I have more plants that flower… and although I think I’d get better colour from fresh flowers, will likely have to collect the dried ones as they bloom fully, and be more alert to catch them before they go to seed.

I brought the pot with the flowers (on the stem, but no leaves) and rainwater to just below a boil for half an hour, and then let it lightly simmer for another half-hour. From there I extracted the plant material, and let the dye liquor cool a little.

I had only put in enough water to cover the flowers, so there wasn’t a lot of dye liquor. I hadn’t weighed the flowers either (since most were dry and two were fresh, so it wouldn’t be useful for future anyways) but I didn’t feel like I had a lot of dye. I put one skein of handspun Romney wool two ply yarn into the dye pot, but there was too little liquid.

The handspun Romney wool yarn was pre-mordanted a few days earlier with Alum. I wanted this to be as green as possible, so I didn’t want to shift the colour too much towards yellow by using wool mordanted with the oak galls I had experimented with earlier.

Starting the lupine dye in a mason jar.

Instead, I transferred the (still warm) dye liquor and my yarn into a mason jar, and put it in my (black) dye pot in the sun in my backyard. I wasn’t too hopeful – the dye liquor was sort of an amber brown colour… what I had read online indicated it would be a rich aubergine – so I thought perhaps I didn’t have anywhere near enough flowers. 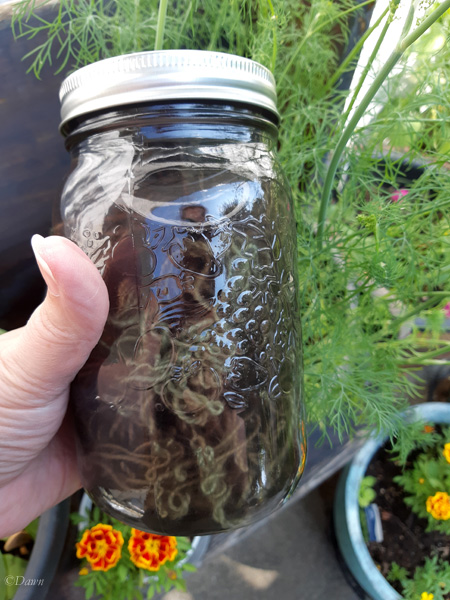 However… when the wool went in, the colour appeared on the yarn… sort of a muddy brown to start, but then shifting to a sage green. I rotated it every half hour for about two hours, and then rinsed it (with a little vinegar). I found very little dye came out of the yarn, and the resulting shade was a lovely sage green!

While the first skein hung to dry outside in the shade, I put another skein into the mason jar. This steeped for about 4 hours, but the day was cooling off as well. This came out a fair bit lighter – more of a light celery green.

… I tied off my yarn skein  with cotton butcher’s twine – check out how blue-green the cotton went!

Maybe for next year

I found out that in spring, the lupine leaves are also great for getting green – in particular the acid green I really was enthusiastic about. I planted more lupine plants in my garden this summer as well, so hopefully next summer they’ll come back bushy so I can safely harvest some leaves!