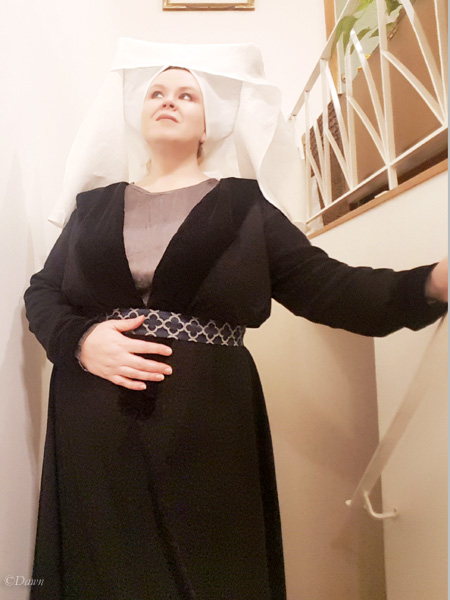 While constructing the thid version of my horned hennin, (which isn’t complete yet…) I was struck with a different idea, so kind of dropped that project (for the time being) and went back to the drafting table.

I wanted to continue on the path trying to make a collapsable and packable hennin, and decided that for this one I would do an all-white hennin, like some of the inspiration images from the research I did when constructing my second version of a horned hennin in red velvet.

Drafting a fourth version of a horned hennin hat

I used the existing pattern and then made some significant alterations to the horns, which also meant needing to re-draft the center gusset as well. I had learned a lot in the pattern development for my second horned hennin, so this process went very quickly, and I didn’t actually even worry about sewing a mock up or mocking the pattern up in taped-together cardstock like I did when developing the second horned hennin.

Cutting my fourth horned hennin out of grey melton

Like the third version, I cut the main ‘structure’ for this hat from wool melton. Since I’m not using steam-shaped felt, buckram, or wire for this hat, I’m considering it a ‘dressmaker’s hat’ instead of millinery.. it can be entirely sewn by machine (except for the hand-finishing I’ll be doing since this is intended to look like a medieval hat.)

I used grey melton so that the colour would transfer less through the white linen. I didn’t have any white melton in my stash, and the white wool I have in my stash is already allocated for something else – and is too light for this project without further fulling.

Based on Fabrics-Store’s linen, I’d estimate this around 3-4 oz/yd, though I bought it from a different seller who doesn’t note the weight of the fabric.

Pinning the linen pattern pieces to the wool

I cut the pattern pieces out of wool, and white linen. I think that the wool was purchased at one of the Grandmother’s Fabric Sales, and the linen was purchased as a full bolt with a fantastic sale online. Both were pre-washed in advance. 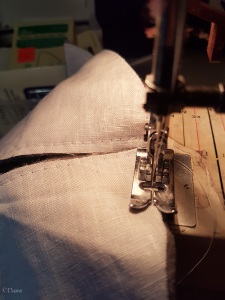 I machine-basted the fabrics together – this would prevent one fabric from creeping out when I sewed the pieces together to form the hat.

Since I’m sewing a convex to a concave curve, there’s ample opportunity for possible shifting… this basting likely saved me headache and unpicking down the road….

From there I sewed the hat together, just as I had on the second and third versions of my horned hennin, leaving the center front and back somewhat not sewn…. because as I was sewing them I realized that I needed to trim the edges before finishing the seam. LOL 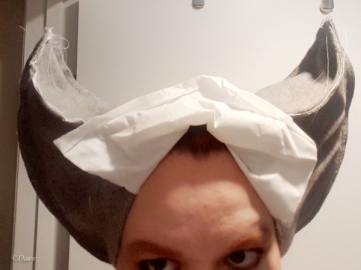 Trying on the wool and linen horned hennin before turning it. The tissue is there to protect the white linen from my face oils and make up. 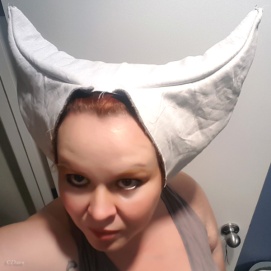 Testing out the fit after turning the horned hennin right side out.

At this point I REALLY wanted to see what the new shape looked like – so I tried on the hat – without even turning it right side out. (I put a piece of tissue at the centre front to protect the white linen from my make up and any oils on my face. I LOVED the shape…

I turned it right side out… and the shape isn’t quite as dramatic, but I still love it.

Even better- it didn’t seem to sag, flop, or collapse at all (unlike my third version before top-stitching). Yay!

So..back to the sewing machine! From some of the leftover scraps of white linen I cut bias strips, sewed them together, pressed them into place, and sewed the strip on right sides together along the edges by machine.

Hand-sewing the interior of the self-fabric linen bias tape to the fourth horned hennin.

From there I turned the bias to the inside, and whip-stitched it by hand to the interior of the hat.

The hat will be lined AFTER the hat edge is bound… for a really good reason. If the hat’s lining needs to be removed, the order of construction will make this much easier. However, given that it’s a completely soft hat, it should be entirely washable (gently by hand of course) so that shouldn’t really be a factor… fingers crossed!

Just like top-stitching the side seams of the third version (not yet done) of my horned hennin made the side seam crisper and more structured… I thought something similar might help with this hat as well. Originally I started by top-stitching the side seam allowance down with pearl cotton. I thought I’d do a decorative white-on-white stitch here… but as I sewed… the thickness of the wool made it really tough to keep the stitches even. I looked at it from the outside, and didn’t love it…

so I ended up removing the top-stitching in pearl cotton. 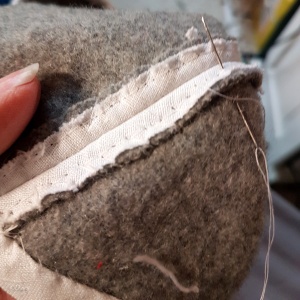 Instead, to add structure to these side seams I whip-stitched the seam allowance down to the interior of the hat.

Horned hennin version four with a heavier veil – it doesn’t quite work.

I had my lightweight linen (2.8oz) veil on my red horned hennin and so I had a new veil that I thought I’d try with this hat…

The new veil linen is a bit heavier linen than my light one – and it’s just too  heavy for this hat. The sides collapse a little bit with the heavier veil.

So.. I had two options – add some kind of support into the structure of the hat – and possibly make it less packable and collapsible (and perhaps washable) than I’d really like – or make a third veil – with much lighter fabric. 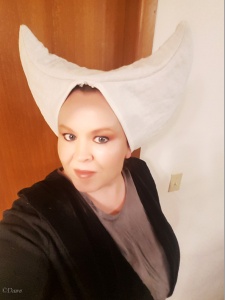 White horned hennin with boning added to the side seams.

The Tudor-era cap of maintenance (discussed in my PDF documentation for my horned hennin) discusses baleen used for boning to support the hat. Although its far later in time than this hat style, I decided to use boning in the curved sides of the hat to support it. I unpicked the bias trim at the sides, tucked some boning into the bias, and re-stitched it. I stitched the boning to the seam allowance all the way up the side seams to the pointed tips. At this point the shape was even crisper – but this will still make a hand-washable, totally packable and collapsible horned hennin.

I should note that the boning comes with a slight curve to it, as it came off a roll. I sewed the curve on the opposite direction on the wrong side of the hat, so that it would curve the correct way while turned right side out again.

I was thrilled when I added the heavier linen veil that the boned ‘horns’ support it really well!

At this point I took a bunch of photos – without lining the hat. I wanted the unlined hat available to show judges at the A&S competition at Twelfth Night, but also wanted to take photos in my pretty new V-neck Burgundian dress!

As it stands… I haven’t actually lined this hat yet – because after showing it to the judges I thought it made a REALLY good example piece for future displays. It’s totally wearable without lining; I just put a small linen cap or band on instead to protect the interior from oils from my hair/skin.

The Challenge: July 2020: No-Buy: Make something without buying anything. Whether it’s finishing off a UFO, using up scraps of fabric from earlier challenges in the year, sewing entirely from stash, or finding the perfect project for those small balls of yarn, this is your opportunity to get creative without acquiring more stuff.

Since the linen, wool, and boning were all leftovers from other projects, or stash (or in the case of the wool – leftovers from someone else’s project and pulled from my stash) this meets the challenge…. and is the first HSM of 2020 I’ve been able to do! 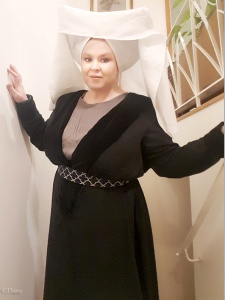 Pattern: self-drafted based on my version 2 and version 3 horned hennins and alterations from those experiments.

Notions: Thread, self-fabric bias tape (so.. is this a notion? LOL), boning.

How historically accurate is it? The pattern is based off illuminations and paintings and my speculations about how they were developed. The construction is half machine sewing and half hand sewing.

Hours to complete: approx 3 (before lining)

Total cost: The linen was on a great sale for $4.95/yard (USA site plus shipping) but the hat took scraps left over from the new linen veil I made. It took less than half a meter. The wool melton was from the Grandmother’s sale where I pay $1/meter. Here too I used less than half a meter. When (if) I do decide to line it, I’ll use the same linen most likely