upcycled mirror frame in my bathroom

A while ago a friend-of-a-friend was downsizing her house. Like… a LOT.

She was moving from a four-bedroom above grade, two story (plus full basement and two-car+ garage) to a one-bedroom secondary suite. Also.. she had been a “collector” of multiple things for a number of years, and although she’d been destashing for a few years, there was still a LOT to destash as she was moving.

This meant that she had a bit of a free-for-all house pillage, where me and a few friends went in and picked out some of the things she couldn’t take with her that we might be able to use, before it would all be tossed into a garbage bin. Of course, this also happened during Covid19 pandemic, and thrift stores weren’t accepting donations, garage and estate sales were not happening, and other challenges existed.

(I also took home probably 6 big bins worth of things to give away to friends who couldn’t join me as well – so a LOT of stuff has found homes… though I still feel bad for the amount of perfectly lovely stuff that was left behind that will no doubt just be bulldozed and thrown into landfill by the house’s new owners 😦 There was only so much time to go through the house, and so much stuff (like… three pianos….) were just trapped behind too many other things to be able to carry out. )

She is an artist… and this meant along with lots of canvas’ (which my mum, also a painter, took) there were also LOADS of frames. Some were plain and ordinary photo frames, but many were those gorgeous, decorated, molded gilded frames.

upcycled mirror frame in my bathroom

Now… I love the LOOK of those gilded frames, but they utterly do NOT fit my aesthetic. I have a few others from other sources (from when I was a teen!) which I’ve all painted silver and did a black wash over to imitate tarnishing.

I decided to do the same with these – in two variations.

For the frames with glass, they were easy-ish to disassemble (some had really wretched prints in them which had to go) but many with mirrors were pretty permanently attached, so those ones I covered the mirror with paper and taped it down to mask off the mirror. 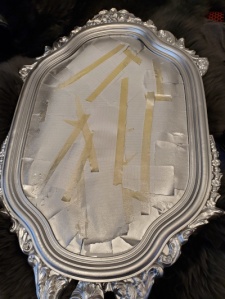 taping paper over the mirror and then spray painting it silver

In the case of this big one, after painting it, I actually still had to disassemble part of it because it turned out the mirror had gotten a bit loose in the frame so I needed to put some caulking in, and then re-paper the back of the frame. Had I known, I would have just taken the mirror out to begin with!

frames before and after (below, above) the black wash

For my bathroom (where I already have one of those older frames hanging as a mirror) I first painted them black with one type of paint, and then a second coat which reacted with the first to give a textured effect.  Then I sprayed them with two coats of silver.

After that, I did a wash of watered-down acrylic black paint which settled into the crevices, giving more depth to the frame.

For my bedroom, I went with all-black, and I love the gothic luxury of these.

Of course, this means I need to get glass (or mirror) for some of the frames that did not come with glass, and need to select some artwork to go into them. I think they’re going to make a gloriously gothic portrait wall in my bedroom 🙂  So.. hopefully in the future I’ll have some  pretty bat embroidery, spider cross stitch, or sculpted skulls to frame up in my bedroom and share the progress of on my blog.

Of course, once my wall is up – I’ll try to remember to add updated photos to here – but if I forget, I’ll no doubt post them on my Instagram – so please come follow me there!